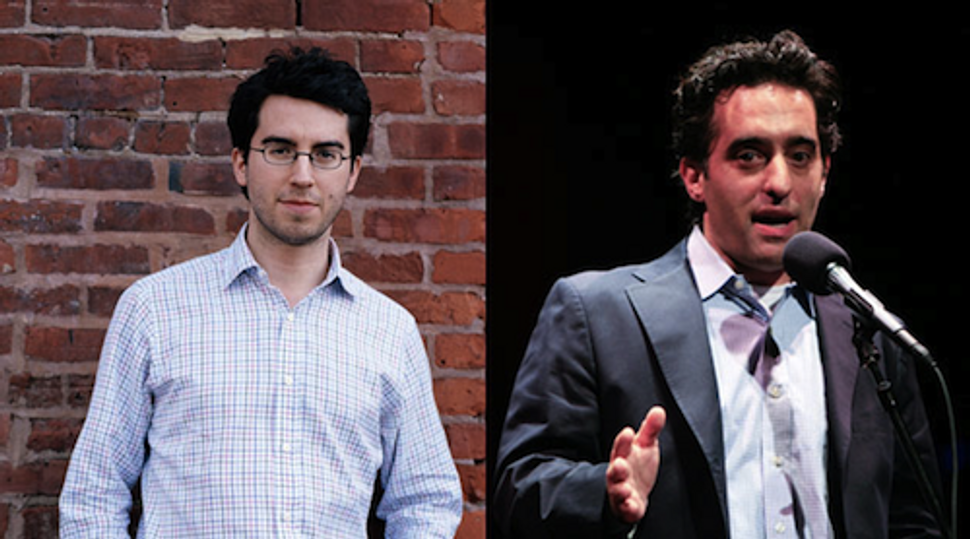 Kathleen Peratis wrote in this Sisterhood post that she seriously considered taking her 24 copies of “New American Haggadah” back to the bookstore, after she realized that the Passover manual doesn’t use gender-inclusive language. I’m clearly expecting fewer seder guests than is Peratis. I own one copy of the aforementioned Haggadah, and have every intention of keeping and using mine.

I wonder whether the fact that it is titled “New American Haggadah” is what troubles Peratis and other feminists. After all, the United States gave rise to women’s lib; it’s where Title IX is the law of the land, and where the widespread rabbinical ordination of women took root.

But for me, it is precisely because of the fact that this new Haggadah, edited and translated by leading (male) literary luminaries Jonathan Safran Foer and Nathan Englander, was published here that the use of the traditional male-oriented text is totally acceptable.

We, unlike our fellow Jews in other countries around the world — including Israel — live in a Jewish community that widely embraces pluralism. We have as much of a right to put an orange on the seder plate and a Miriam’s Cup on the seder table as to speak of the Four Sons — and not the Four Children. If it doesn’t work out for us with one particular Haggadah, there are plenty more Haggadahs in the sea.

I do, however, think that Foer is somewhat disingenuous, writing in the introduction to his Haggadah: “[T]here is nothing uniquely American about it.” To be sure, there is a tradition of simply naming Haggadahs after the place in which they are made. But aside from artist Oded Ezer, all the contributors to this Haggadah are Americans and naturally bring an American sensibility to it.

My friend Ellen Bob, for many years the proprietor of a Jewish bookstore in Palo Alto, Calif., recently heard Nathan Englander speak to an audience at Stanford University about his translation. “I was astounded that he acted surprised to be asked a question about the gendered language,” she told me. “His response was as if this wasn’t a choice on his part.”

So we could spend our time wondering why these young(-ish) Americans chose not to reflect the more egalitarian Jewish world in which we live today. Or we could appreciate the “New American Haggadah” for what it does offer: contemporary, resonant commentaries; a striking but spare graphic design that purposely does not upstage the text, and Englander’s accessible, powerful and poetic — though sexist—translation that interprets the original Hebrew and Aramaic text differently than other ones. Perhaps it comes down to the simple fact that while you can take the bocher out of the yeshiva, you can’t take the yeshiva out of the bocher (Englander, now a self-professed “God-fearing atheist” had an Orthodox upbringing).

My friend Ellen pointed out to me that the market for this Haggadah is unclear. It seems to be aimed at non-traditional Jews, but aren’t those the ones who rely heavily on the translation— which, in this case, likely does not mesh with their sensibilities and meet their needs?

Foer writes, “Like all Haggadahs before it, this one hopes to be replaced.”

Peratis and others may choose to stand their feminist ground and replace it even before using it. I, on the other hand, am willing to give it a try. It will coexist at my seder with the orange and Miriam’s Cup — and several other Haggadahs, too.