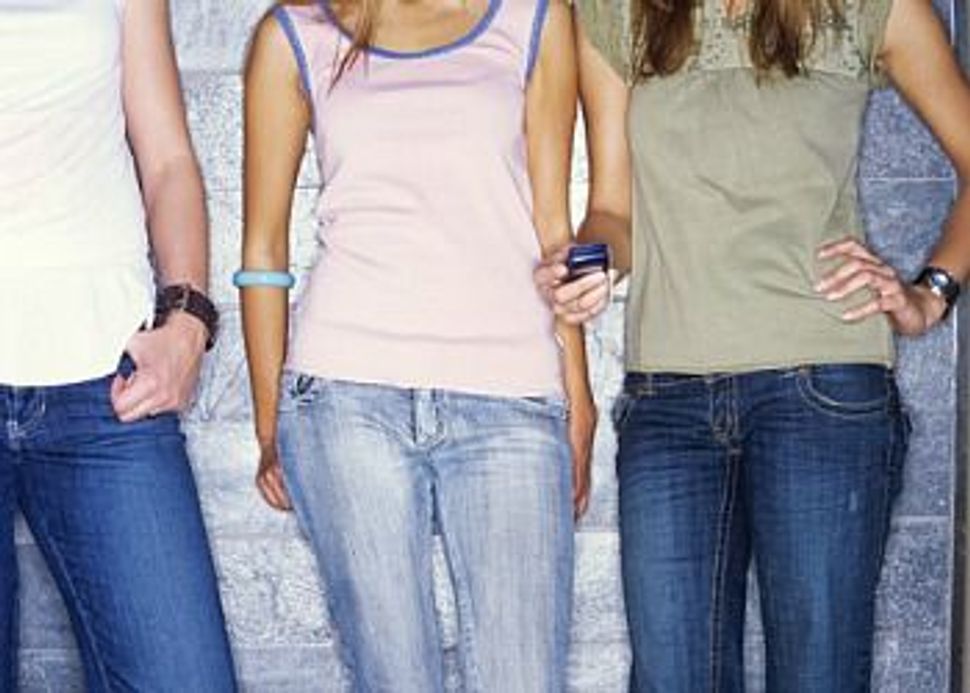 I remember the first time I tried on jeans. I was at camp in Israel, and I’d found a pair in some store. My friends urged me to try them on, and I did, prancing around the room, admiring myself from all angles in the corner mirror, glowing from their compliments. Eventually I slid off the jeans and folded them back up, wistfully slipping on my knee-length skirt instead. I didn’t look as good. It was a fact. But my soul was safe, shielded by a barrier of protective material.

As a Modern Orthodox woman, that wasn’t my first foray into the world of forbidden fabrics. Throughout my middle and high school years, my friends and I spent hours in the dressing rooms at Nordstrom, trying on prom dresses that showed off our shoulders and developing cleavages. Occasionally we’d even try on miniskirts, giggling about how naked we felt, wondering how other women walked around with so much bare skin showing. But there was always the envy, the smaller parts of us that whispered, “Why not? You look so good.”

It’s both easy and difficult for me to empathize with Judy Brown’s article about stockings. She wore what she was told to wear — yup, been there, done that — but she actually liked it. She wanted to wear skirts and pantyhose. She refused to like jeans when she tried them on. I used to wear pantyhose once a week to synagogue, and those few hours were enough to drive me crazy. I was constantly distracted from my prayers to surreptitiously shift my waistband around. I have nothing but admiration for a woman who finds herself more comfortable in pantyhose than out of them; that, to me, is the mark of a strong person. Even stronger, perhaps, is the woman who despises the feel of skirts, sleeves and stockings, and chooses to wear them anyway. I am not this person, but I envy her convictions.

Yes, it sounds silly to say that a woman’s spirituality can be measured by the clothing she wears. And yes, the extent to which many communities take that measuring stick is ridiculous. But behind these beliefs lies an actual logic, a real understanding of human nature. Wearing a modest skirt may not make me a better person, but it’s less likely to make the man next to me turn and stare at my legs. It may also keep me less focused on my own appearance so that I can concentrate on other things. And, indirectly, it may actually protect my soul, however you define that.

I don’t like when people judge others by how they dress, or when communities get so personally involved in someone’s clothing choices. If my rabbi approached my husband about what I was wearing in my own yard, I’d almost definitely move. The very next day. And I wholeheartedly agree with the rabbi who believes that obsessing over clothing isn’t nearly as important as focusing on other, more important aspects of Jewish observance. But no halacha should be trivialized simply because it sounds absurd. If it is, I think we should start with the one where we blow a ram’s horn on specific occasions.

Though I see the beauty behind the laws of tzenua, the desire to look like ‘them’ and dress like ‘them’ has always had a strong pull over me. Is the difference between Ms. Brown and myself the result of our different forms of Orthodoxy? Does the sheltered world of right-wing Orthodoxy truly protect its members from the pull of the secular world, while the fragile balance of Modern Orthodoxy exposes its observers to temptations that halacha denies? Still, there are right-wing Jews who leave the fold, and Modern Orthodox Jews who are true leaders of this generation.

Maybe there’s no lesson here about the cultural disparities between ways of Jewish life. Perhaps it’s just a personality difference between two women who try to live the dual life of a halachic American.