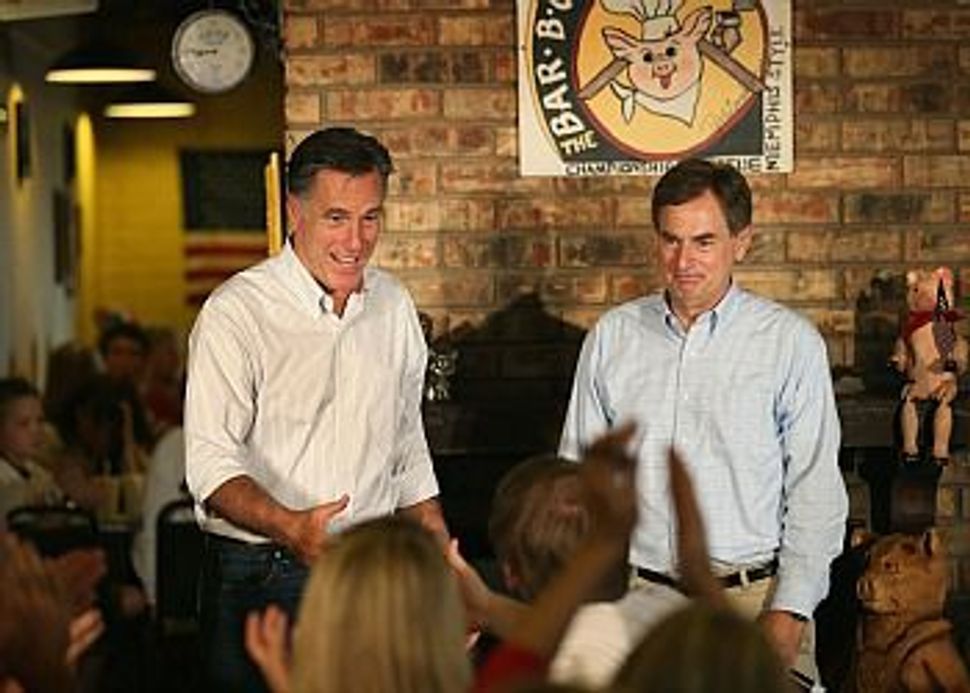 Senate candidate Richard Mourdock and Gov. Mitt Romney at an event in Indiana in August. Image by Getty Images

During the High Holidays, I wrote about the escalating number of politicians saying insulting things to women and then offering false apologies.

But in the two months or so since then, the phenomenon hasn’t faded — in fact, it’s worsened. First, State Rep. Roger Rivard said some girls “rape so easy.” Then, Illinois Rep. Joe Walsh denied the reality of life-saving abortions.

This week was the mother of them all. Meet Illinois Senate Candidate Richard Mourdock:

Mourdock, who’s been locked in a tight race with Democratic challenger Rep. Joe Donnelly, was asked during the final minutes of a debate whether abortion should be allowed in cases of rape or incest.

“I struggled with it myself for a long time, but I came to realize that life is that gift from God. And, I think, even when life begins in that horrible situation of rape, that it is something that God intended to happened,” Mourdock said.

His comments shocked the punditry, and the Obama campaign was quick to point out Romney’s endorsement of the candidate and tie them to each other. Numerous progressive sites sent out petitions and messages urging the GOP to drop its endorsement of Mourdock. Everyone was in a tizzy, which made sense except for the fact that they really shouldn’t have been, because this heinous thinking isn’t new. The “children conceived in rape are a gift from God” idea is a point of view that has been expressed by Rick Santorum, Mike Huckabee, and other outspoken voices of today’s social conservative movement.

So in many ways, this spate of foot-in-mouth moments culminating in Mourdock-gate is simply the hardcore anti-choice faction of the GOP, now empowered with political office thanks to the Tea Party, letting its freak flag fly. But it also reflects something else on our own side. As my friend Sarah Jaffe tweeted this morning:

Personally, it disturbs me that our fights over abortion have come down to whether someone deserves one if they’ve been raped.

Yes, the anti-choice movement appears to have lost the small pretense of caring for women they used to have. Yes, they’ve revealed their belief that ladies are walking vessels for God’s plans without any right to determination over their bodies.

But we have to acknowledge that the shift in the debate is also a consequence of the progressive framing of the issue, in which we seek to usually present the only most “innocent” women as abortion-seekers — rape victims, women with lives in danger or severe fetal abnormalities. These cases should certainly be mentioned when they’re relevant, but to think we can win only on that territory is to underestimate our opponents. If we move to discussing rape victims, they will move with us and start slamming rape victims — as they have done recently. If we move to women whose lives are threatened by pregnancies, or who have cancer, the anti-abortion movement won’t back down; they’ll make like Joe Walsh and deny these cases exist. And just as many have tried to redefine or fudge the notion of rape, there are actually people out there right now trying to soften the incest exceptions to abortion bans by classifying incest into “consensual’ and “non-consensual” categories.

So where does that leave the woman whose birth control failed, or who is in an emotionally abusive relationship, or who can’t afford a third child, or who simply made a mistake and wants to wait until she’s ready to have a kid? She’s not even part of the discussion.

Since the anti-abortion movement has begun to make it clear that they have very little sympathy for women, regardless of the circumstances, let me double down on mine: The decision about an abortion is up to one person — the woman considering it. Period. It’s useful to know why some women get abortions, but we have to be careful to avoid separating women into “worthy” and “unworthy” categories of abortion-seekers, because to our opposition, there are no worthy women.

One reason that this anti-Romney PSA by wonderful (Jewish) singer-songwriter Lesley Gore is so effective, I think, is it moves away from the “perfect victim” framing and presents the issue as one that affects all of us, regardless of what kind of woman we are: