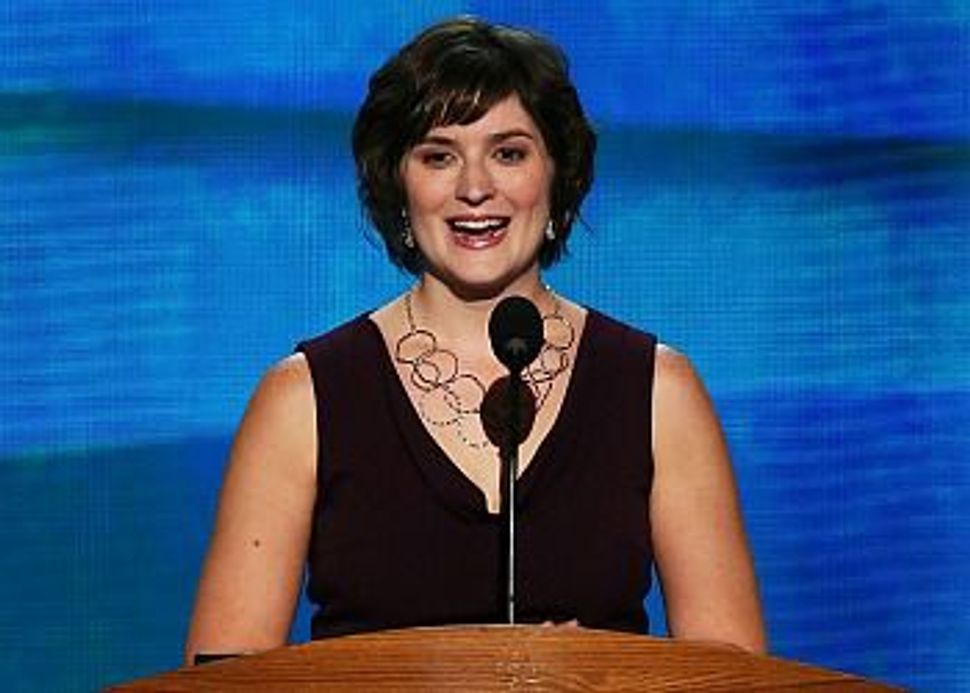 Sandra Fluke speaking at the DNC Image by Getty Images

This is the fifth post in a Sisterhood series on women, apologizing and Yom Kippur.

As we get closer to Yom Kippur and muse on atonement — what it means, what we should atone for — it’s worth probing the gendered nature of apologies. To begin with, it seems obvious that women in our society are conditioned from an early age to apologize too much and for the wrong sins.

I’m a strong feminist and I’m as hyper-aware of these dynamics as anyone. But I’ve got my share of neuroses, and so I still get told by my loved ones to “knock it off with the sorrys.” I tend to proffer “I’m sorry” as a buffer when I’m asserting needs or desires that may inconvenience those around me.

So yes, women — or really anyone adversely affected by gender roles in that particular way — need to resolve during the holidays to apologize less. We don’t want to dilute the value of apologies; we ought save them for when we truly mean the mea culpas, like when we’ve completely screwed up as opposed to when we’re, you know, expressing our opinion, asking for a favor or infringing on someone else’s time.

On the other end of the spectrum, there are the apologies we receive. As someone who writes about political culture, I’ve spent much of the year analyzing the apologies offered to various women who have been insulted at record levels in recent months. Indeed, it was a banner year for misogynist comments followed by non-apologies. And those apologies, often phrased as “I’m sorry if you were offended” or “I’m sorry for what I said, but not what it meant,” get used quite a bit when the initial comment or action offended women.

This is just the kind of apology used by Rush Limbaugh this year when he sort-of said sorry for calling Sandra Fluke a slut (“My choice of words was not the best”), the apology used by Todd Akin for his now-infamous legitimate rape comment (“I used the wrong words in the wrong way”), even the initial declaration from Susan G. Komen’s top brass that the organization’s defunding of Planned Parenthood had been “mischaracterized” by outraged women across the country.

This is a classic political non-apology prototype. But very possibly, if we’re honest, it’s not used in the political realm alone. It’s also the kind of gendered apology those of us prone to being labeled “hysterical,” “emotional” and “irrational” by social norms often receive in our personal and professional lives too — I’m sorry if you were offended, the implication always is, but a tougher, more rational actor wouldn’t have been. The genius of this sort of pseudo-sorry is that it backs its object into a corner, making it close to impossible to offer a rejoinder. Still, it’s crucial that we do: “Thanks,” we ought to say. “But that’s not a real apology.”

So as the weather turns crisp and we get ready to fast and recite our sins out loud, a worthy feminist goal for 5773 is to apologize sincerely and only when we mean it — and also demand the same sincerity and honesty of those who apologize to us.