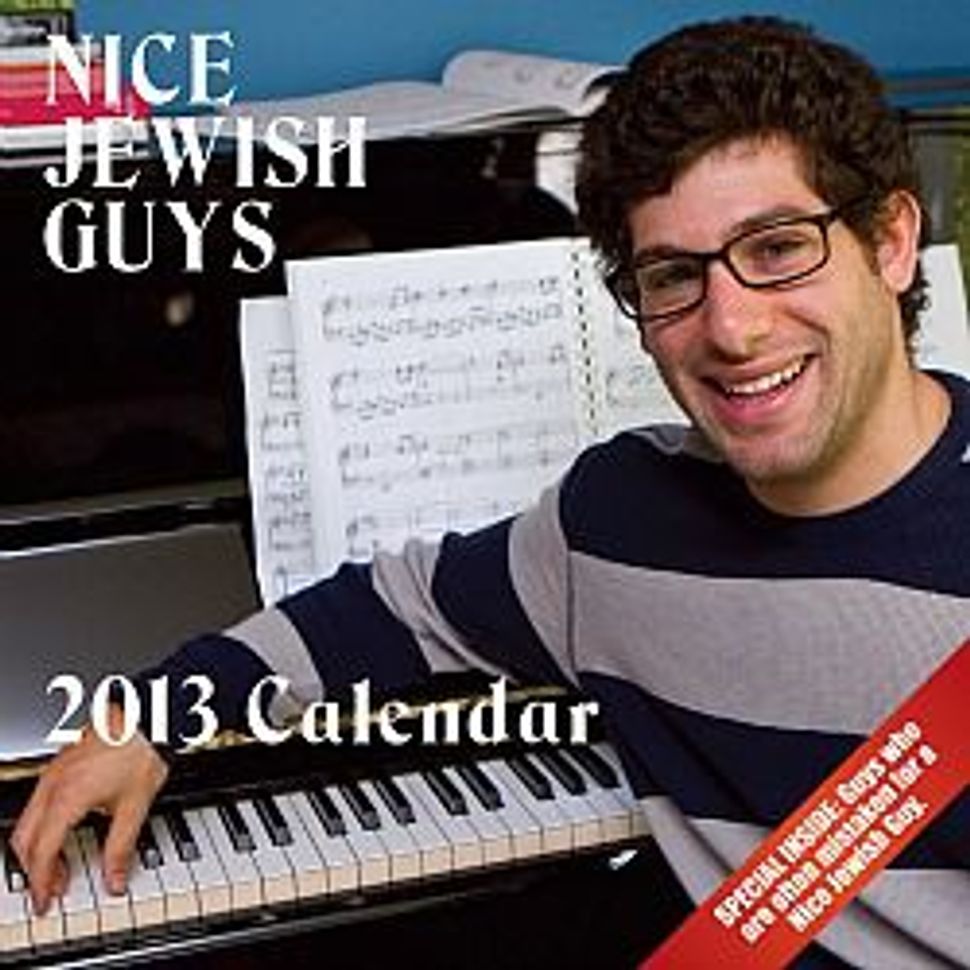 I know, readers, I don’t like anything: heteronormativity, fat shaming, traditional gender roles, the patriarchy, the list goes on and on. I’m impossible. And now, I’m really going to upset you, because here’s another thing I don’t like: the 2013 Nice Jewish Guys Calendar (Incidentally, it was tagged under “weird news” on the Huffington Post.)

The calendar is, as you might guess, a pictorial selection of Jewish (single!) men who have “ good jobs, can do your taxes, and know how to spread a nice schmear.” It took me a while to drill down to exactly what was bothering me so much about the calendar. At first glance, it might even seem like progress. See? Men can be objectified, too! As the Huffington Post writes, it’s a “buffet of 12 average looking guys who would make momma proud.” Equality has been achieved! But obviously that’s not how it works. The point is that nobody should get objectified, not that everyone does.

Since we all know feminists are humorless shrews, I’m also going to mention the fact that this whole operation is hinging on a hacky, lazy, insidious stereotype (apparently, all those things can exist at the same time): the rich, boring, nerdy Jewish guy. Can we please at least feign like we’re interested in reimagining Jewish masculinity? Surely there must be a middle ground between macho men, violence-obsessed guys, and the traditionally emasculated neb.

When I sent the link to the calendar to my feminist brain trust, they agreed that it was problematic, but in a subtle way, which just made it more annoying. As Adam Cohen, the calendar creator, told the Huffington Post about the impetus for the project: “What happened was that I realized I was now carrying the torch for all the nice guys who get passed up in the bar, are still good to their moms, and are a good catch, but the women just don’t know it yet.” Translation, according to a friend of mine: “Look at all the nice boys who aren’t married! Ladies, you’re just too picky.”

Women: We are so many things – too picky, too greedy, too entitled. We want everything: access to affordable birth control, sex, equal pay. We want to be able to have kid(s) and an identity that’s not entirely wrapped up in our kids. We also want the right to not have kids at all, to not get raped or sexually harassed on the street (or anywhere else), to decide our own fate and be our whole, real selves, and more. It’s really outrageous, how we expect safety and autonomy and to be treated like full humans.

And of course, according to the creators, the calendar “will make a great birthday or holiday gift for one of your perpetually single friends.” There are a lot of horrifying gifts to be given to unmarried folks, particularly to women, and while I’d love it if we didn’t buy each other gifts at all, here are some other things you might consider giving (if you must):

• Universal healthcare, not based on relationship status or employment*
• Gift certificate to a local sex shop (just because we’re single doesn’t mean we don’t have sex)*
• Certificate for a “friend date”– museum, book talk, ice skating, dinner etc.*
• This pie chart by Ann Friedman, about OK Cupid feelings
• This Facebook status, on revolutionizing how we treat single people on social media
• This book: “Outdated: Why Dating is Ruining Your Life”
• And this t-shirt