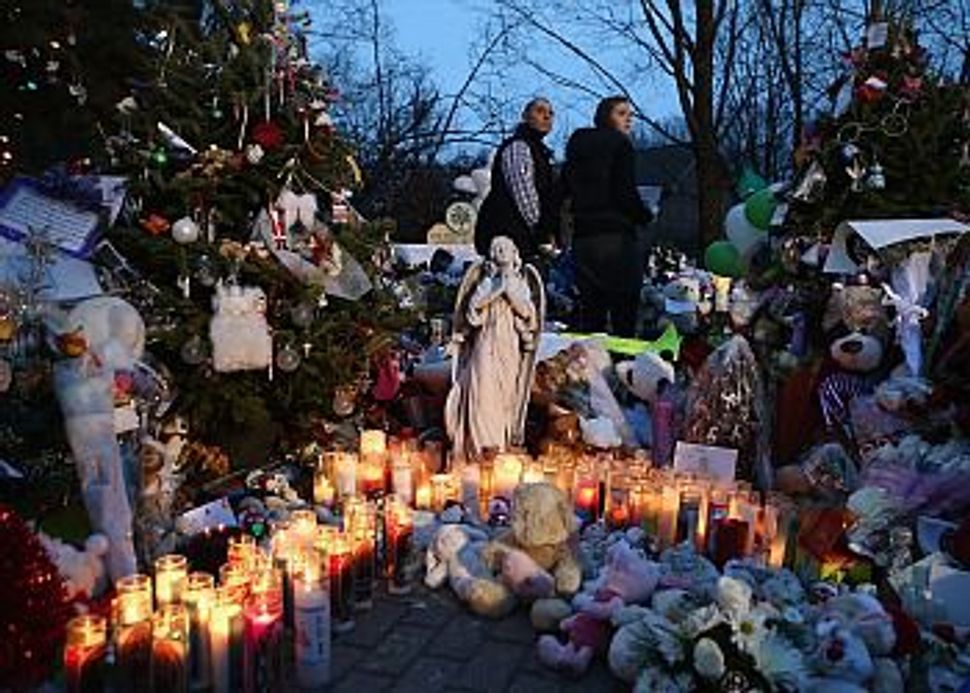 While 26 people were being massacred at an elementary school in Newtown, I was 50 miles away in Hartford, talking on the radio about the eccentricities of Connecticut. Town nicknames, historical tidbits, “Nutmeggers” vs. “Connecticutians,” that sort of thing. The show was over at 10:00 am ET; I have no idea when the first fragmentary reports made it onto the air.

On my way home, I stopped briefly to talk to my mom on the phone. “There was a shooting at a school in Newtown,” she told me. “Sandy Hook.” Though I write about Connecticut frequently, my awareness of Newtown was primarily geographical. I knew it was an hour and a half from where I live and 40 minutes from where I grew up — New England countryside meets New York suburbia. “Like, a real shooting?” I asked.

I kept driving, checking Twitter updates at every stoplight, and the news slowly spun out like a spool of evil thread, and with the rest of the state I abandoned what I had planned to do that day and sat, numb, switching between channels live-streaming the horror, watching as the world watched us.

Connecticut spent that day, and the following days, in a sort of collective daze. (I am not sure we’re out of it yet; the flags have been raised to full staff and they look out of place there.) But my focus on my home state was interrupted and complicated from the beginning by nagging Jewish thoughts.

That’s it, I declared to myself. My children are going to Jewish day school. At least Jews understand security. I searched distractedly and found a story online about a Jewish school with one guard that was now considering employing a second. I thought that would be comforting. I then remembered that I don’t have children.

In Sandy Hook, the memorials began accumulating like snowfall, with donated Christmas trees and angels in sets of 26. (Not 28. Everyone left off the shooter, of course, and his mother, murdered with her own guns. Maybe she was partly at fault, or maybe, in New England, we haven’t eliminated our need for witches.) The Christmas trees had been brought from far away; the angels were made by hand. But they’re Christian symbols, I thought, appropriate for 25 of the school’s victims, but not for the youngest. Maybe I was being ungrateful by proxy. Certainly little Noah Pozner’s family had more to be distraught over than kind gestures of the wrong denomination.

I went to my parents’ house to watch their TV. It seemed impossible, un-American even, to view a nearby mass-shooting media circus on a little laptop. On the screen there was much talk of how to tell children about death and danger. This is easier for Jews, I thought, as therapists pontificated about God needing new angels. Our holidays, our history, it’s all about people wanting to kill us anyway.

Long before the NRA’s repulsive leader inaccurately dragged Israel into the mix, I was thinking about Israeli security. But I was loathe to mention it to anyone, because it seemed most of my fellow Nutmeggers or Connecticutians or whatever we were found the concept distasteful. There was no room for Jewish pragmatism, no time for explanations of how protecting buildings and people technically works in a country with strict gun (and ammunition) laws, and ever-present security. My state, with its long and bloody history that I’d spent so much time researching, suddenly struck me as depressingly naïve.

I continued observing the aftermath as a Connecticut resident, yet the Jewish connections were unrelenting. Iranian state media quoted an Arizona politician who claimed “Israeli death squads” were responsible for the Newtown shootings. Jewish journalists debated whether coverage of the Pozner family was exploitative or simply natural. My instant reaction on reading of the first Sandy Hook-related legal action was that attorney Irv Pinsky was not doing us any favors in attaching his name to it.

There may be nothing more to all of this than the age-old dilemma of immigrants and minorities everywhere. Through which lens do you view your life, your surroundings, when you exist simultaneously in two worlds?

“You know someone’s trying to sue the state. One of the six year olds.” I told my mom. She said, “I hope it’s not a Jewish family.”