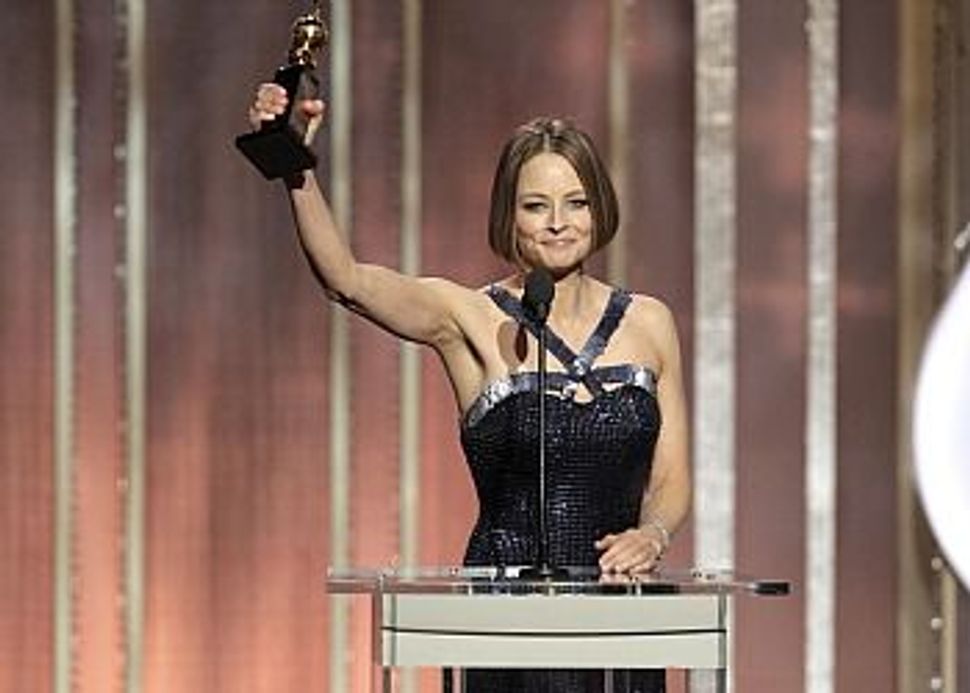 Out of Closet: Actress Jodie Foster receives the Cecil B. Demille Award at the 70th Annual Golden Globe Awards Image by Getty Images

Jodie Foster’s speech at The Golden Globe Awards Sunday night was rambling, provocative and prompted strong reactions. She seemed to come out as a lesbian, upending one of Hollywood’s oldest open secrets. And she made an ardent, funny case for respecting her privacy. Some people loved it. Others did not. Based on my Twitter and Facebook feeds, lots of folks struggled to follow what she was trying to convey. But I found Foster utterly comprehensible. And the justification of her desire for privacy, for her right to keep private whatever part of her personal life she wishes, reminded me a great deal of Debbie Friedman.

Debbie died two years ago, on January 9, 2011, when she was 59 years old. Her second yartzeit, which fell this week, will be honored with a singalong tribute on January 24 at the Reform movement’s Hebrew Union College, which posthumously named its cantorial school for Debbie.

When Debbie died, and even before she had been buried, gay activist David Levy made public a part of Debbie’s life that she had neither advertised nor hid: That she was a lesbian. Anyone close with Debbie knew she was gay. Levy’s decision to invade her privacy offended me, as I wrote at that terribly painful time.

I would love to have been able to chew over with Debbie what Foster said at the award show. I think she would have related strongly to it.

In the middle of her speech Foster said, after her audio transmission went mysteriously dead for seven seconds:

I already did my coming out about a thousand years ago back in the Stone Age, in those very quaint days when a fragile young girl would open up to trusted friends and family and co-workers and then gradually, proudly to everyone who knew her, to everyone she actually met. But now I’m told, apparently that every celebrity is expected to honor the details of their private life with a press conference, a fragrance and a prime-time reality show.

You know, you guys might be surprised, but I am not Honey Boo Boo Child. No, I’m sorry, that’s just not me.

But seriously, if you had been a public figure from the time that you were a toddler, if you’d had to fight for a life that felt real and honest and normal against all odds, then maybe you too might value privacy above all else. Privacy. Some day, in the future, people will look back and remember how beautiful it once was.

I have given everything up there from the time that I was 3 years old. That’s reality-show enough, don’t you think?

Debbie was extremely private and modest, and not just about her sexual orientation. She struggled with chronic illness for many years but wouldn’t talk about it except with those to whom she was closest. When sitting and talking in her West End Avenue apartment, before she moved to California not long before she died, a couple of times I asked her why she kept the reality of these aspects of her life so close to the vest. And she said the same thing each time: “Hamevein Yavein,” which is Hebrew for, “those who understand will understand.”

The website Jewish English Lexicon says about the idiom, it is “used extensively by the Ramban in his commentaries when there is a mystical explanation for the subject under discussion and he either doesn’t want to explain it for some reason or he really can’t because of the complexity of the idea. In such a case it [is] not used in order to be intentionally vague but rather to signal that there is more to know about this.”

That was Debbie in a nutshell. Her music is brilliant because it is simple and easy to learn. But for all its simplicity it accesses something deep, and mysterious, and spiritual. Debbie was humble, even as she was also complicated and deep and mysterious and spiritual.

I think that for Debbie, as for Foster, privacy ought to have been respected. Not because there is anything negative or that should be hidden about being gay. But because Debbie, and Foster, and all of us, are entitled to be as inconsistent, as complicated and as selective as we wish about who we share the most intimate parts of ourselves.

In a time of round-the-clock ugly reality programming, this right is valued far too little.