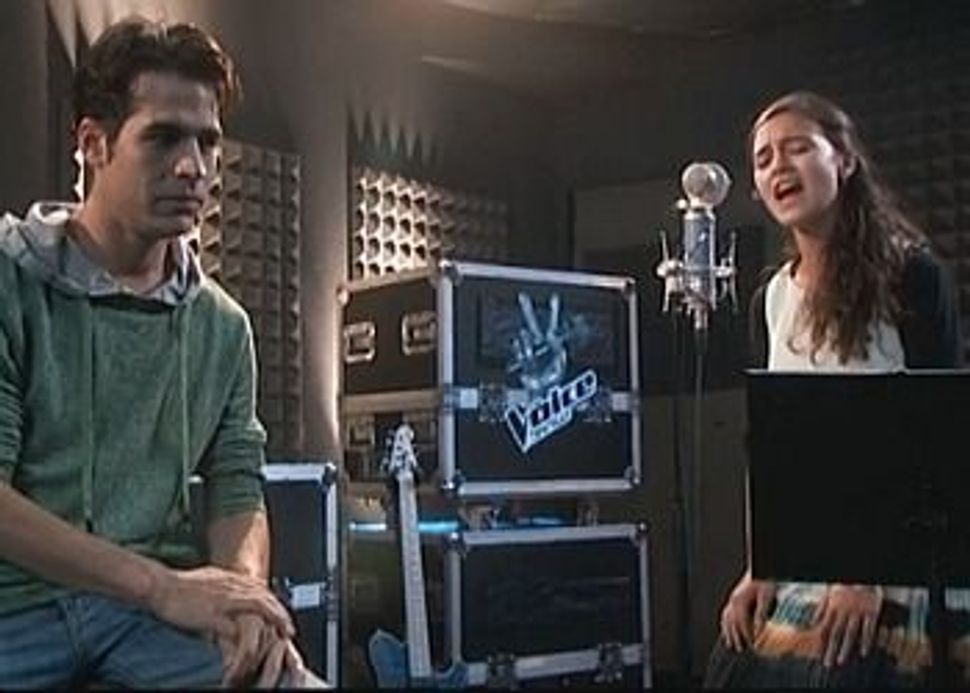 Ophir Ben-Shetreet sings for her coach on ?The Voice,? Aviv Geffen

By now, readers of The Sisterhood are aware that 17-year-old Israeli singer Ophir Ben-Shetreet was suspended from her religious girls’ high school for appearing on Israel’s “The Voice,” a televised talent competition. The suspension was a punishment for defying the halakhic injunction of “kol (b’)isha,” which prohibits a woman’s singing voice from being heard by men. It was also meant to serve as a warning to other students who might have been thinking of following Ophir’s example.

As might be expected, the story has been covered in the Israeli press. Among those offering their opinions on the matter is Rachel Azaria, the religiously observant Jerusalem councilwoman and leader of the Yerushalmim political party. Azaria has been profiled several times in The Sisterhood, particularly in regard to her leading efforts to fight against discrimination against women, and for a diverse and pluralistic future for Jerusalem and Israel.

After reading a popular column she wrote on Tuesday about her take on the Ben-Shetreet story, we asked her what she thinks is really behind the suspension, the rightward shift of religious public schools, and what devoutly secular rock star Aviv Geffen’s mentoring of the religious teen singer might mean for Israel’s future.

THE SISTERHOOD: You are an incredibly busy politician and mother. What prompted you to take time out of your packed schedule to write an opinion piece on Ophir Ben-Shetreet’s competing on “The Voice”?

RACHEL AZARIA: I wrote it because I used to sing, just like Ophir. For me, music is the road not taken. I immediately saw myself in her.… I and my friends from the religious Zionist schools and youth groups used to wear dresses like the one she wore on TV; we wore our hair in a braid like she did. She just seemed so familiar to me, like who I was at 17.

What is your response to those who say that the school was justified in suspending Ophir, since she knew ahead of time what its religious rules were?

Those who are saying this are missing the point. Maybe the school had the right to punish her, and maybe it didn’t. Who cares? We need to look at the bigger picture. Something wonderful is happening here with her singing on the show. Look at how much good is coming out of her presenting herself with charm and grace and talking about her love for traditional Judaism… Shouldn’t we be proud of and celebrating — not punishing — her?

What do you think is really behind the suspension?

People want ulpana [religious public girls’ high school] girls not to be out there. They want them to be segregated and to stay within their own tribe, so to speak. Someone who wants to cross boundaries and share and collaborate with another tribe can be considered a threat. People get scared and punish this person to try to bring things back to the way they were.

Ophir is crossing boundaries and trying to be part of something larger, more pluralistic and collaborative. Young people like her don’t want to live with these fences anymore.

Are religious schools putting pressure on students and their families to be more observant?

Definitely. There has been a rightward shift. I wrote in my piece about how when I was in ulpana, I sang in front and with boys all the time. Ophir has said that in her family it was never considered a sin to sing in front of men.

This strictness is an issue we are dealing with in other aspects, not just the singing. Kids are coming home from school and questioning their parents’ level of observance. How do you raise children when they are getting two different messages — one from home and one from school?

You wrote that music is perfect medium for bringing Jews of different streams together. Do you think that the arts in general can be a means to that end?

Definitely. Nowadays, there is so much art all along the secular-religious spectrum. But I think that the possibility with music is the strongest, simply because there is so much to work with. With music, it’s just happening all over the place, like with popular musicians such as Kobi Oz singing traditional piyutim (liturgical poems).

What do you think of Ophir’s choosing Aviv Geffen as her mentor on “The Voice?”

In my day, it would have been unthinkable for a religious girl to choose Aviv Geffen as her mentor. I couldn’t have even imagined speaking to him. He was the antithesis of everything we identified with. But, as I said, Ophir is part of this new generation that wants to celebrate one another, and that gives me reason for optimism.

If you were able to go to the studio to meet Ophir and Aviv, what would you say to them?

To Aviv, I’d say: We are looking forward to seeing what will happen, where you are going with this collaboration.

To Ophir, I’d say: Continue what you are doing. We are very proud of you. We see the hope for a better future for Israel when we see and hear you singing on “The Voice.”

Watch Ophir sing for her coach, Aviv Geffen, on Israel’s “The Voice.”