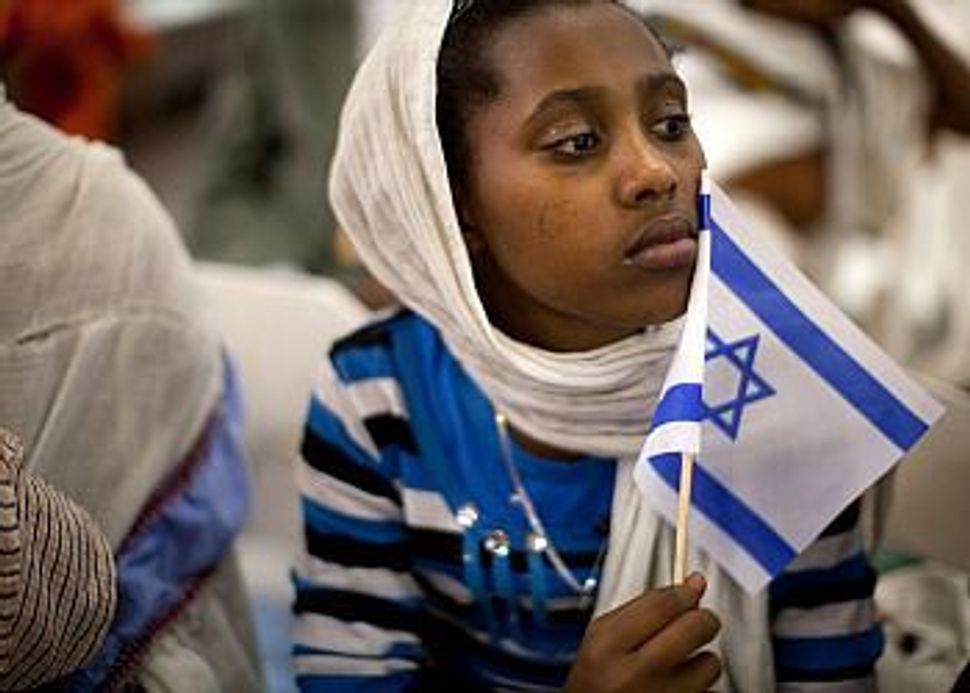 A new Jewish immigrant during a welcoming ceremony after arriving in Israel on a flight from Ethiopia. Image by Getty Images

The news from Israel that Ethiopian Jewish women were given birth control shots without their consent has attracted quite a storm of argument, disillusionment and shock — as has the news of the huge number of extra-legal “black market” abortions, both addressed recently at the Sisterhood.

I don’t pretend to be an expert on the fine points of Israeli public health policy; I only read what crosses my path stateside. But I do think a lot — maybe too much — about notions of reproductive choice, freedom and justice. And I see evidence that not all women who want terminations in Israel are getting them legally. Meanwhile, the state’s restrictions on the procedure are putting them in danger. At the same time, women of color in Israel have been coerced or misled into taking birth control shots. To me, these stories together exemplify how arguments over reproductive issues are oversimplified by our pro-choice/pro-life political tug of war here in the United States.

The fact is, the womb, the place from which life emerges, is a source of power. It will always tempt those who want power, and governments have and will frequently attempt to control women’s bodies and fertility — to take charge of ”the means of reproduction,” to use a spin on a Marxist phrase and the title of an excellent book on the subject.

In America, white women are encouraged not to terminate or prevent pregnancies, while women of color have historically been forcibly sterilized and mothers of color remain stigmatized as “welfare queens” or inadequate moms. As Melissa Harris-Perry wrote during the onslaught of abortion restrictions in 2011, the conservative vision for America is a racialized one:

For white women in particular, this would mean a retreat to the home, where they would be encouraged to bear more children so as to reclaim the racial character of the nation. Immigrant women, however, would be discouraged from having children.

America is not Israel, but this paradigm sounds eerily familiar to the news out of Israel this month.

The need to be vigilant against attacks on all valid reproductive choices, not just some, explains why women of color in the U.S. — alienated from an abortion-focused feminist agenda — coined the term “Reproductive Justice.” The achievement of such justice would encompass prenatal care and judgment-free births, universal childcare and abortion, contraception for teens and support for teen mothers, economic justice, care for queer families and transgender individuals, and an end to violence against women, from their partners and imposed by the State.

The justice framework acknowledges the Ethiopian Israeli woman who received an unwanted shot as well as the Ashkenazi Israeli woman who can’t terminate an unwanted pregnancy as both existing on a continuum of injustice — but with experiences that differ due to race, class and social hierarchy. And yet its principles assert that they both must have a right to the same fundamental bodily autonomy. I keep thinking of the old pro-choice slogan: “Not the church, not the state, women must decide our fate!” This goes for those who want to have children and those who don’t alike.