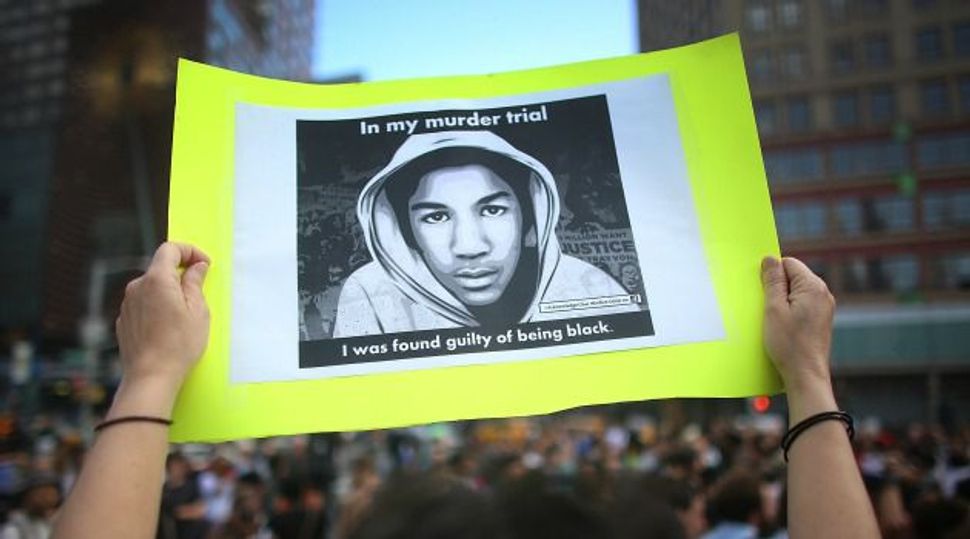 Shock. Anger. Sadness. Three emotions that I felt acutely this weekend, when a Florida jury acquitted George Zimmerman in the murder of Trayvon Martin. But those three emotions can’t begin to describe the heartache and sorrow I feel. I’ve had a heavy heart these past few days. So heavy that words seem inadequate; I haven’t been able to fully name the feelings that occupy my mind and fill my heart with a heaviness I’ve not experienced. As a black woman living in America, I’ve known since childhood that racism exists, but it seemed — at least I hoped — it was confined to the Civil Rights area or the south. This weekend and this verdict remind me that racism is not dead.

I have been thinking of my nephews, three black boys growing up in a world that, time and time again, tells them that no matter what they accomplish, no matter who they become, no matter how much love and support they receive from their family, they should — and will — be treated with suspicion. I’m thinking of my father, who is raising these boys, and how he probably didn’t expect to have to teach his grandsons the lessons that his father taught him in the 1960s: that they’ll have to be better, smarter and more educated than everyone else; that they should be aware of who they’re talking to and how they’ll be perceived; that they’ll need to watch their backs and “stay out of trouble.”

Like a lot of people, I was naïve. I thought that by electing a black man into the nation’s highest office we had, somehow, moved beyond an America that judges a person based on skin color, gender, sexual orientation, immigrant status or ability. I tricked myself into thinking that I lived in an America where the children I hope to bear will be able to walk down any street in any city and feel safe. I convinced myself that I wouldn’t be denied the same federal rights as straight citizens. I tried to believe that I lived in an America that allowed me, as a woman, to make choices about my own body. I tried to convince myself that we were moving towards a future and making changes that would fully live up to the dream of America that President Obama spoke about in his second inaugural address.

I lied to myself.

Tonight is the beginning of Tisha B’Av, a fast day I’ve never kept because it never spoke to me. The idea of the 9th of Av being the saddest day in Jewish history because of the Temple’s destruction or the expulsion of Jews from Spain — these devastations don’t speak to me as a black, Jewish woman. Instead, like I do with all Jewish holidays, this Tisha B’Av has taken a modern-day significance.