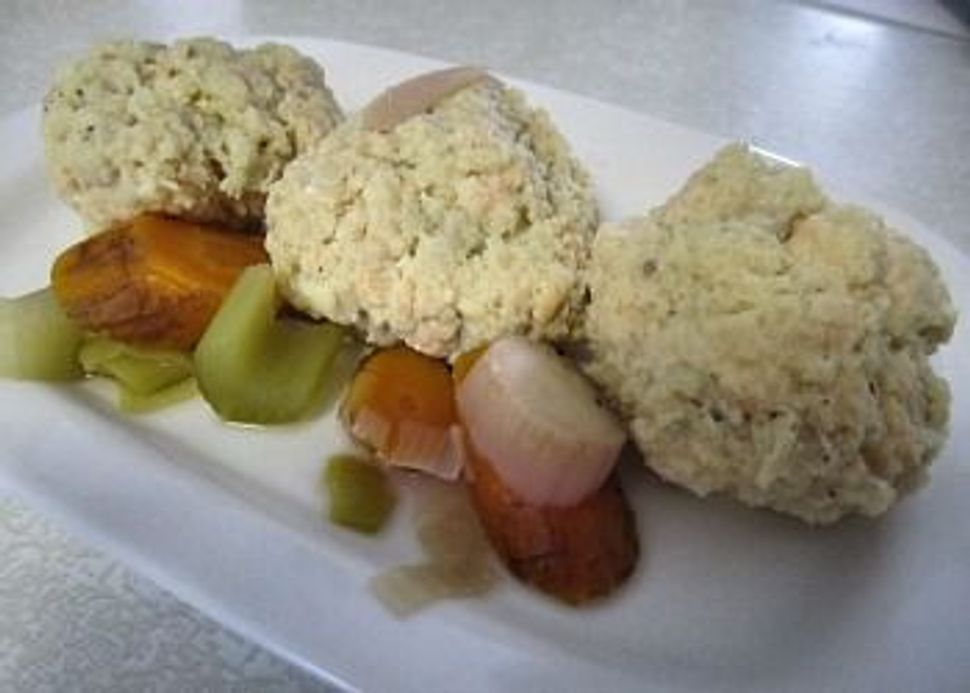 This is the second post in a series by Johnna Kaplan exploring aspects of Jewish life outside of her own experience.

I have always been wary of Gefilte fish. It’s fish, but not quite. It lurks in jars in the supermarket, looking deceptively like delicious matzoh balls, only it isn’t. I have seen it defined as “the pescatarian’s meatloaf,” which is not exactly appealing, and “poached fish dumplings,” which is even worse. But unlike schmaltz or gribenes, which I am content to leave in the past, I felt as if I should at least try to make — and like — this dish that’s practically a byword for Jewish cuisine. So I decided to make gefilte fish as part of my quest to do more Jewish activities.

There’s this little boy and he’s terrified of kreplach. Whenever his mother serves it, he looks in the bowl and screams “AAAHHH!! KREPLACH!!” So his mother decides the boy should be shown each individual element of kreplach to prove how un-scary it truly is. She rolls out the dough (“See? Just like pancakes!”) and the boy nods happily. Then she assembles the meat (“See? Just like meatballs!”) and he nods happily. Then she folds it all together (“See? Like a little hat!”) and he nods happily. He is similarly unafraid of soup. But when the entire dish is finally placed before him, he takes one look and screams “AAAHHH!! KREPLACH!!”

I delayed making my gefilte fish by reading about it first. The dish came about due to a combination of religious law and Eastern European Jewish poverty. If you couldn’t remove bones on the Sabbath and you couldn’t afford very much food, mixed fish balls were the way to go. Though the ground fish is no longer typically stuffed back into a fish skin at the end (gefilte is Yiddish for “stuffed”), the dish has been a staple ever since. In America, it was propelled into iconic status by, what else, marketing campaigns.

Eventually I realized I needed a recipe, of which there seemed to be millions. Gefilte fish has many regional varieties; Lithuanians use more pepper and Sephardim poach the fish in tomato sauce. In Poland, they put sugar in it, which sounded so awful it almost made me look forward to the unsweetened version.

I also had to admit a few truths about myself. I did not want to grind up fish bones. I did not have the patience to do anything with fish heads except avoid them. I was not going to be making any recipe that started with “7 ½ lbs whole carp.” I ended up combining several recipes in the simplest way I could. Maybe that was a cop-out (one recipe I looked at was titled something like “Gefilte fish so easy you’ll feel guilty!”) but, I figured, there would still be perfectly nice fish chopped up and reconstituted into fish balls. So essentially, I had it covered.

I made the simplest gefilte fish I could devise, with vegetable broth (sorry, fish heads) and a basic mixture without too many fancy spices or sugar, like those crazy Poles. I mixed cod, which seemed like the standard gefilte fish fish, salmon, which some recipes recommended and others seemed like they would disapprove of, and perch, which I don’t recall ever eating before.

The most engrossing part of the process was figuring out my grandmother’s two ancient (well, roughly 80-year-old) meat grinders. Purchased in Alberta, Canada, they and all their intimidating detachable parts had ended up in my mom’s kitchen in Connecticut, where I made my fish because I was not about to lug those grinders back to my kitchen. They were cast iron, and heavy. Imagining my grandmother — who was about 4’11” with soft fuzzy hair and always wore red lipstick — wielding those things, said more about immigrant Jewish life than several large books on the topic.

As I was wondering if I’d smell like fish and have the “Roly Poly Fish Heads” song stuck in my head for eternity, my mom made my dad look into the simmering pot. “I hate that.” He said, disgusted. “You hate fish?” “No, gefilte fish. It’s the worst thing ever invented, next to the atom bomb…I class that with liver.” “Your mother must have made terrible fish then,” my mom responded.

As I waited for the gefilte fish to be ready, I noticed that on the back page of my parents’ local paper was an ad for a pretentious prepared food shop’s Rosh Hashanah menu, including “traditional gefilte fish.”

Finally it seemed my pot had simmered long enough, so I tried a bite. And it was…fine. I wish I could say it was amazing and I now want to make gefilte fish once a week, or even that it was so comically terrible that I can’t believe my people put up with such a thing for so long. But honestly, it was, quite simply, fine. It was fish, it was mild, and the texture, while hardly the best texture a food could have, wasn’t extremely off-putting either. I can safely say I would not make gefilte fish again unless I knew someone who really loved and wanted it.

The one benefit I did gain, though, aside from a new appreciation of the art of hand-grinding one’s ingredients, is an opinion — however wishy-washy — on gefilte fish. Like Times Square on New Year’s Eve, gefilte fish is now a topic I am now entitled to opine on, having done it once. And Jews being a rather opinionated people, that’s not without merit.