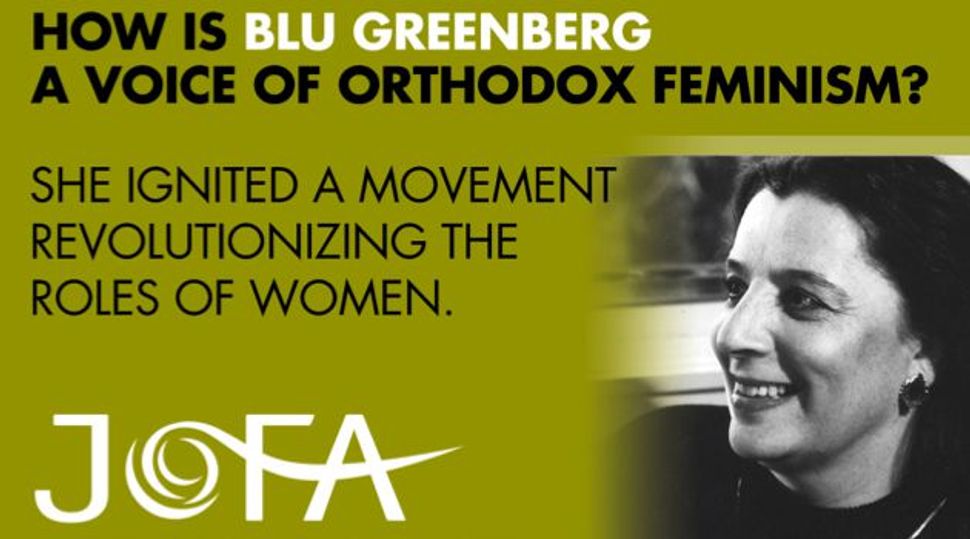 No, your eyes aren’t deceiving you. Up there amid all the sports stars, movie actors and underwear models, those are the faces of Jewish Orthodox feminists gazing down at you from a billboard in Times Square on Wednesday.

For one day only, the countenances of five individuals who have advanced the cause of Orthodox feminism will be flashed on a screen above the entrance to the W hotel on the southwest corner of 47th St. and Broadway. The Jewish Orthodox Feminist Alliance is behind the spectacle.

“JOFA is proud to be able to mark the important achievements of Orthodox feminism in this quintessentially New York way,” said JOFA executive director Elana Maryles Sztokman. “If you’ve made it to Times Square, you know that you’re doing something important.”

Timing will be key to seeing the billboard, as it will flash only once per hour at exactly 20 minutes past the hour on November 13. JOFA supporters will convene near the TKTS steps in Times Square at noon to look up at the billboard en masse and celebrate the achievements of the figures portrayed.

Six slides will be shown, each for just 10 seconds. However, that should be long enough to look at the photo and read the short description on each slide. The five Orthodox feminist leaders featured in the display are Blu Greenberg (pictured above), who ignited the Orthodox feminist movement; Dr. Anat Sharbat, who is studying to become a Maharat; Rabbi Asher Lopatin, President of Yeshivat Chovevei Torah who champions an open, values-based community for men and women; Phyllis Shapiro, who learned to be a scribe and created a Scroll of Esther; and Ophir Ben Shitrit, who defied opposition by religious authorities to sing in a televised Israeli talent competition.

“We decided to showcase people who were examples in one of two ways. Either they are known for great historic, once-in-a-lifetime achievements, like starting a movement, or they did something attainable that can serve as an example to anyone, like gaining Jewish religious skills or knowledge,” said Aaron Steinberg, JOFA’s associate director.

Not only will the talented teenage Ben Shitrit be seen on the JOFA billboard, but she will also appear on stage at the organization’s upcoming 8th international conference, to be held at John Jay College December 7-8. One thousand people from five countries on three continents are expected at the conference, titled “Voices of Change.” On the agenda will be cutting-edge issues such as men’s role in feminism, slut-shaming, single mothers by choice, LGBT issues, hair covering and new rituals.

Ben Shitrit is an example of how the torch of Jewish Orthodox feminism is being passed to a new generation. “We are proud to have her with us at the conference, and to showcase her on the billboard,” said Steinberg. “She stood up to opposition as others might not have. She has confidence in her religious practice. She is putting her voice out there and is not allowing herself to be silenced by extremism.”