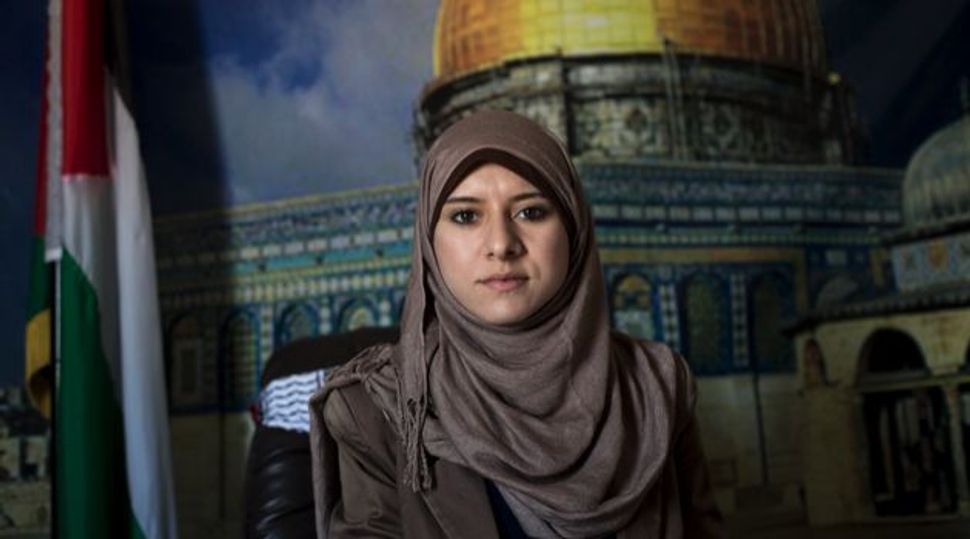 Earlier this month Hamas appointed its first female spokeswoman. The new voice of the organization is Isra Al-Modallal, a 23-year-old British-educated former journalist and divorced mother with a toddler (pictured below). She will be in charge of all communications with the international media and will focus on humanitarian issues and not suicide bombings or policy.

“I will make the issues more human, and even if [Palestinian] officials do not understand this language, I know Western people will,” she told a reporter.

Al-Modallal is already breaking with tradition, referring to Israel as “Israel” instead of the “Zionist entity’ and does not identify as a member of Hamas but rather “a Palestinian activist who loves her country.” Though she does agree with Hamas that Palestinians should control the land they see as historically theirs, which, of course, include Israel.

So why did conservative Hamas, considered a terrorist organization in the US, EU and Israel and not traditionally a fan of women’s freedoms, decide to mix up their international image with a make-up wearing, English-speaking, male hand-shaking lady?

The AP story suggests that this hire was the latest step in “a long-running push by the group to present a newer and friendlier face.” Six months ago the government media department got a new director, who has “hired younger media people, started a new official government website, began extensive use of social media and started conducting seminars and workshops.” He told the AP that his hire of Al-Modallal was an attempt “to be more open to the West.”

Writing for Time, Shikha Dalmia, senior policy analyst at Reason Foundation, a libertarian, free-market policy group, says she sees the appointment of Al-Modallal as a sign of hope for women in Gaza.

When Hamas took control of Gaza in 2007 it imposed a number of strict restrictions on women — their interpretation of sharia law. Women were required to wear a headscarf, prohibited from smoking in public, not allowed to get their hair cut by a man and shut down dressing rooms in clothing stores. There were also reports of men roaming the streets and harassing women who were out with men they were not related to. Dalmia says that while they have since backed off some, the arrival of Hamas was still “a big step back for the rights of Muslim women.”

Al-Modallal, however, might reverse that. Her years in England have tinted not only her accent, but her whole persona… She listens to non-Islamic music, wears makeup and has a comfort level with men, even shaking their hand in public (imagine that!), all things that are no-nos for Hamas purists. … She eventually plans to return to England to pursue law. In short, she has accepted her current assignment not out of any deep ideological commitment but as a career move.

Dalmia goes on to say that even if her appointment was mostly for show, it will still make it harder for Hamas to force Gaza women to live with so many restrictions while Al-Modallal gets to carry on as if she was still living in the UK. Eventually “it’ll be prodded to remake itself in the image it wants to project to the world.”

So while there appears to be little evidence that the presence of Al-Modallal will help dissolve some of the gridlock that is Middle East politics, there seems to be reason enough to believe that she will at least push Gazans to rethink the role of women in society. And then maybe, one can only hope, this open-mindedness will spill over into forging a path to peace.