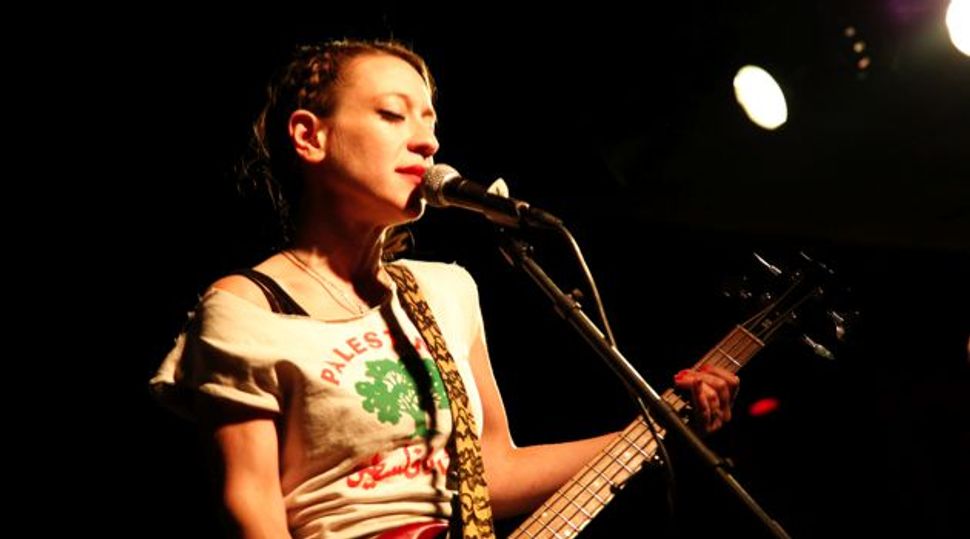 Shondes.com // Louisa Solomon of The Shondes

Louisa Solomon is the feminist lead singer of The Shondes, a punk-rock band (think “Bruce Springsteen meets Bikini Kill,” she jokes) with openly queer members. The Forward once said she had “ a talent for androgynous sass.” Although the group espouses punk’s rebellious ethos and sometimes touch on geopolitics in their lyrics, they’re not explicitly political. “Most of our songs are about the power of friendship, hope, surviving heartbreak. We aren’t terribly polemic,” Solomon told me during a Friday afternoon gchat. “We are a rock band, we try to write anthems that help people survive, and we regularly invoke Judaism!”

But before she was a punk singer, Solomon was an activist. She had visited the West Bank and spoken out about what she saw, supporting the Boycott, Divestment and Sanctions movement as a way to levy pressure to end the occupation. As a result of Solomon’s previous personal activism, the JCC of Washington, DC, revoked its sponsorship of an upcoming show by The Shondes. They did this even after Solomon offered to pledge not to bring up politics during her show. To borrow a line from SNL, really, JCC? Really?

Jewish Voice for Peace has stepped up to the plate to sponsor the show, but overall this is bad news. (I’m sure I’m not alone in re-dubbing the mess over BDS and Jewish institutions ‘BDSM.’) Instead of hearing music from a group of gender-inclusive role models, the young folks of the JCC are getting their first taste of a blacklist. Organized Jewish institutions need to loosen up it and allow intellectual and artistic expression from community members who don’t toe the line on Israel. There was Judith Butler, and Ramaz, and the formation of Open Hillel, and several other instances at the DC JCC. Forbidding people from appearances, particularly when the subjects in question are speaking on another topic, is outrageous. And it’s hypocritical too. How can you oppose the cultural boycott piece of BDS, standing for the right of global artists and thinkers to perform and talk in Israel, and then turn around and prevent Jewish artists and thinkers whose ideas you don’t like from sharing their work with their community at home?

I often don’t follow the intra-Jewish community scandal du jour because I’m too busy tearing my hair out over intra-feminist beef. But from the latter experience, I know this: a move to shut down dialogue and censor art is a coward’s move. “There’s something laughable about how afraid they are of us,” Solomon told me. What do the donors and directors at the JCC think will happen — a killer guitar chord soundbite from a BDS supporter will magically turn hordes of listeners into an army of Israel-haters who renounce their Judaism en masse? What a poor opinion they must have of young Jews if they think we can’t critically and thoughtfully engage with guests and artists.

This is exactly the kind of silliness that alienates young Jews, leading them disassociate from traditional Jewish organizations and fill out those “unaffiliated” bubbles on the Pew survey. Many of the younger folks I have recently quizzed on this issue are not thrilled with BDS itself, but hate censorship of BDS supporters. They long for an honest conversation and exchange of ideas. Which, ironically, is exactly what the Shondes shonde has encouraged. “For every two emails yelling at me, there are like 300 letters of support,” said Solomon, “coming from apolitical Shondes fans, music bloggers, Jewish progressives, Palestine activists and even committed Zionists who support our right to play music for Jews even though they would argue with us about Israel.”