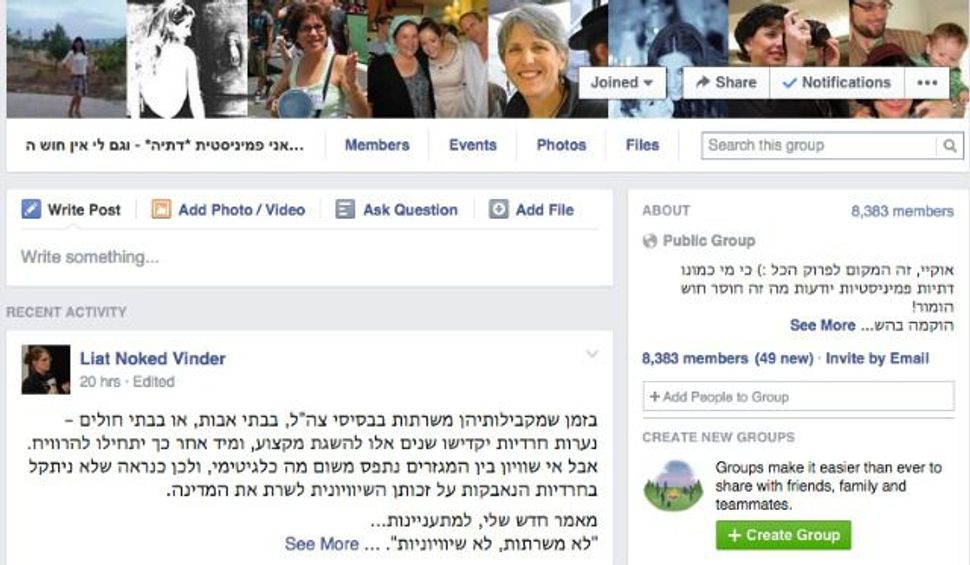 When Efrat, 36, a Modern Orthodox lawyer from Tel Aviv, recently got promoted, several male colleagues made the same comment: “Why don’t you smile anymore? Since you got promoted, you always look so serious.” Annoyed at having to deal with remarks that she felt would never have been made to a man in her position, she turned to Facebook to share her frustration and ask for suggestions for a good retort.

She is not alone.When Israeli women want to vent about sexism in their lives, especially within religious institutions, they head to a Facebook group called “I’m a “religious” feminist and I too have no sense of humor,” which has become the most popular forum for Israelis to discuss and celebrate their dual identities as Jews and feminists. With 8,389 members, the group is known for the political and religious diversity of its members (“from settlers to members of B’Tselem,” according to Michal Bergman, one of its earliest members). It includes many notable Israelis including MK Tsipi Hotovely, Deputy Mayor of Jerusalem Rachel Azaria and prominent journalists Emily Amrousi and Sara Beck, among many others.

And to think, it all started with a sexist joke.

It was a little over two years ago when Deborah Elhadad Aroshas, now 27, a religious woman from Beer-Sheva, was reading a column written by journalist Yair Lapid (who later went into politics). In his weekly column, Lapid referred to himself as feminist and wrote about how important the movement was to him. He then went on to make a joke about the fact that Israeli intelligence officials had just found classified information hidden within a pornography video. He quipped that his schedule was free that week and if needed, he would be more than willing to do his reserve duty (wink, wink). “I was bothered by the fact that he called himself a feminist and then, on the same page, made this kind of joke,” said Aroshas. It turned out that other readers agreed with her and several of them complained to Lapid. He responded by referring to them as “feminists who should get a sense of humor.”

Of course, Lapid was not the first to use this kind of terminology to describe feminists. The stereotype of the feminist as tough, unyielding and humorless has long been used to dismiss the groundbreaking notions introduced by the movement.

But, although Lapid’s comment may have been meant to deride the women, it ended up empowering them. As a result of the exchange, a woman called Tal Gutman started a Facebook group aimed primarily at secular Israeli feminists, which she called ‘I’m a feminist and I too have no sense of humor.’ Shortly afterwards, Aroshas, who had since become friends with Gutman, decided to start another group geared to religious and traditional women, “We encounter a unique kind of chauvinism related to religious practice, so I wanted to start a little forum for that,” she said.

Chuckling, as she recalls it now, Aroshas says she was expecting the entire group membership to be composed of her and two friends. But, surprisingly, it caught on, going viral and easily eclipsing its secular predecessor in popularity.

With a healthy dose of humor, group members use the forum to share all the little joys and frustrations of being a woman with feminist and religious sensibilities. Those who post must follow a few guidelines — no judging, no preaching and no questioning another person’s motives. This policy is part of what attracts members from outside the Orthodox fold, so that Conservative, Reform and secular members are active in the group and feel free to talk about their traditions. It also means that no one can claim to define feminism. An Orthodox woman who covers her hair has just as much right to claim that title as a secular peer.

According to group member Rabbi Alona Lisita, who is affiliated with the Reform movement and teaches at Hebrew Union College, some of the group’s early posts on topics related to prayer groups and other forms of religious practice led to harsh arguments among members. “Many Orthodox participants came with the presupposition that the only way to be religious was their way, while liberal Jews saw the Orthodox as backwards, submissive, and under male control,” she explained. But that discord soon shifted into the current vibe of respect. “Now, it happens all the time in the group that people say to each other ‘I disagree completely but I respect your right to do that.’ As a kehilla, we’ve created a tolerant group. It is so precious and we lack it in our society.”

Subjects dealt with on the forum are timely and often speak to themes relevant around the world, as well as locally. For example, last week one poster started a brainstorming session for creating a feminist “beit midrash,” another discussed the backlash against haredi women who want representation in the Knesset; while a third woman shared a touching story of her niece who asked her how she “dares” to do ‘boy’ things like roughhousing and wearing button-down shirts. Other participants requested suggestions for feminist nurseries and the names of lawyers to help advocate for a battered woman friend. Two major themes that generated heavy response were agunah advocate Batya Kahane-Dror’s decision to step out of the Knesset race and a sign appearing on busses in Jerusalem proclaiming ‘Short Clothes = Short Lives.’

“The group makes you feel you are not alone, that there are other people going through the same struggles. You might be the only woman in your yishuv [town] that relates to feminist ideas. But you can go online and get support,” explained Bergman.

Some of that support comes down to sharing tips for more women’s involvement in weddings, brit milahs and bat mitzvahs. Holidays have become an occasion to compare notes too. Simchat Torah tends to spur a flurry of posts by members reporting forays into new religious experience — an aliya in an egalitarian or women’s minyan, for some; or the first time they have touched or danced with a Torah, for others.

But the group has also become the site of painful discussions. Participants have busted a few myths by reporting — sometimes anonymously — about sexual assault and incest in the Orthodox community. Such discussions have set the stage for a new grassroots campaign to teach people how best to report these kinds of violations, and how to create room for discussing them in communities where intimate matters are addressed with attention to modesty. Jewishly committed LGBT group members have also found a mostly supportive network within the group and a number of posts deal with questions of tolerance for the religious gay community. Additionally, the group includes a growing number of religious men who identify with the cause of feminism and often add their unique perspectives to the mix. So, is anything taboo? Not really, the group includes a little of everything, although the occasional discussion about sexual pleasure is not everyone’s idea of appropriate or modest. Those who don’t feel comfortable are always free to leave the group.

According to those in the know, in the last year, the forum has shifted from more of a fringe group to the “in” thing among enlightened traditional and religious types. “It has become mainstream. If you see yourself as cool and intelligent, then you have to be part of this group. If you aren’t, then you’re kind of primitive,” said Oshri Shlomowitz, a lawyer in her thirties from Jerusalem.

But with all the revolutionary aspects of the Facebook group, most members are most excited about the warm friendships they’ve formed and the fact that they no longer feel alone.

Aroshas explained its special role. “This virtual community has given women courage. Often they will post comments saying: ‘I was intimidated at first, but I had the strength to speak up to a rabbi, or to my father, because I knew I could come here and talk about it afterwards.’ With a lot of humor and positivity, this group is helping women find their voices.”