A Nazi Refugee Transforms Her Trauma Through Art 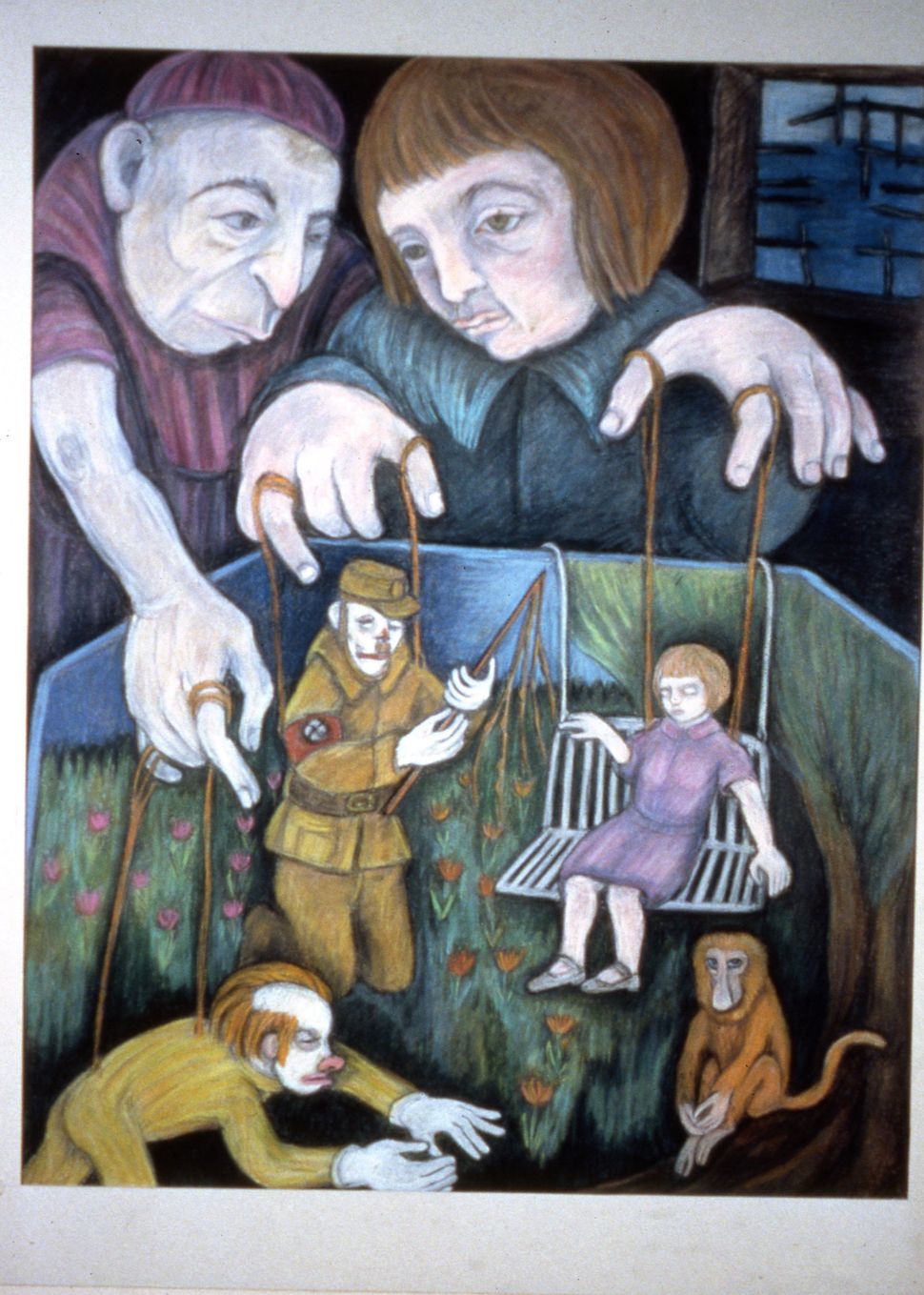 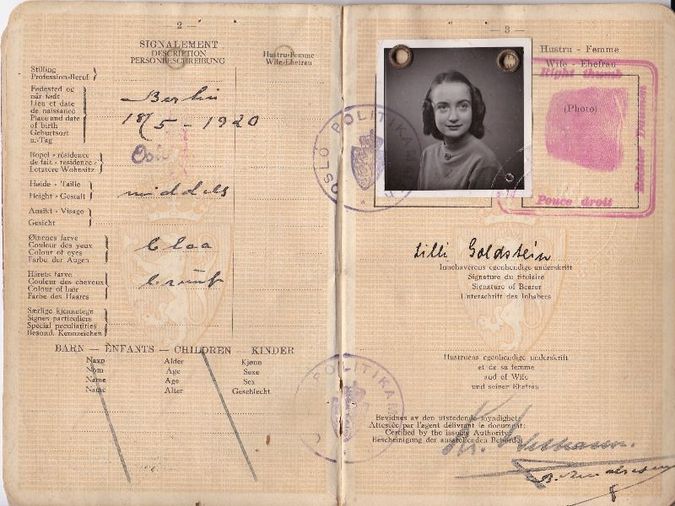 After Swiss psychiatrist and psychologist Carl Jung died in 1961, his family kept a manuscript of his “Red Book,” a dream journal which he said recorded his “confrontation with the unconscious” and which the New York Times would later call “the Holy Grail of the unconscious,” locked away in a bank vault. Family members were “afraid of the damage that the work might cause his professional persona,” says Patricia Llosa, a Jungian psychoanalyst in New York. The book remained under lock and key for nearly 50 years until, in 2009, it was published.

Attending the at the Metropolitan Museum of Art for 21 years, made a connection at one of the panels over which she presided. Struck by the similarities between Jung’s book and a series by his late wife, the artist Lilli Gettinger, Karl Hochschwender approached Llosa and asked her to help educate the public about Gettinger’s work.

“I was excited to discover a cache of chronological images by a German, Jewish, female artist unlike any I’d encountered prior, save perhaps the sole precedent of Charlotte Salomon, whose work is stylistically worlds apart from Gettinger’s,” says Llosa, who curated “Psyche, Symbol, and Trauma: The Art of Lilli Gettinger (1920-1999).” The exhibit will be on view until July 12 at the Center for Modern Psychoanalytic Studies in New York. 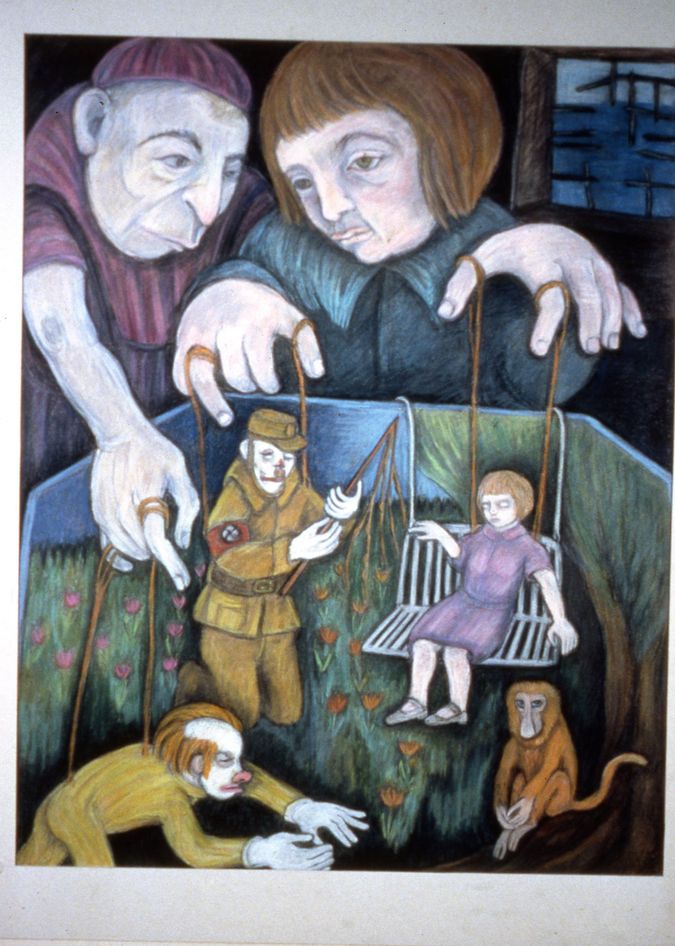 Although Gettinger taught sculpture at New York’s Museum of Modern Art from 1956 to 1971, she rarely exhibited her work after a solo Corcoran Gallery exhibit in Washington (1952), which, according to the the CMPS website, was “subject to scathing criticism (ironically) from the Daughters of the American Revolution, who called it ‘pornographic.’” Gettinger fled the Nazis in 1938 by forging travel documents, and passing from Switzerland to Norway to several Caribbean islands en route to New York, where she arrived in 1941.

“Gettinger was a complicated person: one who both defied her parents hanging out with her boyfriend leader of the radical Zionist youth movement Beitar (before he was subsequently hung by the Nazis) and later worked to acquire wartime remunerations for her parents from the government,” Llosa says. “She was a woman who, despite a strong Jewish identity, chose to marry a non-Jewish German expat. She is woman who decided to immerse herself in making art at a time when world war was raging.” She also drove herself into a tree and decided to begin a pastel series upon the recommendation of her therapist.

The CMPS exhibit of Gettinger’s work, according to Llosa, is very timely.

“We live in a time when art is increasingly treated as commodity. Shares in collections are sold as portfolios. Experts take turns forecasting sales at auction. Dealers and collectors flip work. As fine art achieves the illusion of a predictable and controllable market, the allure of the outsider and the unpredictable artist grows,” Llosa says.

Although Gettinger was classically trained, the artist chose to adopt tools and methods of outsider artists, and in so doing, she defied classification as either a fine artist or an outsider artist, according to Llosa. She was also the “archetypal refugee.”

“Gettinger’s journey as refugee and the lessons her art imparts as she uses it to try to reconcile her multiple identities are as invaluable as ever,” Llosa says.

As a psychoanalyst, the curator sees particular meaning in Gettinger’s efforts to create new images and metaphors by unleashing her imagination. “These are crucial to Jungian psychoanalysis, because it is these symbols that mysteriously unite disparities that were previously irreconcilable,” she says. “The emergence of symbols are the pathway to healing inner conflict.”

In Gettinger’s sculpture “Hegira,” Llosa sees a “living symbol,” which alludes to a toy cat figure which the artist saved from her German childhood. Llosa describes the work as follows:

“A mysterious hybrid, sphinx-like figure, it is a metaphor that can be explored by each viewer through their own inner resources. A robed figure rides a turtle, an ancient creature of the depths who carries her home on her back, safe on land or sea. The cat at the center symbolizes, as in many cultures, femininity and an uncompromising individuality. The head is encased in a bird-shaped helmet, another protective structure. This creature can move through all the realms of earth, sea, and sky, yet its body remains carefully protected and shielded to survive unexpected onslaught.”

As in psychoanalytic treatment, where one sees a “trajectory from fragmentation to reconfiguration,” a wooden sculpture of Gettinger’s, which opens the exhibit, approximates “the archetypal naked soul, but is also reminiscent of a tortured camp survivor with a shaved head,” Llosa says. “From working in materials such as wood, bronze, and stone, which one cuts away at in order to shape, Gettinger transitions to aggregate forms sculpted out of an original medium composed of resin and paper gleaned from magazines.”

The curator also sees echoes of artists ranging from the Netherlandish medieval painters Hieronymus Bosch and Pieter Bruegel the Elder to 20th century Jewish artist and illustrator Maurice Sendak (died 2012), of “Where the Wild Things Are” fame.

Gettinger’s series of pastel works titled “Dream Voyage,” in which she recollected scenes of her life in Germany, bear notable resemblances to Jung’s “Red Book.” Both, Llosa says, are chronological journals, which use both image and text, to tap into the author’s/artist’s unconscious, “sometimes even reporting the bodily sensations and sounds accompanying their making.” Where Jung gathered all of his images, almost exclusively gouache, in a single book, Gettinger’s “Dream Voyage” consists of pastel drawings, all of which are on 24” x 18” paper.

“Many creatives, such as James Joyce and Federico Fellini, have compiled dream journals, sometimes for decades, but an epic dream journal in images such as Gettinger’s is rare,” she says. “Gettinger devoted years to the discovery and working through of imagery to relieve the psychic pain endured all of her adult life. She was, in effect, enacting a transformation of her mind in the very process of creating this work.”

“Dream Voyage,” then, offers the public the change to both witness and to “accompany and track” Gettinger’s journey, Llosa says, as well as “the emergence out of trauma and the resolution of survival guilt.”

And that journey, Llosa adds, is distinctly Jewish.

“Gettinger clothes her characters in costumes recalling archetypes — both biblical and biographical,” she says. “She alludes in some of her writings to Max Beckmann’s habit of doing this as well.” And the “Night Ride” series depicts a Jew, with shaven head, being humiliated and persecuted by Germans. What may be a self-portrait depicts a “Jewish clown, jumping through hoops for a laughing pig, while a Nazi marks the time,” and another image shows an SS officer riding on a Jew, who crouches on all fours.

“Her images of Jewish life go back and forth between poignant portraits of a line of suffering survivors to the image of an ape wearing a phylactery — the ancient ancestor,” Llosa says. “Gettinger’s work cannot but recall the state of German Jews of her era. Jewishness was not a choice; it was an imposed fact of one’s identity: Bible and biography became one.”

A Nazi Refugee Transforms Her Trauma Through Art