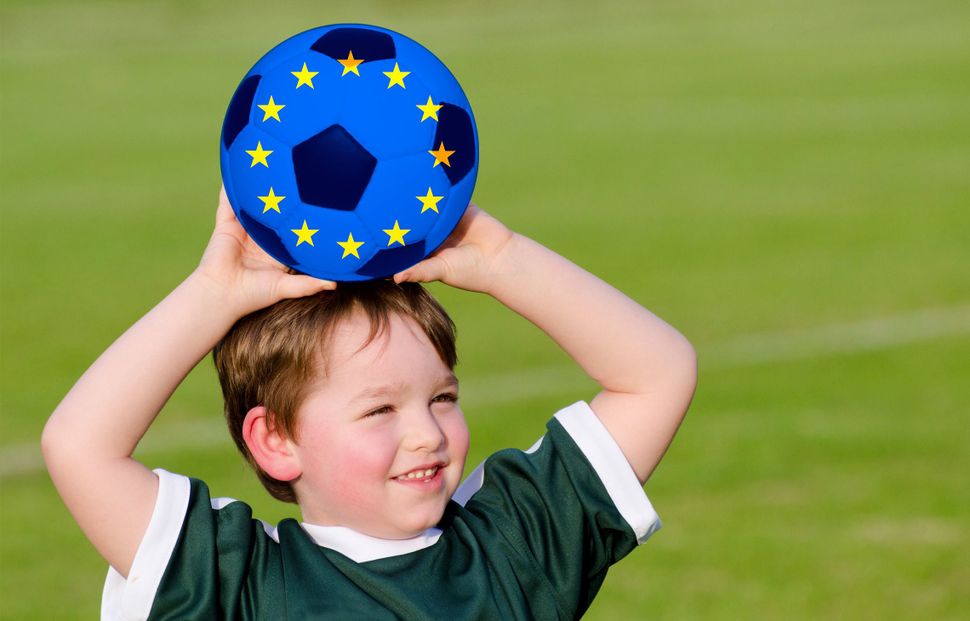 My 8-year-old son Cai didn’t like the tension around the Brexit talk. He knew an “out” vote meant we’ll probably move from our new home in Luxembourg since my Welsh husband would become ineligible to work in his current job for the EU. As the only British people he knows voted to stay, he can’t understand last Thursday’s result.

But I do. I grew up knowing exactly who I was. I was American and Jewish, the grandchild of immigrants, and those identities rooted me.

Since I became a mother, I’ve worried that I’ve failed to provide those roots for my kids. We’re not a part of a religious community. The kids were born in Israel but we raised them outside the popular culture, mostly because my husband never felt part of it. In Jerusalem they started school in English-speaking programs rather than Hebrew. By the time we left Israel, Cai was aware that he wasn’t part of the society in which he lived. He knew that was strange.

When my husband got the EU job offer, I was disappointed that we still wouldn’t be giving our kids roots. We’d be living in a society of expats – the foreigners of Luxembourg make up nearly half of the country’s population. Many of them are affiliated with the European Union, and their children attend a European school with fourteen different language tracks representing various member states.

My kids now attend the English section which includes British, Scottish and Irish but also Slovaks, Slovenes and Croats that don’t have their own language section. Thousands of students attend and it’s the kind of place where people come and go depending on whether their parents’ contracts get extended or they decide it’s time to return home.

It seemed like the exact opposite of what I’d wanted – an international hodgepodge that wouldn’t give a child a sense of belonging. My fear, particularly as my kids get closer to adolescence, is that they’ll grow up feeling alienated. If they get hit by depression as I did, they won’t have anything to root them. A sense of belonging can’t save you from depression. But it can provide sources of strength while you negotiate the tough years.

Then Cai surprised me. He started school and came home with fun reports about the atmosphere – both among his classmates and the students in general. This wasn’t because he felt suddenly British but because he started to attach to the concept of being European.

He told us entertaining stories about how different kids celebrate playground goals – the Germans pick up the ball and run, the French place the ball in the middle of the pitch and circle it, the British slide on their knees and everyone imitates the Spanish “Siiiiiiiiiii!”. He described the amusing scene when all the Primary kids gathered outside to sing the school anthem set to the tune of “Champs Elysées,” an old chanson from the 1960s that sounds like it was sung by Perry Como after a bottle of Beaujolais. His strongest bonds are with his English section classmates, but even this is a mini Europe – alongside British and Irish, Cai’s friends have parents from France, Germany, Slovakia, Slovenia, Croatia, the Ukraine, Greece, Romania and Kenya.

Much to my surprise, there is a European identity. Instead of kids feeling alienated by being away from home, the school encourages the sense that they’re all part of one community. This appeals to Cai and his classmates in a way I could have never predicted.

But also like me – the grandchild of Jewish immigrants who came from a violent European continent where they learned that you must fear “the other” and take care of your own to survive – they might have missed that their kids can find a positive way to identify with Europe. The demographics of the vote – 75% of 18 to 24-year-olds voted to remain in the EU – suggest that younger people were already adopting this new identity. Like my son, they are less encumbered by the past and more informed and inspired by hope.

Since I left the United States, I’ve had moments where I’ve felt myself choosing between identities – between country and religion and tradition and humanism. I know he’s only 8, but it’s encouraging to imagine that my son might not approach these identities as contradictions and opposites. Like the young Brits who who voted “in”, perhaps he’ll see the world as an inclusive place in which he can belong without having to take sides.