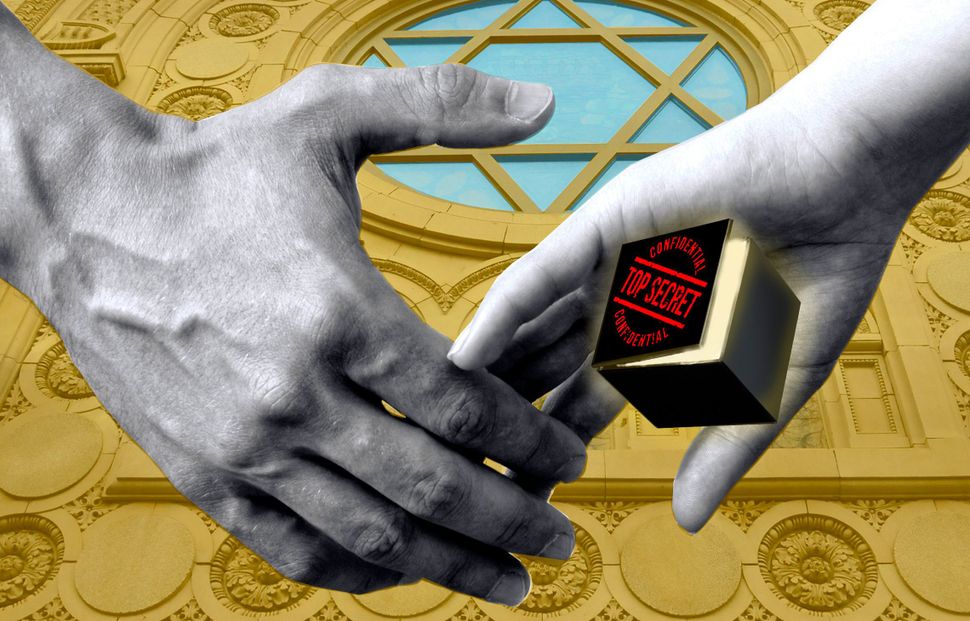 Editor’s note: The author asked to use a pseudonym because her Orthodox community does not know about her lack of religious observance.

When I met my husband, I still believed in God.

I wasn’t as committed in the demonstrations of my belief as he was in his, but it existed, surely. I was raised in a home in which we used electricity and drove to shul on Shabbos. But the decision to use electricity was a thoughtful one, discussed and decided based upon religious doctrine and communal standards; and yes, we drove to shul, but we did it every week, always there in time for the Ark to open up to the Torah’s majesty.

My husband grew up modern Orthodox, the way I grew up considered by his family to be not quite good enough. But his family cheated, using Shabbos clocks – timers that turned on the lights for his family – and staying home on Shabbos morning if the weather was too inclement for the mile-long walk. I always wondered why the one was better than the other.

That was more than ten years ago, when I still had the notion that I could fit in to Orthodoxy. I never did learn to integrate. My mother said I was born to be a heretic. She was probably right. Regardless, I changed one of the fundamental clauses in our unwritten marriage contract. My decision was not premeditated, nor was it done thoughtlessly. It was just one of many changes that has occurred, and that will yet occur, in what will be a long marriage. If you ask my husband, it likely didn’t come as such a shock.

The transition was gradual, at first. It started with a light switch. “I hate wasting electricity,” I said as I shut off the bathroom light and got into bed on a Friday night. Not long after, I was adjusting all electronics in the house – from the heat and AC, to the coffee maker and the microwave. When my husband goes to shul without me, I am on my computer. I never did give up use of my pen in the first place.

Regardless, I was willing to forgo the driving if it meant that I could stay home in the rain. That’s not right. I wanted to forgo the driving. I wanted to belong in his world, in the community he grew up in. I thought belonging meant I would have more worth. We met and married under that assumption. The issue of electricity on Shabbos was always going to be a struggle for me, but I was going to give it a shot, for my husband, for our marriage, and for our future children.

I do it all in full view of my husband. It helps that he doesn’t drink coffee. There is an element of secrecy, and thus perhaps hypocrisy, to this life. I lie a lot. As a result, my husband lies, too.

I am lying even now, as I write, because I will not sign my true name to this. The lying comes easily to me and I have little trouble with the moral implications.

When telling the truth means we will be shunned, cast off, I’m okay with the lie. Though we tend to be liberal on certain hashkachas, or kosher certifications, that not everyone follows, we keep a kosher home: strict enough to still consider it kosher by most modern Orthodox standards.

But would they still eat here if they knew I ran the dishwasher on Shabbos? If they knew I ate in non-Kosher restaurants? If I told them I don’t believe in God?

Someone once told me she would not eat at my house because I wear pants. And so, I lie. I lie to everyone, except for my husband. I lie to those in my community: when I sit in the pews in shul, I cover my hair and I move my lips along with the prayers, and I pretend I am one of them.

I lie to my husband’s family when I don’t correct their expectations, when I encourage their assumptions – when they ask how my fast was; when they come to visit and I take the time to set the AC controls ahead of time, and leave the lights on all twenty-five hours, as though it’s normal behavior for me.

I lie to my friends so that I don’t embarrass my husband, or shame him for outing the extent of my transgressions. I tell them I won’t eat that hot slice of pizza with them, and then, when I am alone, I return to the store and buy it for myself.

Don’t get me wrong: for this to all work, my husband transgresses, too. It truly is not possible to live in a “mixed marriage” without the more observant spouse becoming less so.

He never tells me not to turn off the light at night. He never even tells me to turn off the TV, and since I’m being honest here, he usually sits on the couch next to me, content with the knowledge that at least he isn’t the one who turned it on in the first place.

Lying is the best way I know to hold up my end of the marriage contract I signed. I often wish I didn’t have to lie – that I could just behave how I wanted to without worrying about judgment and acceptance from others.

The only times the lies really weigh on me, though, are when I lie to my children. We agreed to raise them as Orthodox Jews, and that is an agreement I am still willing to uphold.

However, it requires secrecy until they are old enough to truly comprehend my decisions. It also requires more compromise on my behalf.

Until I am ready to explain to them why I do what I tell them is not allowed, I will have to shield them from my actions. When they are old enough to see the flicker of the TV lights at night, I will have to learn to live without electricity on Shabbos while they are in the home.

Eventually, someday, we’ll be honest with them. I believe in telling them the truth, and I refuse to demean myself by teaching them that the person I am is not enough.

I know that my husband sometimes wishes that I was more observant, and that none of this was our problem. Very occasionally, I wish it, too.

I remember that yearning I once felt to be Orthodox. It was sincere, and, even though I no longer have such a desire, there’s something about that person I miss.

I am still drawn to the tradition and ritual life offered by Orthodoxy, even if I must supplement it with the unorthodox.

So if my husband wants the lie, I’ll give it to him. But, can I tell you a secret? We are happy. And if you won’t eat at our house anymore, our marriage will still be okay.

Are you in a mixed marriage or relationship? Send your story to [email protected] for consideration for the Sisterhood blog.