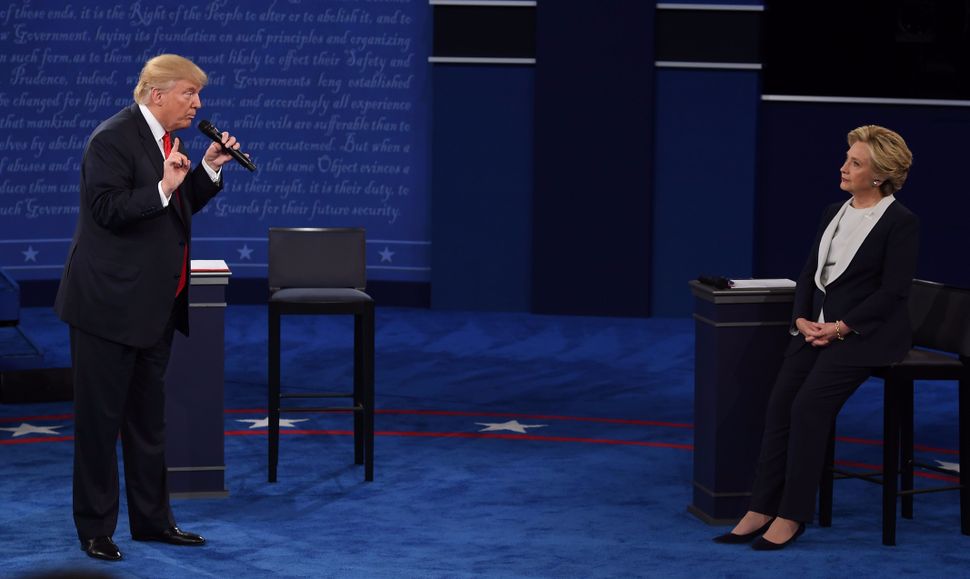 Trump stands above Clinton during the second presidential debate. Image by Getty Images

One of the creepiest aspects of the second presidential debate was the way Trump seemed, from his body language, almost to be stalking Hillary Clinton. When she moved to one side, he followed. He stood behind her, often with very little distance between them, silent, frowning, looking like he was growling. Body language expert Janine Driver called his movements a pre-assault indicator and said that she was getting “really nervous” for Hillary because he was “like a dog starting to get anxious.” Screenwriter Adrienne Parks wrote in Huffington Post that this was a kind of “upstaging,” where he was trying to seize power and divert attention away from her and back to him. “This was infuriating to all of us who have ever been forced to stand our ground on the rigged white male playing field”, she wrote. “I felt the unfairness of it to the bone. This was live televised assault and battery with intent to maim, politically rape, and kill.”

I was also extremely uneasy watching Hillary speak while this large, menacing creature was behind her, a person who had just promised to dedicate himself to sending her to prison. As a short person – I’m five feet tall – I have spent most of my life dealing with situations in which the men in the room loom over me. Of course most are not dangerous. But in that kind of physical imbalance, even a little ill-will can feel threatening. And in situations where men actually do have more power than women – such as Orthodox synagogues, rabbinic courts, school playgrounds, and many workplaces – the feeling of powerlessness that you get from being surrounded by men hovering over you can be very real.

I asked my Facebook friends if any of them felt triggered by Trump’s body language. The resulting extensive thread offered a resounding “yes”. Here are nine situations that other women and I have been reliving as we watched Trump stand near Clinton in the menacing way he did:

(1) Abusive ex-husbands. Many women I have spoken to have been reliving nightmarish situations of abuse from ex-husbands. One women told me the way her husband used to stand behind her when she stood in front of the mirror, telling her how many of her body parts are “fat”, “ugly” and “disgusting.” She has been happily remarried for many years, but Trump has been dredging up many old, painful memories and fears. “It is the accumulation of my lived abusive assaults, dismissiveness, egotistical mansplaining, sexist, misogynist, ‘women don’t know anything’ experiences as a woman all wrapped into one person,” she said about watching Trump.

(2) Bulldozing coworkers. There is countless research about men bulldozing women in work situations – talking over women, dismissing women, infantilizing women, mansplaining, manterrupting, gaslighting women, and harassing women. Trump triggers many of these situations every time he talks to or about women. During the debate, he looked like every fiber in his being wanted to crush his rival. It was like all your worst workplace experiences bound up in one scary being.

(3) Some rabbis. The thing about being an Orthodox Jewish woman is that you will always have to answer to a man. No matter where you live, what community you belong to, or what you do for a living, the Orthodox rabbi is always the final say. You are expected to ask his ruling about life decisions, you need his authority to make certain choices, and his voice is the one that ultimately matters. I have been mansplained by so many Orthodox rabbis throughout my life, men who believed that it was their job to correct me about my feminist ideas, who were patronizing, condescending and obnoxious. (#NotAllRabbis. I know. I’m just saying). Trump, even though he is far from being a rabbi, took the same pose that many rabbis take when they are asserting power – standing stoic, holding his wrists in a kind of false patience, looking down with a frown-grimace, reminding people that they are in charge, more knowledgeable than you. And I’m not alone. One of Barry Freundel’s victims wrote that she was very triggered by Trump for the same reasons. I totally get that. Trump and Freundel share a lot of similar traits. Obviously not all rabbis are Freundel. But the Trump stance is used by some rabbis as an instrument of control.

(4) Men in shul. There is often a similar dynamic with men in shul. One woman, a gifted singer who loves leading services, told me that many times when she is leading, certain men will sing over her, pushing his own liturgy from the pews. I have had the same experience leading services. In my book, The Men’s Section, some of my male interviewees admitted doing this intentionally – surrounding when cantors and taking over “unofficially” because they don’t believe that women know the “nusach” (liturgy) well enough. In Orthodox shuls, the domination of men is obviously more pronounced. As a woman in an Orthodox synagogue, it is easy to feel completely overshadowed by men, who do all the talking, singing and leading, while women are invisible both literally and figuratively. Trump’s stance, coupled with the way he talks over and interrupts Hillary, was a reminder of all those places in which the space belongs to men because they are men, and when even when women try to occupy space, men take over with their bodies and voices.

(5) Cocktail parties, subway cars, and other crowded places. In general, I have noticed that I don’t like standing around in crowded places, because I have to make too much of an effort to be able to participate in a conversation where most people are bigger, stronger and louder than me. At cocktails parties, I experience the same dynamic of feeling crushed. One time, my husband – who stands at 6’3” – and I were standing outside a theater waiting for the doors to open. They were late. The crowd was getting anxious. I started hyperventilating as I felt the walls closing in. My husband was fine, because he could see over the crowds. But I felt like I was getting buried alive. Trump’s body language reminded me of that, too. The huge advantages that tall men have in this world over small women. We can be crushed at any moment.

(6) Judicial courts, especially rabbinic courts. The dynamic of the debate was also reminiscent of a court room. One woman told me that as a lawyer, she was triggered by his body language because it reminds her of how she sometimes feels among male lawyers in the courtroom. It is another kind of space where men can wield power over women via powerful body language. In rabbinic courts, the dynamic is even worse. Here, only men can be judges. And according to Jewish law, only men can give a divorce. So the courts embody patriarchal power and women’s powerlessness. (To get a real sense of women’s powerlessness in rabbinic courts, watch the film Mekudeshet.) Trump’s body language reminded me of that, too. That is, of the many times I have accompanied women in rabbinic courts trying to get divorced and feeling completely helpless among the men. It is and was chilling.

(7) Abusive fathers. Another woman commented that Trump reminded her of her own father, how he used to tower over her, yell at her, and try to control her in many ways. I imagine that anyone who had an abusive father can relate. This should also be a cautionary tale for parents, to be careful how we use our physical presence to try and control our children.

(8) School playgrounds. There is an abundance of research showing that boys dominate school sports grounds and make it very hard for girls to be included. I have seen this as an educator, and I remember experiencing it as a kid. Trump felt like one of those bullies on the court who refuses to pass you the ball, who is trying with all his might to humiliate you. When he said, “You’ll be in jail”, and then the crowd laughed, it felt like all the kids on the basketball court laughing at you. His goal with the stalking was to get Clinton to cower in her corner and never come back.

(9) Walking down the street. And then, there is the harassment that happens to so many women as they walk down the street. There is now an entire movement about this, since the majority of women and girls experience street harassment and catcalling at some time in their lives.

I must confess that, perhaps counterintuitively, the street harassment is the least significant issue for me of everything on this list. Sure, a man once exposed himself to me on the street when I was around ten. Another time, a man grabbed my genitals in front of the Avenue J train station in Flatbush when I was a teenager. I’ve had lots of experiences like that. But these do not even register for me as traumas. The real triggers from Trump are the ongoing relationships women have with people in their lives – workmates, community members, and relatives – whose sinister, cruel, emotional manipulations are often constant and seemingly inescapable.

Watching Clinton try so hard to lead while this awful narcissistic abuser was lurking behind her felt like a metaphor for life. Where women are trying to do their thing – to speak, to work, to emote, and to shine – while their mean-controlling detractors stand behind them. That, for me and for others, has been extremely painful to watch and to experience vicariously. Because it is all too real.

Dr. Elana Maryles Sztokman is a Jewish feminist educator, consultant and award-winning author — a two-time winner of the National Jewish Book Council award. She is the founding director of The Center for Jewish Feminism and blogs at www.jewfem.com