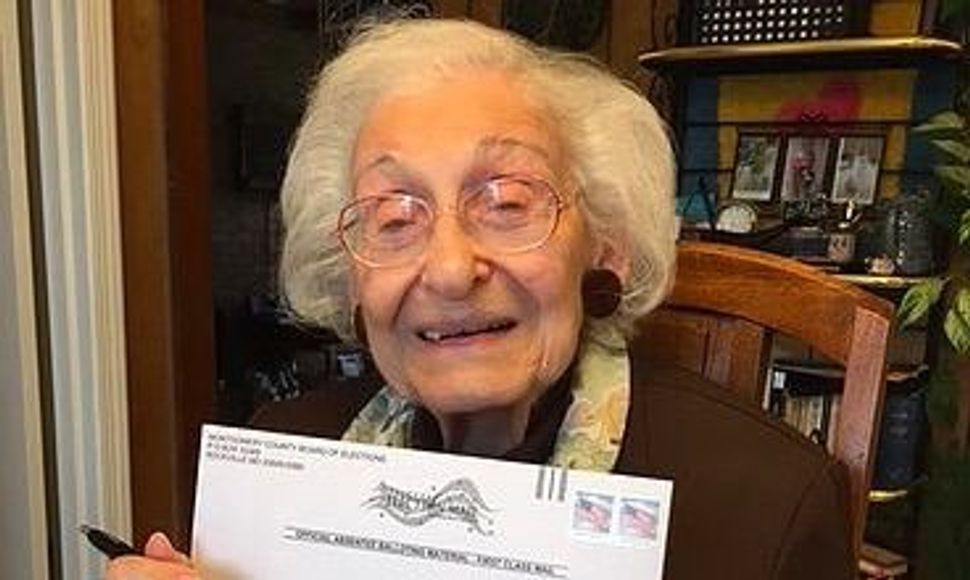 Some women born before women in the United States got the right to vote, in 1920, are now casting their votes for Hillary Rodham Clinton. Like the symbolism Michelle Obama spoke of about being a black family waking up in a White House built by slaves each morning, the thought of women born into a world in which they were disenfranchised at the polls and are now about to cast a ballot for a female commander in chief speaks volumes.

One granddaughter very much aware of the symbolism is Sarah Bunin Benor, Associate Professor of Contemporary Jewish Studies at the Hebrew Union College in Los Angeles, whose field is appropriately language and literature and sociology. Benor‘s ninety-eight year old grandmother Estelle Liebow Schultz asked her daughter Roberta Schultz Benor to take a picture of her with her marked absentee ballot and her granddaughter posted to Facebook. The photo quickly gained more than 1000 likes and Sarah Benor realized something larger was at work here.

Benor explained in a phone interview that when her grandmother voted in the primary elections for Hillary Clinton, she posted the photo and there was some interest. Her grandmother is on home hospice for a heart problem and was told eighteen months ago that she would probably have six to twelve months to live. Estelle Schultz was determined to live long enough to cast her ballot for the first female president and now to live long enough to see the inauguration. Her grandmother asked her mother to photograph her filling out her ballot on a Wednesday, the day she gets her hair done. When Benor posted to Facebook there was even more response and Benor began to realize how symbolically laden her grandmother’s vote truly was. At her Los Angeles synagogue IKAR, she spoke with Tom Fields-Meyer, a journalist who thought the story of her grandmother and other women born before 1920 voting for a female president was worth a website and blog. With that, I Waited 96 Years! which currently contains the stories of forty voters and is seeking more, was born.

Benor has three goals for the site, she told me by phone. One is to “highlight this momentous watershed moment, when for the first time people can potentially elect a woman.” The second is to support Hillary Clinton and her campaign and the third is to “honor these women.” Benor says of her grandmother and other women on the site that they have so much “wisdom and life experience, and not enough attention,” and that she wants to “honor and respect older people” by telling their stories on the site. Many of the women featured currently on the site are Jewish, but Benor would like to have women from all walks of life on the site; she reached out to Virginia McLaurin, the 106 year old who was welcomed to the White House to dance with the Obamas in honor of Black History Month.

Reached by phone at her home in Maryland, Estelle Schultz explained, “I was born before I was allowed to vote and a woman president is very intriguing to me.” She added that Germany and Britain currently had female leaders and avowed that it was time for the United States to catch up. Schultz told me that when she was assistant superintendent of the Compton school district in California, she always encouraged the men and women “who were under my regime to go back to school, get more education, so they would have more to give back to the community in which they lived.” She always hoped her employees would “make the most of what they can, of which they are capable.” When asked whether she thought having a female president would give women a boost of encouragement to be and do more she said, “Yes, I certainly do. It will encourage women.” You can read more about Estelle and her compatriots on Benor’s website.

Beth Kissileff is the author of the novel Questioning Return and the editor of anthology Reading Genesis. Visit her online at www.bethkissileff.com