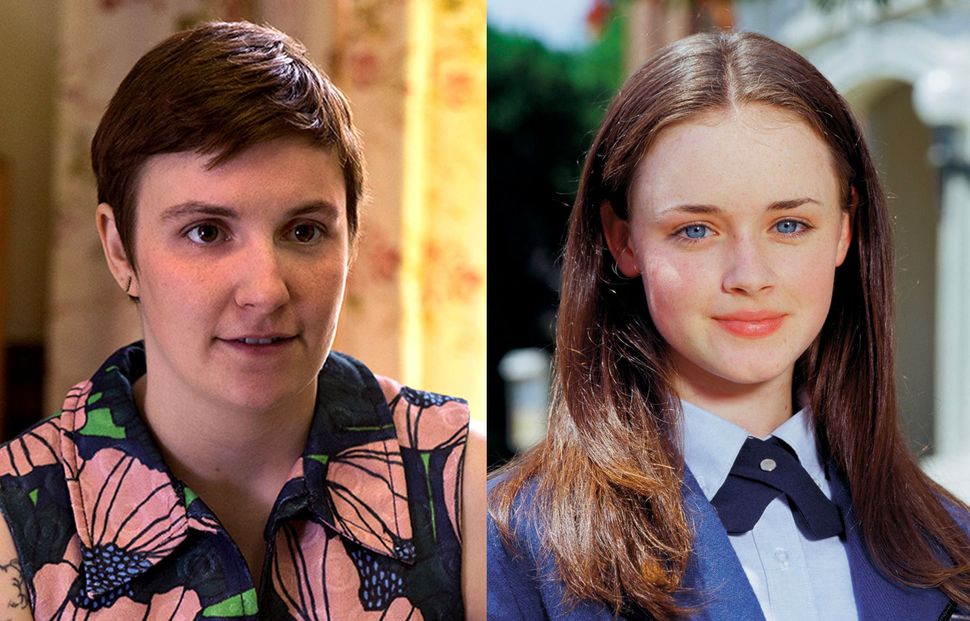 I’ve spent the last day or so preoccupied by a question: Why is Hannah Horvath, Lena Dunham’s “Girls” protagonist, this villain, not just an anti-heroine but (conflated with her creator) blamed for the election of Donald Trump… while Rory Gilmore, that other television-show protagonist, is… fine, somewhat despised in light of her reappearance in the reboot miniseries as a floundering 32-year-old (see Thea Glassman on Rory, and on the show’s Jewish angles), but not poised to become the new face of millennial entitlement?

“Girls” sets things up so you’ll hate Hannah — hate her, specifically, for thinking that she, a college graduate, should be supported by her parents while pursuing an aimless writing career and working at a publishing office for free. Gilmore Girls, “A Year in the Life,” offers up a Rory whose work life consists of unpaid journalism work and a possible book project that is, I found, treated on the show with a seriousness rarely given to published, or at the very least completed, books. If anything, of the two characters, Rory’s not just the wealthier, but arguably the more entitled. So why is the world more forgiving of its Rory Gilmores than its Hannah Horvaths? Why is it that the women who set off those “privilege” alarm bells (note that men never do) are often not the most privileged?

To shed some light on this, check out Jia Tolentino’s New Yorker piece about Ivanka Trump, specifically the part up top where Tolentino close-reads a book Ivanka published in 2009. As Tolentino explains, in the book, Ivanka frames all her advantages as, paradoxically, obstacles she’s had to overcome: “Her last name, her looks, her youth, her privilege have all colluded to make people underestimate her.” Why is the world more forgiving of its Ivanka Trumps than its Hillary Clintons? Why are the women who float around in a sea of good fortune viewed more favorably than the ones who’ve made the most of a still-significant but more limited set of advantages?

I’m reminded, once again, of a much-noticed line from law professor Joan C. Williams’s Harvard Business Review story about Trump’s working-class appeal: “[T]he white working class (WWC) resents professionals but admires the rich.” Except what I’m noticing here is a variant of that formulation: American society (not just/especially the “WWC”) resents women who’ve succeeded largely on their own merits, and obsesses over where these women had a leg up (which, in our flawed meritocracy, successful people will often have had!). But women who are just all-around advantaged — unearned wealth, good looks, charm — are admired rather than privilege-checked.