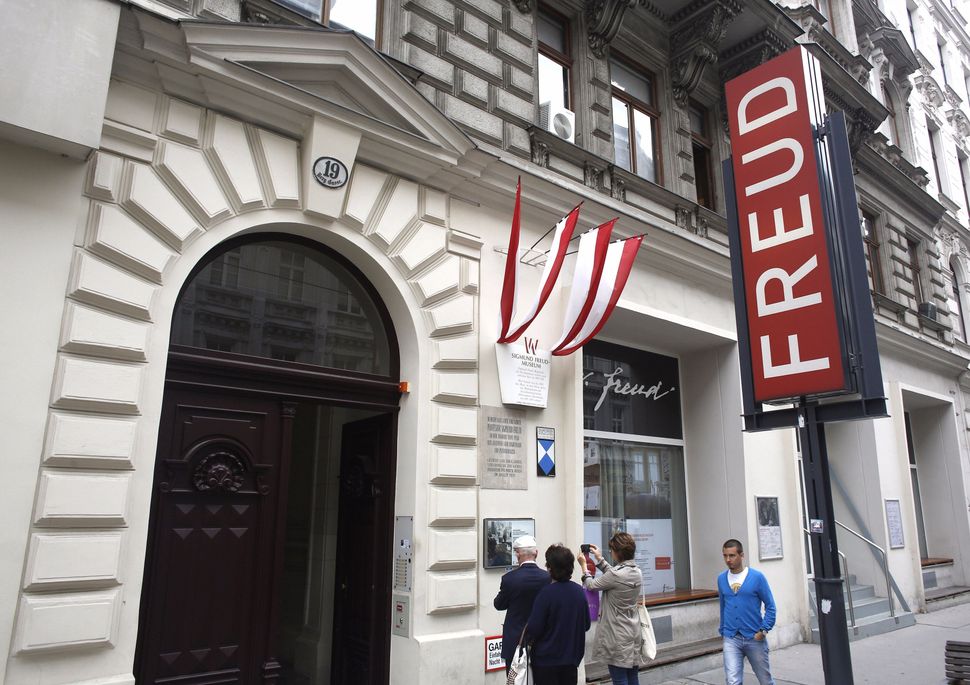 The Sigmund Freud Museum in Vienna. Image by Getty Images

Since Trump became President Elect, my ‘fear belly’ has returned. I first experienced this acidic-laced stabbing in the gut as a child listening to my mother’s stories about the horrors of her childhood in Dabrowa, Poland. By the time I became a therapist in mid-life, fear belly had largely dissipated. Helping patients find their strength and resilience helped me find my own.

But Trump’s surreal ascendancy has reignited my feelings of bottomless foreboding. I am shaky, metaphorically looking over my shoulder, the drumming of Nazis’ boots hissing in my ears. Days after the election, swastikas were found scrawled on four dorm room doors at New School, where I taught journalism for many years. A friend in nearby Astoria, Queens reported being called a ‘kike’ as she walked down the street. These incidents occurred in New York City – the ‘bubble’ of tolerance! The Southern Poverty Law Center reported over 700 cases of harassment or intimidation in the United States between November 9th and November 16th.

How can I treat patients when the world is spinning out of control?

My sisterhood of Jewish therapists is having the same dilemma. Ellen Garbuny lives outside the bubble, in Butler, Pennsylvania, a small town with not many Jews or liberals. For nearly two weeks after the election, Garbuny, whose parents escaped the Holocaust before Kristallnacht, felt such exhaustion she had, “PJs by 6:30, asleep by 10:30, up at 3 worrying, my ability to focus – nil…”

Her extreme fatigue is lifting, and she is once again warbling what she calls a ‘Donnie song’ to Don, her husband of 36 years. Yet Garbuny still feels a bit detached from her patients, especially the ones who voted for Trump. She reminds herself of advice received from a former supervisor, who’d assigned Garbuny a KKK member as a patient. Garbuny complained, “He scares me,” and was told, “You can’t always treat nice people. This will make you a better therapist.”

True. Until now I’ve managed to find the humanity in all my patients, including those who’ve lived (to my eyes) heedless lives, paying little attention to how their actions affected loved ones… However, the cesspool of hatred and verbal squalor given air during Trump’s campaign and seemingly gaining strength daily, has left me disgusted and despairing at the depths to which people can descend. Can a ‘disgusted’ therapist be a good therapist?

Since the election Barbara Turk, a therapist in Harrisburg, Pennsylvania has also experienced moments of feeling “that people suck.” Days after the election a patient who surmised her therapist didn’t share his ardor for Trump said, “I hope you don’t hate me!”

Several distant relatives of Turk’s perished in the Holocaust. Since November 9th she’s awoken to nausea every morning, necessitating a prescription for Zofran. She told her two adult daughters, who think she’s in panic mode to “humor mom and keep your passports current.” She fled with them once, an hour after the accident at the nearby Three Mile Island Nuclear Reactor Site. An equally frightening moment occurred when her youngest daughter moved to New York right before 9/11. Yet after the initial upset, Turk wasn’t as emotionally fractured during either of those events as she is now: “I don’t want to be blindsided and ignore any blatant signs of imminent danger reminiscent of Nazi Germany.”

In the best of times, immersing oneself day after day in the tortured psyches of others takes a toll. Since Trump’s victory, the mental cost of such work can be astronomical. Turk says, “I do a lot of self care – hanging out with my grandchildren, Zumba, revisiting memories that make me laugh, as well as my daily mindfulness practice.” When anger or other distracting emotions arise while she’s with a patient, she reminds herself, ‘This is their session, not mine.’

Since the election Linda Franco, a Hasidic therapist in Bedford-Stuyvesant Brooklyn, has found herself experiencing secondary trauma while in sessions with minority patients. “Their anger and anxiety over the future triggers mine and I lose focus… I have to reground myself.”

Franco says, “My family aren’t Holocaust survivors but as Jews we think we’re eventually gonna get it wherever we live.” She spent time working in Crown Heights. That’s where in 1991 riots broke out between the black and Hasidic communities after a vehicle that was part of a police motorcade carrying Menachem Schneerson, grand rebbe of the Lubavitch ran down and killed seven-year-old Gavin Cato. On her way to see patients in the now-tranquil neighborhood, Franco would think, “A pogrom can happen anywhere.”

In the present day charged atmosphere, wearing your religion literally on your sleeve brings risk. Franco says, “Every minority group feels fear. If I walk around in my head scarf and a Muslim friend in a hijab, why do others care? We’re not bothering anyone.”

Her answer is to promote understanding of our differences. “Preventing racism and prejudice can occur only from accepting each other more. I can’t ask for understanding if I’m not offering it myself.” In the past difficult weeks she’s felt more of what she terms a “call to Jewish Action. What can I do to decrease the hatred? It’s action, not words.”

I too feel the best coping mechanism is to be pro-active. I am writing postcards to Trump denouncing his decision to appoint alt-right-ist Steve Bannon, signing petitions, making plans to attend the January 21st Women’s March on Washington. I’m also looking a lot at pictures of my late mother, Bernice Amatenstein, who at 14 risked her life while imprisoned in a work camp to steal a potato to feed her ailing friend. Esther Kaminski. I am a Jew and if my lot is to be persecuted, my heritage remains one of courage and undying love.

I am doing extra self-care – including seeing my own therapist again after a long hiatus and rededicating myself to being of service. I started a support group for women who are triggered by the present climate. I sit with patients, feel their grief and try to impart hope.

Since another part of my heritage is being a fatalist, I also renewed my passport.

Sherry Amatenstein, LCSW is a NYC-based therapist, journalist and editor of the anthology How Does That Make You Feel? True Confessions From Both Sides of the Therapy Couch