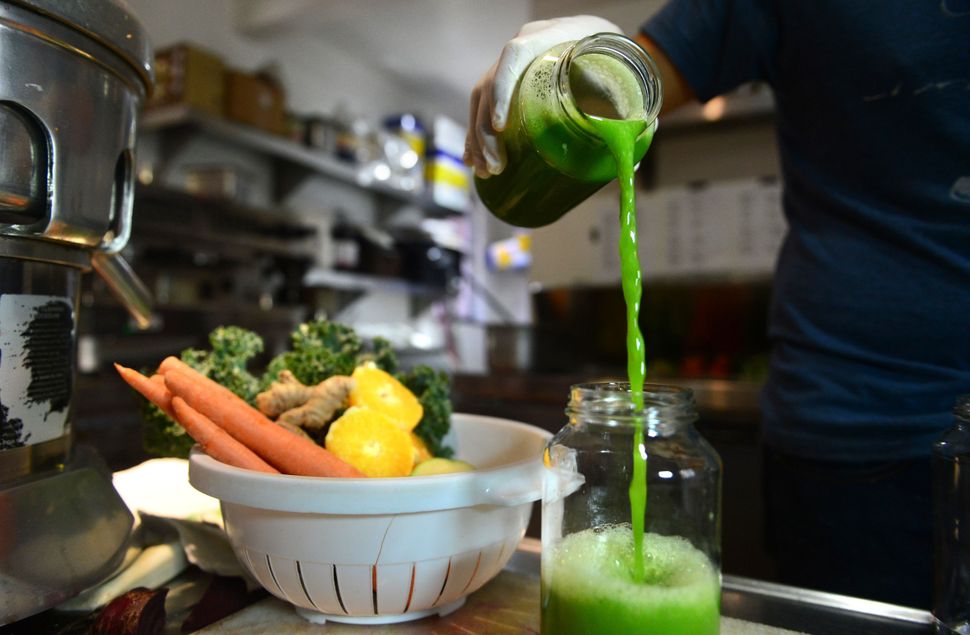 Can a “Cleanse” combat oppression? Image by Getty Images

“Billed as an ‘anti-oppression diet,’ the cleanse runs from Jan. 1 to Jan 21, the day after Donald Trump’s inauguration and the day of the Women’s March on Washington. Participants will receive a free daily emailed ‘menu’ of articles, quotes, discussion topics, and suggested actions curated as a guide to better understanding and combating systems of oppression.”

While her piece is mainly descriptive, Cauterucci writes favorably of both projects: “Like the Safety Pin Box, this cleanse seems like a useful way for people surprised and horrified by Trump’s victory to make some concrete moves toward active allyship.” Another interpretation: Like the Safety Pin Box, and the Pantsuit Nation book, and indeed the entire privilege-checking project (which… more on that elsewhere), The Complicity Project is about, as Singal puts it in his piece about the Safety Pin Box service, “put[ting] liberal, privileged white people and their own inner battles at the center of the struggle.”

Unlike the Safety Pin Box, there’s no black female entrepreneurship angle here. (The Complicity Cleanse “is totally free,” and organized by a white woman.) What, then, is there? There is a website, which includes “less jargon” as one of the cleanse goals, but which also urges participants. There is also an Instagram, where a post with an inspirational quote from Albert Einstein is followed up by one from project organizer Jackie Sumell. There are “concrete” actions in the mix, such as advice to attend City Council meetings, but reading through the website, those would seem to be the exception.

The Complicity Cleanse strikes me as well intended but dangerously flawed. Sumell is an artist-activist whose other work involves raising awareness of the cruelty of solitary confinement in prisons, and of the racism behind the demographics of who winds up in prison in the first place. While she herself is white, her specialty would seem to be quite far afield from encouraging navel-gazing on the part of rich white people.

But if The Complicity Cleanse is a shift in focus, is that necessarily a problem? As the charity galas and PBS tote bags might suggest, people do sometimes need a nudge where good deeds are concerned. Maybe the “cleanse” gimmick is the kick someone (but who?) would need.

And I give The Complicity Cleanse points for subverting those January calls – aimed especially at women – to achieve purity through dieting. If this is a stunt mocking the idea of “clean eating,” and gently making the point that energy spent wondering whether that kale is organic could be better spent elsewhere, I approve.

So why am I skeptical?

-Most immediately, because a (greater) emphasis on personal purity with an upscale twist – what the “cleanse” approach appeals to – is exactly the last thing progressive activism needs at the moment. What’s missing is from activism is not introspection on the part of the progressive privileged. Which is, alas, what the project’s emphasis on “little things to do every single day,” and staying at home watching YouTube videos and reading endless pdfs, and becoming more “conscious,” amounts to. That, and the “cleanse” weaves in random bits of self-improvement advice (keep a gratitude journal; leave your cellphone out of your bedroom) with no apparent connection to fighting oppression. (By that standard, maybe drinking green juice is also a form of resistance!)

-Attending to the personal purity of progressives isn’t just annoying, but is misdirected energy. The election taught us that whole lot of the country isn’t convinced that sexism and racism are problems. A president-elect just won by appealing to those who believe white Christian men are the real victims. And that’s who needs convincing, or just harsh criticism. Progressives sending more and more reading materials to those already on the same side isn’t necessarily a disaster, but isn’t addressing the urgent (and far more difficult) problem that does exist.

-The “complicity” focus, as stated is about erasing the distinction between active oppressors and the unconsciously bigoted. And… that’s not a distinction it’s helpful to erase! As a woman, a Jew, I know full well that there’s inadvertent sexism and anti-Semitism floating around, but can we please pick now as the moment to prioritize addressing the overt and tangible forms of these and other bigotries? This doesn’t mean dividing the world into saints and sinners and putting all who aren’t yelling slurs into the former category. It does mean being able to call unambiguous examples of racism, sexism, and so forth by those names.

-Being a decent person is not that complicated. Pretending it is – that is, that everyday anti-racism requires recognizing a photo of Audre Lorde – is unhelpful bordering on damaging. It doesn’t take special training, formal or informal, to treat others with dignity, and to see that policies like a Muslim ban are wrong. Acting as if it does winds up excluding and alienating those who aren’t available for hours of self-education on the concept of patriarchy, let alone to “[r]esearch ‘Undoing Racism Workshops’ and attend the same.” It’s an approach that turns anti-oppression into a form of snobbery.