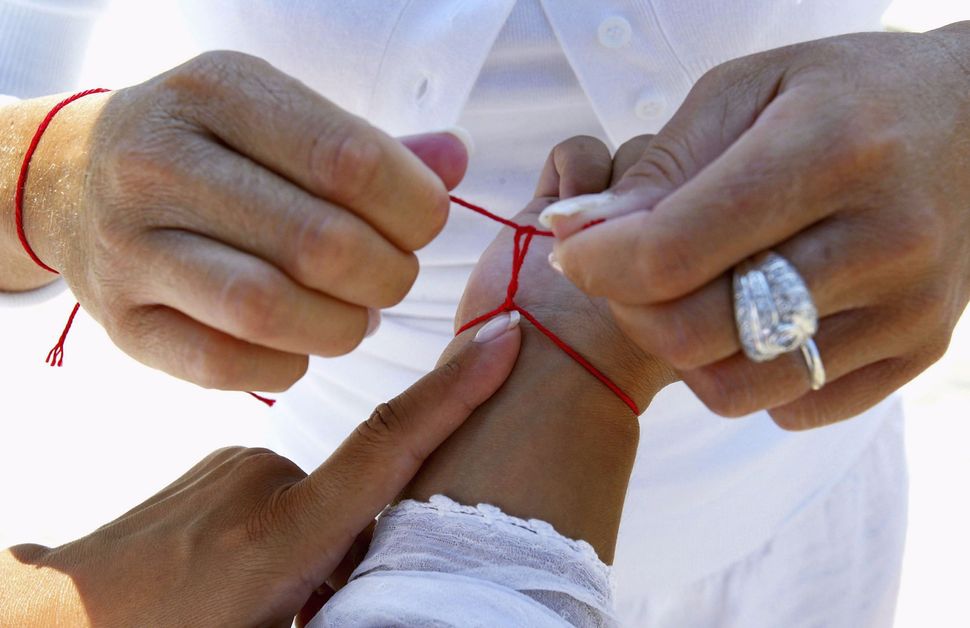 I have something I have to admit, and like ripping off a Band-Aid, it’s probably best if I just come out with it: I – gulp! – turned 40 this year.

This year’s been tough. My mom died just a few months before I turned 40. She slipped away quickly, and all of a sudden I woke up 40 and wondering if I was old enough and wise enough for that age.

So while I’m at the point in life where traditionally I could start studying Kabbalah, I’d rather turn back the clock and spend a few more days with my mom. My younger daughter, the one we call a feisty troublemaker, was born with some major health problems, and caring for her consumed my life for the past few years. And my older daughter is reaching bat mitzvah age next year, so I’ve also begun that stressful time known as bat mitzvah planning. What I wouldn’t give most days to sit down and have a cup of coffee with my mom.

Maybe part of what’s struck me about turning 40 is that it is my first Jewish age-related milestone. I converted when I was 27, past bat mitzvah age. When I stepped out of the mikveh 13 years ago, I strode right into the life of a Jewish adult with barely an associate’s degree in being Jewish.

In Pirkei Avot Yehuda ben Tama lays out a timeline for what Jews should be doing by certain ages: studying the Bible at age 5, the Mishnah at 10, observing commandments at 13, the Talmud at 15, and deep study by age 40. Later rabbis interpreted that to mean you shouldn’t study Kabbalah until you are 40 and married with children. I missed many of ben Tama’s key dates, but here I am – 40, Jewish, married with children – and I could conceivably begin a course of study at the appropriate time. (Admittedly, I’m not a Torah scholar or a man, some traditionalists’ additional criteria for studying mysticism.) Why aren’t I more excited and honored to reach this stage?

I picked up a basic understanding of Kabbalah from my studies for conversion and in immersing myself in the Jewish community. But I didn’t have much interest in mysticism and it’s not at the forefront of my non-Hassidic circle, and when it came to sitting down and reading about [Kabbalah concept] Ein Sof, my eyes glazed over and I read the same passages again and again. I ended up tossing aside the books, saying, “Eh, I’m not even 40. I don’t need to worry about it.”

Anyway, who can think about mysticism when you’ve got a preteen to corral and a wobbly two-year-old who’s just learning to walk? Between the toddler and the budding bat mitzvah girl, I barely have time to brush my teeth most mornings, let alone focus on ten Sefirot.

But then instead of shoring up my store of 40-year-old brain cells to study Kabbalah, I’m learning how to mourn for a non-Jewish parent and bracing myself to stand up and say the Mourner’s Kaddish.

It wasn’t a Jewish funeral, of course, so I felt off-kilter. I’ve been to both Jewish and Christian funerals, and I quickly learned to appreciate the Jewish way. Non-Jews are shocked to hear a Jew has died and already been buried, but after my mom died, the week and a half until her funeral seemed like an eternity. What are you supposed to do during that time? I don’t have a clue what I did.

I began saying Kaddish when I went to synagogue. One of the traditional phrases that comforts Jewish mourners, in English “May you be comforted among the mourners of Zion and Jerusalem,” gave me strength as I started reciting Kaddish. Only after I stood up for the first time did I understand the value of having at least ten Jews there, as well as the other mourners standing and reciting the same ancient prayer. I was relieved to be with other Jews and have a set job to do during the service. This kind of mourning, saying the Kaddish on a regular basis, isn’t a suggestion or an outline of stages of grief that you might go through, it’s an easy-to-follow plan for the ensuing 11 months.

My rabbi gave me a book, Mourning and Mitzvah, after my mother died, a book that’s both a journal and examination of Jewish mourning. In lieu of sitting shiva, I spent the early morning hours before the kids got up working through the book. In one section, author Anne Brener writes about the Kabbalistic idea of the souls of the deceased being cleansed of their earthly shmutz by being flung across the heavens in giant catapults. That’s such a vivid, concrete image and somehow the otherworldly goofiness of it got through to me. Picturing my mom’s spirit bouncing around the heavens made me giggle as I was sipping my morning coffee. With this crazy, almost comical image, I’ve been able to reconcile the death of my non-Jewish mom with an odd bit of Jewish learning. As the days go by, I imagine her shaking off the dust of a long and sometimes difficult life on this earth. Finally, I’ve learned a tiny bit of Kabbalah.

Amy D. Lerner is a freelance editor, writer and wife and mother of two girls. She lives in Harrisburg, Pennsylvania, and blogs along with the rest of her family.