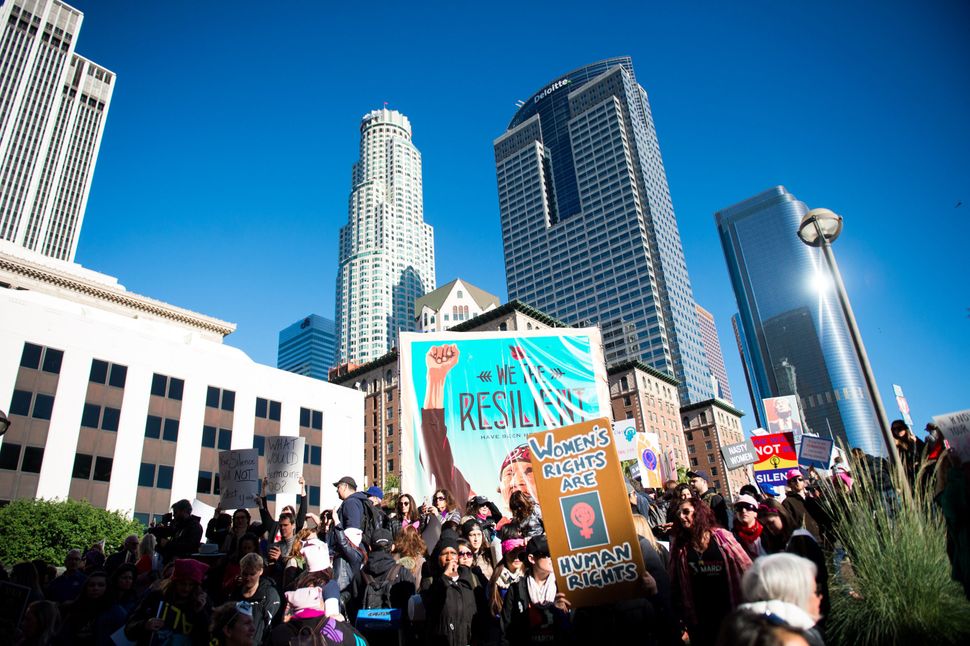 Resolve on display at the Los Angeles Women’s March. Image by Getty Images

Each morning, observant Jews pray that God will “zokef kefufim” — straighten the bent. I used to understand this prayer literally: that those with physical disabilities should be able to participate fully in life’s activities. But with the intransigence of our new president, I’m now translating this prayer figuratively and re-assessing its message. The fact is that we all need to know when to bend and when to straighten.

On every level, and particularly with regard to issues important to women, Donald Trump has shown himself unwilling to bend. Last week, The New York Times described him with precisely this term—”unbent.” Politico reported that Hillary Clinton’s aide who helped her prepare for the Trump debates impersonated him in part by wearing knee pads to keep his legs straight. Since taking the oath of office, Trump has been confirming his rigidity by combatively invoking “America First,” despite its ugly history, and reiterating that his inaugural audience was the largest ever, flying in the face of the facts. The only thing he bends is the truth. Call him “stiff-necked.”

When women — motivated by the release of the 2005 tape in which Trump bragged about grabbing women by the genitals — came forward with testimonials that he had sexually assaulted him, he not only denied the accusations but doubled down: He claimed that every single one of his accusers was lying and threatened to sue them. Former Apprentice contestant Summer Zervos, who says that the president had kissed and groped her without her consent when she appeared on his program, has now filed suit for defamation.

Vice President Mike Pence similarly is intractable when women voice their needs. In Congress in 2007, he introduced the first federal measure to “defund” Planned Parenthood, blocking low-income patients from birth control, cancer screenings, and STD screenings and treatment. After each measure failed, he introduced another and another — five in all — and threatened to shut down the federal government if he didn’t get his way. Now he may very well achieve his goal.

Yet there are times when steeling one’s spine is the best course of action. When political opponents questioned whether Obama was born outside the U.S., Obama joked about it. When Trump mocked Hillary Clinton’s appearance, she ignored him.

The Women’s March protesters this weekend were unbending in the best possible way. I participated in the New York City march, surrounded by hundreds of thousands of reasonable yet resolute people who proclaimed that having a sexual predator in the White House is not normal and not acceptable.

We have a more sophisticated awareness today than we did a generation ago about sexual harassment, assault, and slut-shaming. But only some political leaders have deepened their understanding of these issues, straightening their ways.

Joe Biden, as chairman of the Senate Judiciary Committee in 1991, diminished Anita Hill’s testimony of sexual harassment against Clarence Thomas during his Supreme Court confirmation hearings—and by extension dismissed the claims of women who had been harassed in the workplace. But three years later, Biden championed the Violence Against Women Act and later worked with President Obama as a leader to combat sexual assault on college campuses.

Also in the early 1990s, Hillary Clinton engaged in slut-shaming when she denigrated the credibility of women who claimed they had been sexually involved with or abused by her husband. But she evolved into a champion for women, protecting and expanding reproductive health care and family leave and child care.

One of the most moving sights for me at the Women’s March was seeing how many participants marched up Fifth Avenue with canes and walkers. They may not be able to stand up straight, but they refuse to be beaten down.

Leora Tanenbaum is the author of I Am Not a Slut: Slut-Shaming in the Age of the Internet.