The Radical Innocuousness of the Women’s March 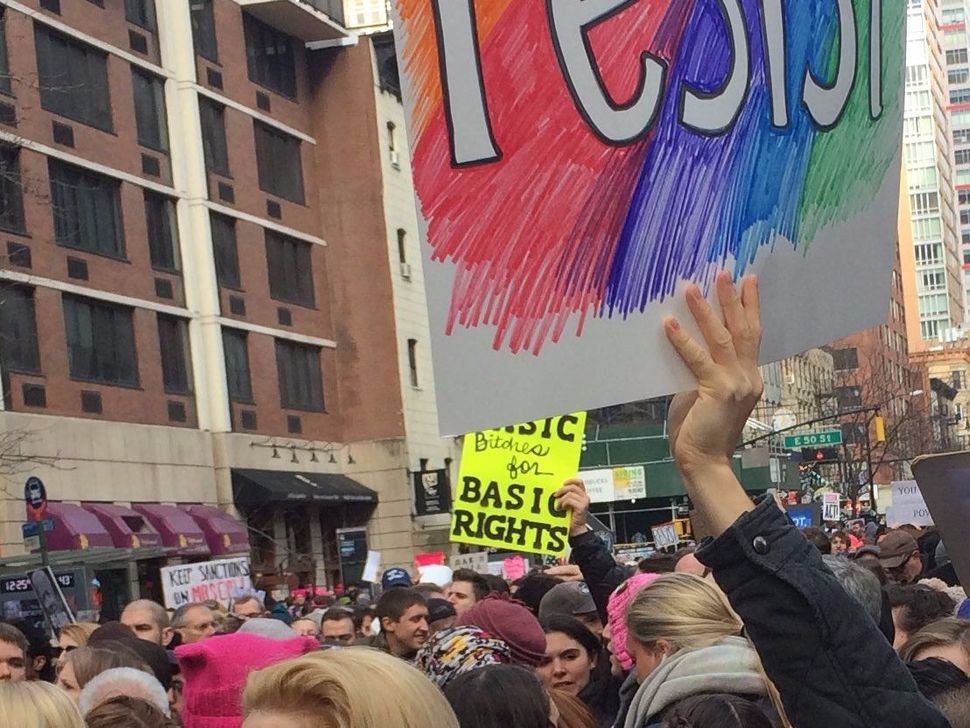 Guides circulated, prior to the Women’s March in D.C. and its satellites, on how to deal with dangerous situations, with potentially violent interactions with police. So I was relieved, when marching in New York, or, more accurately, when standing, immobile, in a crush of fellow humans in the middle of 2nd Avenue, and then marching in a slightly less suffocating crowd on 5th, to see that the police presence was minor and relaxed. At one point I even saw a police officer pick up a sign someone had dropped and offer it to (other?) protestors.

It was at around that moment that I started to feel a vibe that transcended non-violence (which is good) and veered off towards patronizing, which, hmm.

We can look at the police friendliness as straightforward evidence of, well, white privilege. While not all marchers were white, the march was very much coded White Lady. It wasn’t just that the marches were non-violent; non-violent marches with other demographics almost certainly do get a different reception. A 45-year-old white female Democrat wearing a knitted hat and holding an earnest sign urging everyone to get along (again, not a description of all marchers, so much as a projected vibe) is sort of the embodiment of… non-threatening. Women who have a sad that Hillary lost? Aww.

I will situate myself in all this: As someone who’s periodically the hated Jewess-du-jour of white supremacist websites, I’m well past being able to begin a sentence, ‘As a white woman…’, and don’t feel especially well-positioned to educate ‘my fellow white women’ on not supporting Trump, as if Trump-supporting white women care what a New York Jew like me thinks about this. But I long have and continue to go through day-to-day, offline life in the body of a white woman. Not the sort of white woman who meets all the white beauty standards. The sort who projects innocuousness. The empty seat next to me on public transportation is filled within moments. I do not look intimidating, which is why a man, on a surprisingly warm January day, lectured me at length on how I should put a jacket on my dog.

What I’m describing, to be clear, is not The Female Experience, and should not be spoken of as if it were. It is, however, a quality I share with millions of American women, most of whom don’t also have the, uh, educational experience of being racially hated by white supremacists. My physical presence strikes so little fear that it invites intrusion, even as I, personally, do not. To speak of this quality as “privilege” strikes me as imprecise: It’s a less dire form of misogyny than the ones interwoven with racism, particularly the variants that include physical violence. But it’s misogyny all the same. A less severe disadvantage, in other words, not an advantage.

Now let’s leave my physical person aside and return to the marches: What I witnessed was the center of Manhattan shut down by… mostly ladies, many in pink knit hats. Was this totes adorbs, heartwarming but apolitical? Was it a sign that the marches, with their oh-so-tragic inclusion of women who either don’t embrace far-left politics or do but don’t look the part, were ultimately too cozy to send anything but a generic message? Or was the sheer physical fact of all these women, all that pink, outnumbering the Inauguration ‘crowds’ and forming a worldwide movement, actually very political?

I’m reminded of a scene from The Battle of Algiers, in which Algerian women fighting (violently, in this case; the film is set during wartime) for independence, out the fact that white (or white-passing; there’s some hair-bleaching involved) women are viewed as innocuous to revolutionary purpose. Not because of any sort of one-to-one correspondence between those characters’ actions and the act of marching calmly through town while looking, as one sign aptly put it, “basic,” but as a reminder that we who elicit the aww of innocuousness can, and indeed just did, use that mistaken assumption to radical ends.

The Radical Innocuousness of the Women’s March