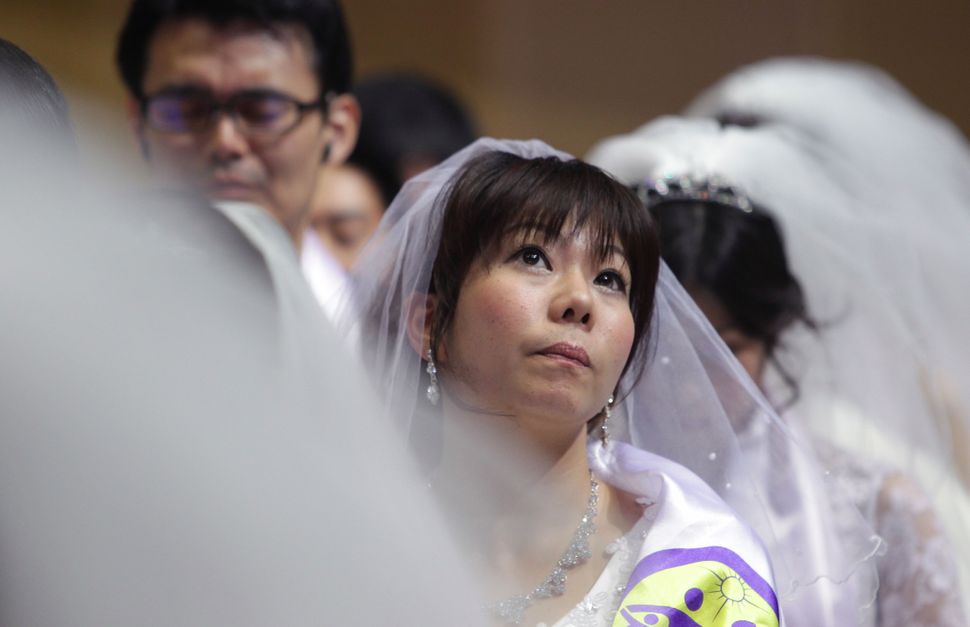 A bride in South Korea. Image by Getty Images

“I know a great guy for you,” wasn’t what I had expected to hear the first time I met my language partner over coffee on a frigid winter day in Seoul. But it was something I got used to pretty quickly when I studied abroad in South Korea at 21.

After growing up hearing about the “shidduch crisis,” Orthodox Judaism’s panic over an abundance of eligible women and few ready-to-wed men of similar religiosity, being asked out left and right (always on behalf of somebody else) was quite flattering even though my religious beliefs and personal values keep me from dating outside of the Jewish community. And, after a few years of dating in New York City and fondly reminiscing about my 2013 stint in Seoul, I recognized that South Korea’s pragmatic approach to dating was something all couple-centric cultures could appreciate. And also happened to be something that my particular community could potentially use to revitalize the stagnant feel of being in the NYC Jewish meat market.

As a Modern Orthodox Jew from the suburbs of New York City, there was hardly a moment since in my life that I wasn’t cognizant of the idea that I’d get married to a nice Jewish guy, likely of the same religious and ethnic (Ashkenazi) background. Going to study abroad in South Korea meant that I’d be taking a six-month hiatus from dating, which seemed like a small price to pay in order to explore another country and its culture. I was more concerned when I left New York that I’d starve, considering that there’s little kosher food in South Korea, than that I’d be fending off matchmakers at every turn. But I quickly learned that if you’re young, intelligent, and single, people in Korea, both Korean and foreign expats, are sure to have The Perfect Person for you.

How, when lifelong friends, Jswipe, Saw You at Sinai, matchmakers, and college roommate’s now-husbands couldn’t, did these strangers have The One for me? How was every street corner in Seoul (at least in the college neighborhoods) flooded with couples? Each of my friends in Seoul told me of the pressure to date, something I could relate to. But while in New York dating is more or less a natural extension of general life, South Korea’s made it a lifestyle.

Korean society is community-based, much like Judaism, and, like Orthodox Judaism, South Korean society is focused on the family unit and, as my grandmother says, getting together and having babies. (This appears to be regardless of religious practices: More than half of Koreans don’t actively practice anything or follow local shamanic beliefs, while Christianity is the largest religion in South Korea, followed by Buddhism and then Catholicism.) On a college campus, not being in a couple, or at the very least walking with a group of friends, was almost sanctimonious: coupling up just seemed to be how South Korea does it.

Some of this abundance of couples could be explained by South Korea’s government, which has historically funded dating events and organizations due to failing birth rates. Like Jews, there’s an existential threat to South Koreans: As some Koreans see it, they’re the first race in modern human history expected to go extinct due to a failure to procreate. South Korea has around 800 years to worry about its lack of baby making, according to a 2014 report from the country’s National Assembly Research Service. Others, including NBC, saw the research as South Korea’s government trying to raise panic to promote birth rates and traditional forms of marriage.

It became apparent to me that it didn’t matter whether I was set up with My Happily Ever After Soulmate or not, just as long as I was actively Dating. The fact that I stayed adamant about not dating throughout my time in Seoul hurt many a friend of mine’s heart. Mostly because it meant they had one less potential friend to set up. Essentially, less importantly than finding The One, dating culture in South Korea is about getting out there. It sounds simple, but somehow radically different from the more laissez-faire often exhibited in the dating spheres in NYC: Synagogue mixers, Sabbath meals, friend’s birthdays, house parties, waiting for someone or some website to send you a match… There’s a whole lot of waiting in the community I’m part of. And that wasn’t necessarily the case in South Korea.

How do they do it exactly? Actively. Getting out there seems like a big deal for the smartphone generation, but if tech-obsessed Korea can do it anyone can. It’s just a matter of changing the mindset from one of searching to one of being available.

Although I never went on one of the aforementioned offered dates, It turned out that I was being asked to participate in a Sogaeting (소개팅) or a Meeting (미팅). While the latter seems like it should mean something you schedule in Outlook, it is in fact a group date when two people, often but not necessarily a couple, bring their friends together. Each brings three or four single friends of different sexes, often to a cafe or a bar, and they simply hang out. The intention is blatant and if it goes further between any two people, that’s great. If not, it was a fun few hours and a chance to meet people you may not otherwise ever interact with. Aside from willingness on all participants’ parts, there’s little concern about a pair of people not hitting it off because it’s the fact that people are getting out there that is important. Finding love is great, but showing a desire to do so is the way to get things done.

Sogaeting, meanwhile, is similar but slightly different. While it’s also a casual introduction facilitated by friends, it’s typically one-on-one rather than in a group. The two arranging the Sogaeting stay for a bit to do introductions and then depart. If the couple likes one another, they can go out or not. It’s no strings attached, no expectation blind dating and necessitates only that there is a willingness from the daters to meet someone who they may potentially go out with.

This casualness towards dating itself is what Jewish daters could learn from: It’s not just about hooking up or getting married, but showing openness. Treating dating as a societal pastime rather than a tool to lead to bigger and better things (usually marriage) is fine for some people, but some others just want to have another person to call up and go out with: It doesn’t have to be The One but The One Who Could Be The One. Meetings and Sogaetings don’t only introduce potential couples, but also to potential friends. It didn’t seem to be, at the end of the day, about setting up two people who should be on dates with one another as much as having people go on as many dates as possible because the more people you encounter, the higher a chance that you could find a potential partner.

There are, of course, people who meet even more casually, maybe hanging around the indie music and club scene in the Hongdae neighborhood, or more formally through matchmaking agencies, individuals, apps, and websites. But it appeared to this casual voyeur that a proactive approach was the key when it came to South Korean dating and could certainly be something young Jews could learn a thing or two about.

Tamar Herman is a NYC-based pop culture writer who has work featured in Billboard, NBC News, the Village Voice, and numerous other outlets. She can most easily be reached on Twitter @tamar__herman, where she’s likely tweeting about K-pop and politics.