An Open Letter to Ivanka Trump, From One Jewish Mother to Another 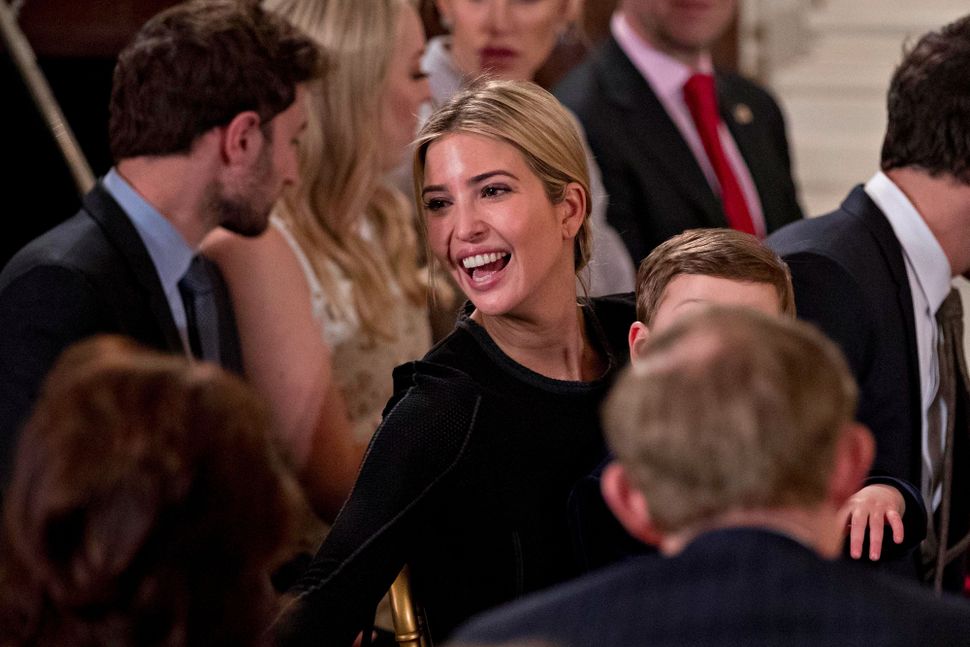 I’ve been wanting to write. It’s been almost two weeks since you became our first Jewish first daughter, but as a fellow Jewish mother I thought I’d wait until the kids and nanny were settled into your lovel, new D.C. home and Arabella was adjusted at Jewish Primary Day School. JPDS sounds like a no-brainer! What more could we want for our children — or the kids of America, for that matter — than a school that, according to its website, is intent on “fostering a deep sense of mutual respect and pluralism” in “compassionate” students?

I have to say, you remind me of one of my closest friends – another East Coast prep school blonde who converted to Judaism (after she fell in love with a fellow med student at Yale). I remember how intensely she studied the laws and traditions of the Torah – all of those stories and holidays and prayers — for her conversion. The only way in was to be all-in. By all accounts you were, too, picking the Hebrew name Yael (“God’s strength”) and impressing the tough, three-rabbi panel known as a beit din, along with your devout Kushner in-laws.

I, on the other hand, have nonpracticing Presbyterian in-laws. Shabbat at my house is better known as “pizza night,” and pepperoni is permitted. We don’t shut off our phones or refrain from using transportation like you and Jared do – unless you’ve got a special rabbinical pass for inaugural balls. Correct me if I’m wrong, but isn’t the Pikuach Nefesh supposed to be invoked when one’s life is in danger? For example, if you had to jump in a car von Trapp-style to escape the Nazis and it happened to be after sundown on a Friday?

There I go. Observant or not, it never takes long for us Jews to reference the Shoah, does it? As a kid I sometimes pretended to be Anne Frank in our attic crawl space. I’d bring a composition notebook into a dim corner and scribble away as quietly as possible. I guess this kind of imaginative play is expected when your parents take you to visit gas chambers while you’re still in elementary school. “The world stood by and let this happen,” my father told me outside a crematorium in France.

Somehow, even my 10-year-old mind connected that afternoon at Struthof to Bounn Hong, a refugee who escaped through the jungles of Laos and cleaned our house while she learned English and saved up for cosmetology school. Hers was the shared story of my ancestors who fled pogroms in Poland and of your husband’s survivor grandparents. I haven’t committed many biblical quotes to my mostly secular memory, but I do know this one: We were all strangers in Egypt.

I’m guessing you’re pretty aware that the fact your dad’s Muslim ban was decreed on Holocaust Remembrance Day struck a ton of American Jews as egregious. Some said the timing was purposeful – kind of like the weird omission of the word “Jew” and the number “6 million” from the Remembrance Day statement.

I’ve heard you’re well aware that the internet scoffed when, after the sun fell last Saturday, you powered up Instagram and shared yourself in that shiny silver dress en route to the Alfalfa Club (an organization so frivolous, it was named after a plant that “can’t get enough to drink”). The problem was, what with the detentions and protests unfolding, your image bore the image of indifference, the kind of indifference Elie Wiesel meant when he wrote, “The opposite of love is not hate, it’s indifference.”

Ivanka, mom to mom, citizen to citizen, me (Reform Jew) to you (Modern Orothodox Jew), I am writing today to ask for a sign. Send me a sign that you are not, in fact, indifferent. That when you see a photo of a dead Syrian toddler washed up on a Greek beach you share my visceral understanding: He could be my child. That you subscribe to the Talmud’s teaching “[S]he who saves one life, saves the world,” along with Hillel’s question you tweeted in September: “If not me, who? If not now, when?”

Because I do want to believe – to paraphrase JPDS Head of School and Argentine immigrant Naomi Reem’ message – you’ve moved to Washington intending to harness the creativity you’ve shown in business, your Ivy League education and Jewish moral values for tikkun olam repair of the world. Because, Ivanka-Yael-first-Jewish-first-daughter, no Jewish American woman who works has ever been more powerfully positioned to help repair the present moment than you.

An Open Letter to Ivanka Trump, From One Jewish Mother to Another