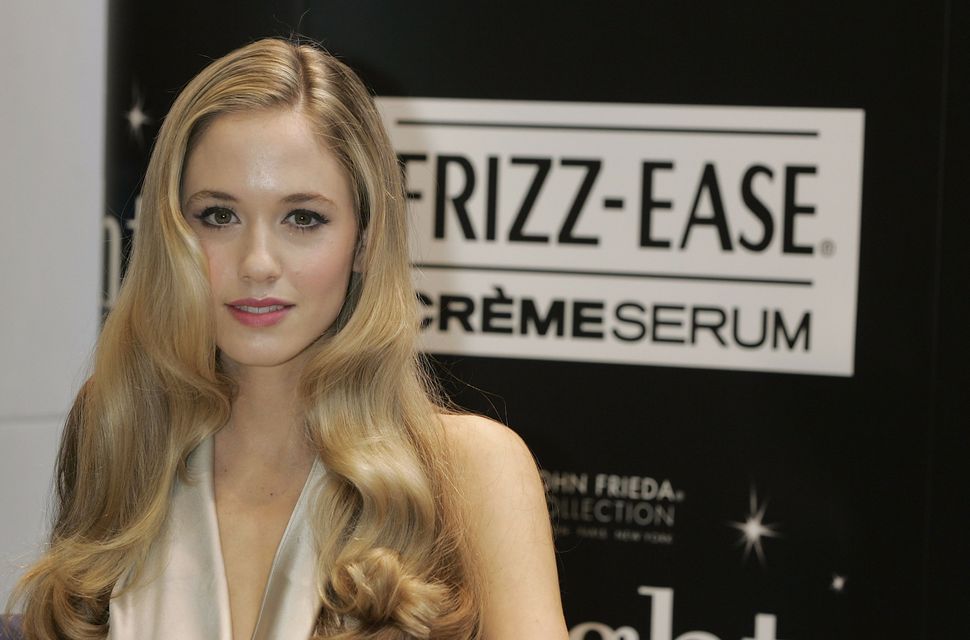 Frizz-Ease, the product that promises smoothness. Image by Getty Images

Yes, of course, of course, when I saw the headline, “My Lifelong Frizz-Ease Addiction: How I became convinced my hair wasn’t curly, it was defective,” I clicked. I clicked the provincial click of someone who knows that product (and its tendency to ooze over everything else in a bag) all too well.

Emily Anne Epstein’s great new Atlantic essay does not end where you think it will, namely with a natural-hair epiphany. As someone still flat-ironing my hair (but with Tsubaki oil rather than Frizz-Ease these days), this despite various product experimentations and a Tel Aviv haircut I was convinced would solve everything but wound up being quite possibly the least flattering haircut I’d ever gotten*, I kept waiting for the part where I learned about the miracle… product? moment of authentic enlightenment? that solved Epstein’s own hair issues. The essay instead ends on a keratin-treatment confession:

“Eventually, I gave up. I wear it straight now, even though I know that makes me a traitor. My curly hair was defiant, political, wild—an expression of my true self. My straight locks are a reminder that I’ve succumbed to societal norms, that Frizz-Ease, and all it represented, finally won.”

Whenever I read an essay along these lines, outside the Jewish press, I’m struck by the unstated or barely-stated Jewish angle that’s so often present. Epstein refers to the “impossibly sleek and angled hairdo that was the essential bat-mitzvah look among my peers,” and then mentions that the women in her family all have “big, bouncy, Jewish hair.” But she keeps the terms universal, as though “a limbo of not-quite-curly, not-quite-straight hair” is similarly fraught for all women with the hair type in question. And I’m not so sure it is. There are of course plenty of non-Jewish women whose hair meets that description. But the sickness metaphor throughout Epstein’s piece (“I didn’t have curly hair, I had frizz”; “All the other women in my family suffered from this same illness”) strikes me as… specific.

From the outside, Epstein’s essay might read as a white woman’s grass-is-greener hair complaint. To get at why it isn’t (just) that, the expression ‘racialized anti-Semitism’ seems necessary. What I could relate to most in the piece was an unstated, implicit angle: the ongoing, childhood-long confusion, mixed with shame, over why, despite being white, the “normal hair” section clearly does not have you in mind.

The Jewish hair question isn’t just about hair. It represents the awkward place of anti-Semitism in American Jewish life. To talk about “Jewish hair” is to assert that such a thing exists, which is (shouldn’t be, but is) understood to exclude all the Jewish women without that hair type… but which is also to use the expression “that hair type,” one that makes clear there is a hair type that comes to mind, one shared by many American Jewish women (including yours truly), and which others in and outside the Jewish community regularly identify as “Jewish.”

But even if that much is established — that there’s such a thing as Jewish hair (albeit not a hair type possessed by all Jewish women, or only), and it has negative connotations and causes a great deal of stress and distress — there’s an understandable wariness about even mentioning this, as though to speak of Jewish hair politics, in the US, is to suggest that these are anything approaching black hair politics. As though to speak of one is, by definition, to erase the other. I often think of Marjorie Ingall’s Tablet story from a couple years ago, where she wrote, “even though Jewish women talk and fret and occasionally make art about our hair, it’s simply not as complicated and loaded a subject — nor as intricately braided into our identity — as it is for black women in America today.” This strikes me as right, but also not quite reason to drop the subject entirely. Anti-Semitism is not the form of bigotry in America, now or ever, but it’s a big one. It’s not dismissing the others to include it among the bigotries one combats.

*Too much metaphor? But it’s the truth!