The Joys Of Seder At The Diner 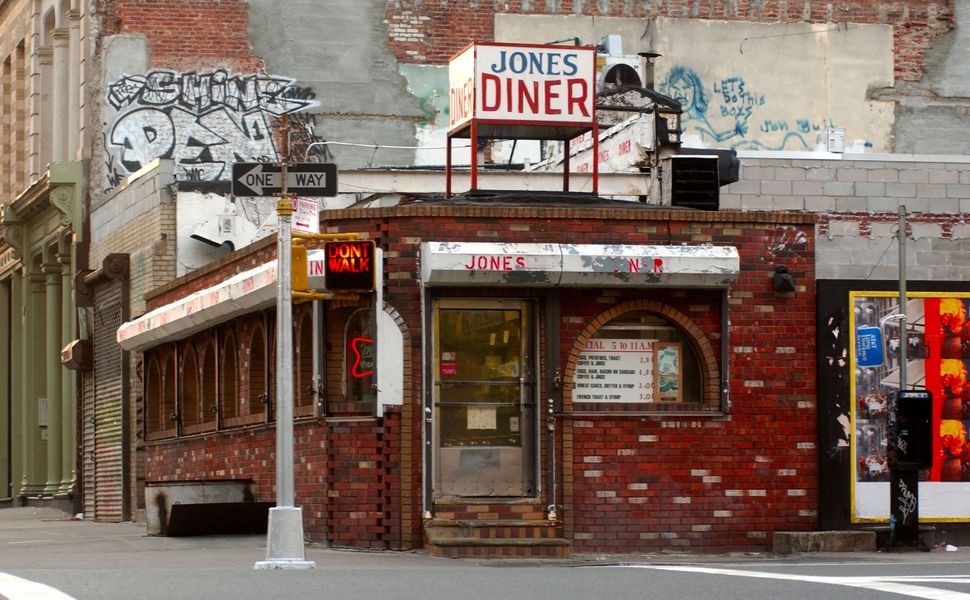 A stapled Haggadah started it all.

In spring of 2010, I attended a Seder where the Haggadah was unbound, its pages stapled together. It had been crafted by three Reform temples, as its front page stated, and released in April of 1974; and its language was a poignant reflection of its era. “Our ancestors suffered the coldness of hate,” the Haggadah read, “and dreamed of the warmth of human kindness and love.” And: “We raise our third cup of wine and offer tribute to the universal spirit within all that gives us life.” I asked my hosts if I could take the Xeroxed Haggadah home, and they kindly said yes.

Some friends had expressed interest in a Seder, and I’d thought it would be meaningful to lead one. Now I had a lovely Haggadah, of which I could easily make copies. We set a date for a few nights later, and “Seder in a diner” was born.

Why a diner? That’s easy: New York diners serve matzah ball soup. But they’re also relatively affordable and laid-back. Many have ample seating. And since diners aren’t trendy, they’re not prone to impatient customers waiting for your table, or a staff eager to move you out the door.

Beyond that, this setting allows for so much flexibility. With a little research, I can find a diner that’s convenient and has space for all who want to be there. No one must spend two days shopping and a week cooking. People can order what they’d like to eat; and I can concentrate on leading the Seder and enjoying the guests, without running constantly to the kitchen.

Of course, diners have not been purged of chametz. These Seders won’t suit the most strictly observant. But they’ve brought me a lot of joy and fulfillment, and they’ve deepened my relationship to Passover.

My friends Jen and Kerry — both regular churchgoers who’d never attended a Seder — were my guests the first year. We chose a diner on the Upper East Side. The staff was helpful and even enthusiastic when we explained what we’d be doing, and they helped assemble items for the Seder plate. The hardest to figure out was the shank bone; in the end, I think we settled on a chicken leg. (Since then I’ve moved to bone-shaped dog treats, to be taken home by a dog-owning attendee at night’s end.) Applesauce with cinnamon does fine for charoset.

I couldn’t have hoped for better participants. Kerry and Jen read the Haggadah, asked questions, shared their perceptions, and didn’t doubt my gathering’s authenticity when a well-meaning server gave us bread rolls. They explored the holiday with open hearts and emboldened me to make diner Seders a tradition.

I think back on the people who’ve attended — Lisa, a friend since high school; my cousin Adena, visiting New York for a few days on her way to Turkey for vacation. I remember a laughter-filled Seder with Robin and Bill, before they moved to L.A., before the cancer Bill had had came back. I was thrilled when Judy was able to attend. Her late wife, Vielka, was the one of the couple that I’d known better; but Judy’s presence told me she’d remain in my life. Last year my father came to participate, just as I’ve taken part in his Seders over many years.

Bonds have been strengthened at my diner Seder table; friendships have begun. And this year, it looks like I’m going to need a ton of seating: RSVPs are up to about 20. Jan has a song she wants to introduce. Sam plans to travel in from Philly and attend with her sister.

“We celebrate in kinship the love and faith that give life,” says my Haggadah. I’m ready; everyone is welcome.

The Joys Of Seder At The Diner