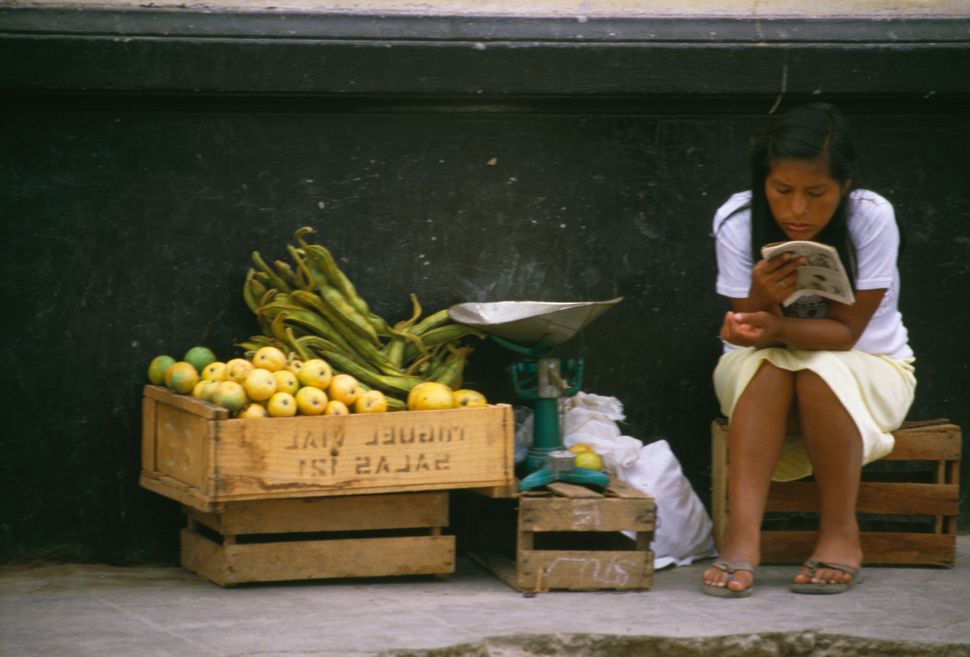 Prolific children’s author Monica Brown’s new “Lola Levine” series aimed at children aged 7 to 9, featuring five books so far, is earning enthusiastic reviews and reader responses. Each story, complemented by black-and-white drawings by illustrator Angela Domínguez, explores the challenges faced by a bookish and athletic young heroine of Peruvian and North American Jewish heritage. Like Lola, Brown grew up in a family of Spanish and English speakers, her mother is Peruvian Catholic and her father is Jewish North American. Although both Kirkus Reviews and School Library Journal refer to Lola as “half-Peruvian and half-Jewish,” as if one could not be both Peruvian and Jewish, Brown has repeatedly testified to her vision of an America without such divisive distinctions. In a Kirkus Reviews interview last year, Brown emphasized that she strives to reflect a world where “multiracial and multicultural children are not considered ‘fractions;” she spoke movingly of the need to create characters with whom all children can identify.

Brown has written several children’s books exploring South American culture, full of historical detail and an innovative mix of Spanish and English. Yet in the “Lola Levine” series, the Jewish part of Lola’s background remains elusive. The first chapter of “Lola Levine Is Not Mean” is entitled “Hello, Good-Bye, and Peace,” and her diary entries conclude with “Shalom.” This is almost the only Hebrew word (or word in any Jewish language) she uses. While Lola’s mother speaks Spanish as her first language and Lola strives to use the language as well, her artist dad’s cultural contribution to the family is bringing bagels to breakfast (from the inauspiciously named “Biff’s Bagels”). He is supportive and loving, but he does not continue ethnic traditions the way her Peruvian relatives do.

The closest to a Jewish experience which Monica relates is Friday night dinner at her home, when her family “welcome(s) the weekend,” with “matzo ball soup, Peruvian chicken, and flan.” It is not the lack of a religious component that makes this meal seem inauthentic, but rather the disembodied Jewish food item, served without any description of family memory or tradition. Elsewhere Lola is delighted by other foods identified in Spanish and explained: ice cream made from the Andean fruit lúcuma, butifarras ham and vegetable sandwiches, and even a bowl of mangos literally glowing with color, and labeled “GROWN IN PERU.”

The most recent book in the series, “Lola Levine and the Vacation Dream”, offers a richly detailed immersion in Peruvian culture, including descriptions of the archeological ruins of Pachacamac and the history of Peruvian soccer. Lola’s aunt informs her about the destruction of the native peoples of Peru by the Spaniards, but reassures her that “indigenous people are strong,” and have survived. Lola learns through direct and intense experiences that “We’re smart and creative people… and I feel proud that I am Peruvian.”

So who connects Lola to the Jewish people? Her father’s mother, whom Lola refers to as “Grandma,” but addresses as Bubbie. Bubbie does not speak Yiddish or cook Jewish dishes. She is flamboyant and loud. She alone calls Lola “Lola Esther” and reminds her that she is descended from “drama queens.” The qualities Lola shares with her grandmother are personal, not overtly cultural. In a rare glimpse of family conflict in the book, Lola’s mom asks her husband why his mother is so “dramatic.” Perhaps the reader is supposed to infer that Jewish women are loud and enjoy being in the spotlight, but it is doubtful that Lola’s young fans would make such a connection. Lola also has a nemesis, mean girl Alyssa Goldstein, and a best male friend, Josh Blot. While Goldstein is immediately identifiable as Jewish, Blot seems to echo the common Jewish name “Blatt,” converted into a Borscht-Belt pun suggesting that his ethnicity has been “blotted out” of the picture.

Given the apparent success of this series, and the breadth of Brown’s talent and vision, it would be nice to see Lola in more Jewish cultural situations. Perhaps she could meet more members of her extended Jewish family, visit Israel, join a Jewish social justice group, or take a kid’s Yiddish class. Even if the thoroughly assimilated character of Lola’s Jewish family is plausible, the parallel description of exuberant pride in the other half of her heritage makes the pale trace of anything Jewish conspicuous by its absence.

Emily Schneider is a writer and Jewish educator in New York City. She has written about children’s literature, Jewish culture and history at Tablet, Jewcy and “Family Reading” at The Hornbook.