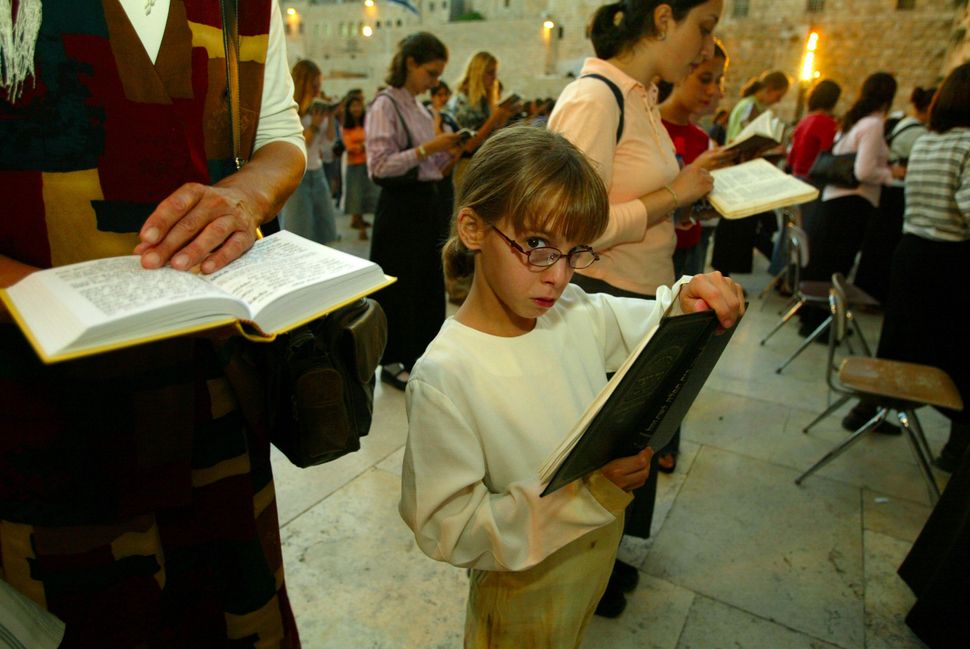 A girl prays at the Western Wall Image by Getty Images

In Jewish ritual life, not everyone is a leader, but everyone has a role. Traditionally, that role has been circumscribed for women, but a growing number of children’s picture books have sought to expand its norms, depicting women as rabbis, cantors, and other figures of authority. From Mindy Avra Portnoy and Steffi Karen Rubin’s “Ima On The Bima” (1986), to “New Year At The Pier,” by April Halprin and Stéphane Jorisch (2009), these books assure children that women can fully assume leadership roles formerly restricted to men. In author Lori S. Kline and illustrator Susan Simon’s “Almost A Minyan” (Sociosights Press, 2017), the emphasis is different: girls attaining the age of Jewish adulthood are seen participating without restriction in daily communal prayer.

An unnamed girl is the central character in this rhyming narrative; the simplicity of the language and tone imply that the book is more appropriate for readers younger than the character herself. We are not told the girl’s age, but she is apparently approaching religious adulthood, perhaps twelve or thirteen. The location is not specified, and nor is the affiliation of the shul she attends in her small town.

The book’s protagonist observes her father attending daily minyan, but the death of her grandfather changes the cheerful morning routine to one of grief, even perhaps depression. Her previously smiling father is depicted as hunched over and uncommunicative; even the tallis bag which he totes under his arm looks like a burden. The girl intuits that, for now, the support of their community cannot assuage his loss: “The next several weeks, well, they seemed rather odd; Papa would pass me, and not even nod.” Finally, her father asks her to accompany him to pray one morning, and passes on to her his own father’s tallis and tefillin. It seems that she has not been actively prepared for this obligation: “And so we lay tefillin, my Papa and I./At first it was tricky and I felt quite shy.”

The book includes many characters of color, which is still relatively unusual in Jewish children’s books. This unremarked diversity is thoroughly welcome, as it assumes that the child absorbing the lesson of the story will accept this aspect of it without concern. The small town has only one shul, and the father is a shopkeeper, both of which lends the story a sort of timeless quality, as does the fact that not just the girl but all of the characters remain unnamed.

There is much left unsaid in this book, which may encourage either identification or skepticism from the adults reading it to a child. What type of Jewish education has the girl received, since she seems unfamiliar with the ritual of “laying tefillin,” apart from having watched others enacting it? When her father announces that she is ready to “make the minyan,” the girl is surprised, until he explains that she has been an adult since her Hebrew birthday. Why is she unaware of this milestone? Again, while this omission may seem incongruent to an adult, it could be part of the author’s choice to narrate this coming-of-age story as a fable with few specific details.

While young children invariably respond to rhyme, an adult reader may be ambivalent about Kline’s choices. After all, “siddur” does rhyme with “glitter,” and “minyan,” with “opinion,” but these pairs may seem forced. Similarly, the illustration style features generic and exaggerated expressions, with large tears appearing on cheeks, and an older woman whose friendly pinching of the girl’s face looks painful. On the last page, the girl’s father makes a prominent “thumbs up” sign in her direction. This didactic signal of approval substitutes for a more nuanced example of his pride in her role. More successful are the seasonal changes in the pictures, which complement the personal development of the main characters. The end papers are the blue and white folds of a tallis, and the center illustration frames father and daughter in a border of the same tallis, including cameos of the zayde, whose memory has been internalized by the young girl.

“Almost A Minyan” merits attention for the gap it attempts to fill, constructing a children’s picture book which takes as its assumption the right and the obligation for women to be counted in Jewish ritual, including the central one of individual and communal mourning. Yet the undifferentiated qualities of the characters, along with the bland and repetitive illustrations, fail to do justice to its theme. Children identify with tangible situations developed through detailed and individual words and images. The specifics of the characters’ lives need not parallel the child’s own experiences in order for her to identify with them. Kline and Simon have created a work that, for all its strengths, relies too heavily on the undeniable value of its message.

Emily Schneider is a writer and Jewish educator in New York City. She has written about children’s literature, Jewish culture and history at Tablet, Jewcy and “Family Reading” at The Hornbook.