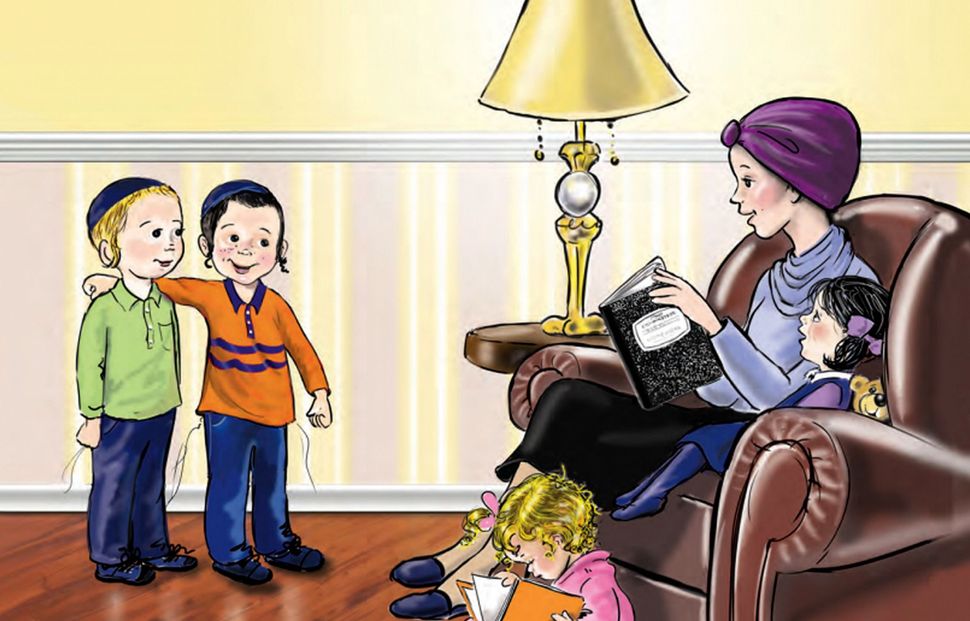 An illustration from “Zai Gezunt”, written by Bracha Goetz, illustrated by Tova Leff and published by Artsscroll. Image by Tova Leff

If you walk into Monsey’s Evergreen kosher supermarket, somewhere among the extensive schnitzel varieties and Shabbos candy treats, you’ll see a single children’s book for sale.

Zai Gezunt! is the Yiddish translation of Artscroll’s Let’s Stay Safe, written by Bracha Goetz and illustrated by Tova Leff, a picture book that talks about children’s safety of all kinds: crossing the road, fire emergencies, bicycle caution. But couched in between these subjects, one finds several pages devoted to the importance of personal space, of staying away from strangers, and of informing an adult when anyone – a relative, a teacher, a stranger – comes dangerously, inappropriately, close.

Published as a joint venture between Orthodox publishing giant Artscroll and the Karasick Child Safety Initiative of The Center for Jewish Family Life/Project YES, the book project was spearheaded by Monsey’s Rabbi Yakov Horowitz, dean of Yeshiva Darchei Noam.

“Safety education is so important because abusers self-select,” Horowitz says. “Their nightmare is a kid who is educated about personal space. They look for the kids who don’t know – they groom victims. Once a child knows that no one is supposed to touch them, they react, they project it very quickly.”

The original English version of the children’s book, first published in 2011, featured an ultra-Orthodox Lithuanian family – a mother in a wig, a father in a white shirt and black pants, a suburban house that could easily be in Lakewood, New Jersey.

But the Yiddish version, released in 2013, not only translated the text – the illustrations went through a rigorous translation, too. Here, the family is clearly Hasidic – a mother in a headscarf in the home, a father in a black vest and exposed tzitzis, a Brooklyn brownstone, perhaps in Williamsburg.

“Our goal as an organization was to take every barrier away from homes,” Horowitz said. “Modesty was really important here. If the imagery was not congruent to the community’s standards, it could be a barrier.”

Goetz is a popular Orthodox children’s writer who had tried to find a publisher for the book for years, to no avail.

“When I raised my children, I taught them about stranger danger, but I was unaware that most children are molested by people they know,” she says. “When my own family was effected by sexual abuse, one of my children begged me to use my children’s book writing abilities to write a book designed for Orthodox children, which could help prevent Orthodox children from being molested…but no publisher was interested. When I sent my manuscript to Rabbi Horowitz, he was very interested in helping to get it published…I wrote the book in a sensitive and careful way, so that it would be able to be helpful in every Orthodox home.”

The English book, Horowitz estimates, has hit half of English-speaking Orthodox homes, and Horowitz is now working hard to distribute the Yiddish book throughout the Hasidic world, too. 60,000 copies have been sold or distributed. The book is sold in Monsey groceries at a discounted price; in Baltimore, the book is given for free to all parents who sign a pledge to read it with their children, and already 1,500 have been distributed throughout the ultra-Orthodox community there. New distribution projects, working with local donors, are being introduced throughout Brooklyn’s Hasidic community now. Horowitz has led awareness workshops for parents in the Skver Hasidic enclave of New Square, NY; in Monroe, New York, Satmar Hasidic schools have already bought 2,000 copies and distributed them to families for free.

And it’s working. In one yeshiva day school on the West coast, “Let’s Stay Safe” was read to the students, and two six-year old girls came forward saying their rebbe touched them on multiple occasions. The teacher was swiftly dismissed and charged on child molestation. Horowitz says his organization is inundated with letters from parents and occasionally children who have prevented abuse, or who have shed light on previous experiences and sought help because they read the book.

“Research shows that with just one conversation, with a little follow-up, a kid is five to six times more likely to defend himself,” Horowitz says. “We worked with psychologists and rabbis on this, Dr. David Pelcovitz and Rabbi Dr. Abraham Twersky. We wanted the parents to be able to sit on the couch and read it to their children while they were relaxed and comfortable, so that the conversation is not anxiety-inducing.”

Notably, the book includes illustrations of women, both mothers and daughters – something which has become a rarity in children’s books marketed to the ultra-Orthodox.

When I mention this to Horowitz, he laughs, as if he was waiting for me to point this out. “We had discussions with Hasidic community leaders about the women’s images, and I said, this has got to be there, because it has to be real, and real life has mothers and daughters. It’s pikuach nefesh [an issue of self-preservation]…Everything is negotiable, but this. It’s untenable to produce something that the children don’t have in their real lives. And the rabbis nodded immediately.”

“I try to be an agent for change,” he tells me. “I am a little provocative, but I don’t throw stones, I don’t do it in a way that’s confrontational, I sit down with the rabbinic leaders.”

Watch Horowitz’s instruction video for Orthodox parents about how to talk to children about abuse prevention here: