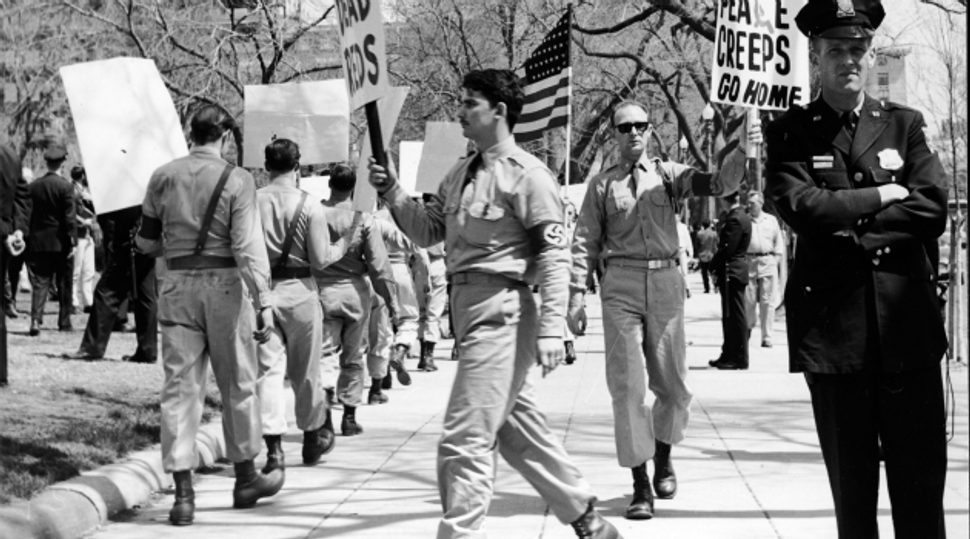 While watching the recent events in Charlottesville, Virginia – the violence that erupted between marching neo-Nazis and Antifa protesters – I can’t help but think back to what was the original “Antifa”, a group of Jews, whom my father told me about from his childhood, growing up as a poor Jewish kid in Newark, New Jersey.

My father was born in 1904 in what was then Kishinev, Russia, and what is now Chisinau, Moldova. Before he was a year old, his family immigrated to the US. Like many Jewish families at the time, they were fleeing the murderous atmosphere created by the Kishinev pogrom of 1903. My dad grew up in the tenements of Newark, without much money but with a wealth of stories about the characters and goings on of the Jewish neighborhoods of Newark of that era.

The Antifa’s role in fighting Nazis in the streets reminded me of my dad’s story about his much beloved but “kind of crooked” first cousin, Jake “Cocky Jake” (and sometimes, “Jack”) Rothseid.

Cocky Jake was the black sheep of the family, a guy who was connected with the Jewish mob that ran Newark in the 1930’s. It wasn’t that Jake was a hit man who ran around killing people; he wasn’t exactly Bugsy Siegel, Meyer Lansky, or Dutch Schultz. He was more like the local neighborhood wise guy. He was the guy who knew a guy who knew another guy who could get things “taken care of” when legal remedies were not feasible.

My father always told me that the only time his family was ever really proud of Jake, given his line of work, was when they heard that he’d been involved with busting up pro-Nazi rallies in Newark that were taking place shortly prior to US entry into World War II.

In the late 1930’s, there was a legal pro-Nazi movement called the German-American Bund. The Bund started having large rallies in North Jersey and elsewhere, with the goal of keeping the US from entering World War II on the side of the allies. Most Americans of the time were deeply isolationist. The last thing they wanted to do was send American boys to fight and die in another European war. So the Bund’s activities were not that surprising, and found fertile ground in many quarters. But the local Jewish population was alarmed by the pro-Nazi rhetoric of the Bund, not to mention the sight of brown-shirted activists chanting and sharing Nazi salutes right here in the good old USA.

The leading lights of the Jewish community asked the local police and Sherriff’s offices to stop these gatherings, but, getting no help, decided to raise the matter to a higher authority. They appealed for protection to the Jewish mob boss of Newark, Abner “Longie” Zwillman. Zwillman agreed to help. He had his chief enforcer, ex-prize fighter Sidney Nathan Abramowitz (better known as “Nat Arno”, the name by which he is immortalized in the New Jersey Boxing Hall of Fame) organize a “civil rights group”, which they called “the Minutemen.” 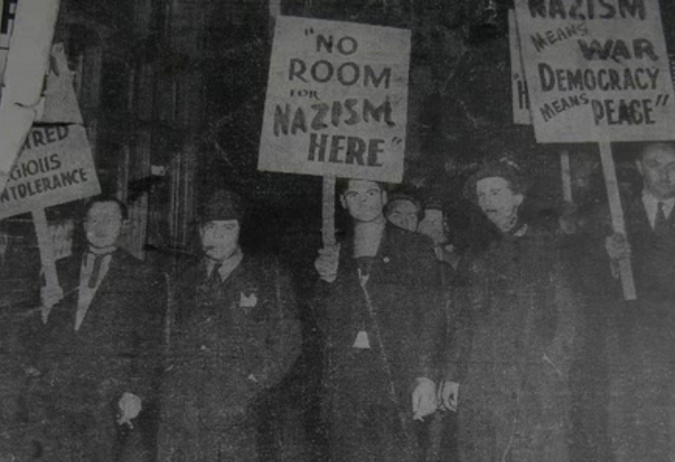 The Minutemen, a Jewish anti-Fascist group active in the 1930’s. The author’s cousin, Jake Rothseid, stands on the far left, holding a picket sign and a cigar. Image by Courtesy of Mark Williams

My cousin Cocky Jake was a card-carrying member of the Minutemen, and his picture appears in newspaper accounts of the day. The Minutemen were essentially an armed group of Jewish mobsters, thugs, and wise guys like Jake. When Nat Arno gave the word that the Nazis were assembling, these denizens of the saloons, pool halls and other dens of iniquity in North Jersey would leave their usual haunts and head to the Nazi rallies. Much like today’s Antifa, the Minutemen’s preferred tools of persuasion were not logic and reason, but baseball bats, brass knuckles, rubber coated pipes and the occasional stink bomb.

The Minutemen were largely successful. Most of these pro-Nazi rallies were broken up before they got started. And the Nazis managed to get away with just a few broken bones and bruises, as Longie had decreed that no one was to be killed during these events.

Immediately after Pearl Harbor, these pro-Nazi organizations were declared illegal, and the Minutemen were able to disband and return to their usual less-than-savory activities. Years later, it was discovered that the German American Bund organizations of the time were not purely local in nature; according to an investigation by the House Un-American Activities Committee, chaired by Martin Dies, there was clear evidence that the Bund had ties to the Third Reich.

My father is long gone, as are Cocky Jake and his friends in the Minutemen, Longie Zwillman, and the rest of the characters that ran the Jewish mob in Newark back then.

Unfortunately, it seems that the Nazis are still around, but then, so are the people resisting them on the streets. I wonder if the members of today’s Antifa would be surprised to learn that they are replicating a proud lineage of Jewish gangsters who, years ago, took a brief respite from the rackets and the pool halls to do some good for a change.

I’m not sure if there’s a heaven for wise guys. Even if there is, my guess is they’d have to check their baseball bats and brass knuckles at the door. But I like to think that somewhere, Cocky Jake is looking down at all this and thinking, “Give ‘em one for me, kid.”

Mark B. Williams is the Chief Strategy Officer for the Knight Cancer Institute of Oregon Health & Science University in Portland, Oregon. He is also the Honorary Consul for the Republic of Moldova for the State of Oregon. He lives in Portland with his wife and daughter.