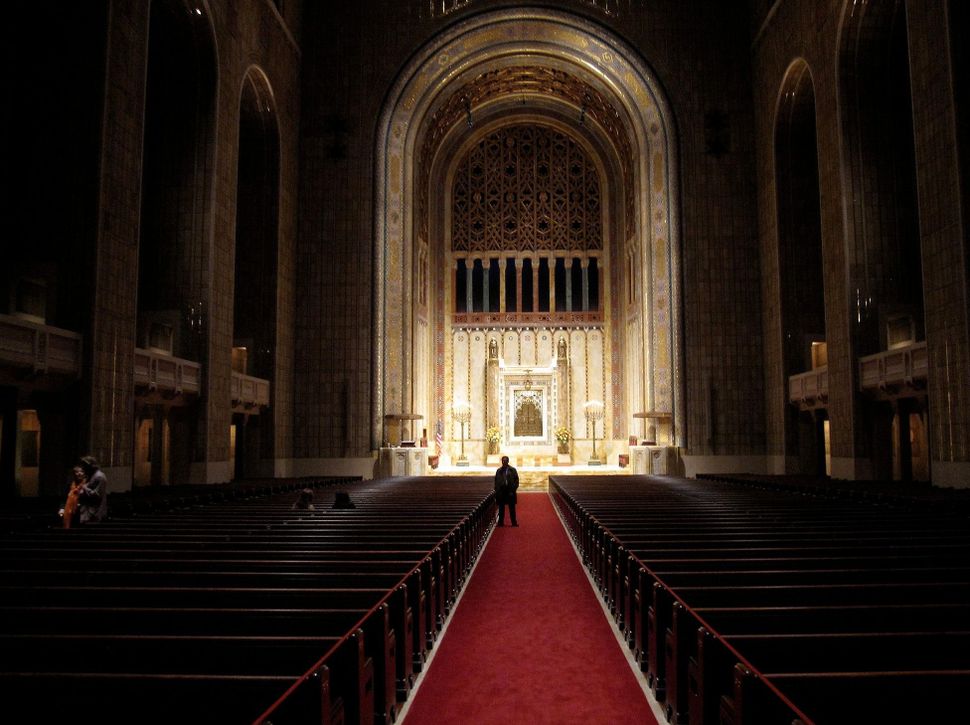 How much will a synagogue seat this High Holidays season run you?

Quite a lot, in some cities.

Curious about the exact numbers, we did a survey of some of the most expensive synagogue sanctuary seats in New York City, comparing price tags according to numbers posted online and those given by synagogue receptionists. The synagogues listed here, generally, offer seats to members only — so the cost of the seat is part of an annual membership for a two-adult household, which in most major Manhattan congregations will amount to a few thousand dollars.

Coming in at most expensive is Temple Emanu-El on Manhattan’s Fifth Avenue (no shocker) — seats in the main services are sold to members only. With base annual membership costs starting at $1,800 for a two-member household, and another $3,375 for a single reserved orchestra seat in the Fifth Avenue sanctuary, High Holidays can cost over $8,000 for one high-rolling couple. Some congregations we looked at (Emanu-El and Temple Israel of New York), offered tiered seats at various price points. You can choose off a seating map, not unlike an opera. For example, at Temple Israel, rows A-E cost $7,800; rows F-K $6,450; rows L-R $5,400; a balcony unreserved seat costs $3,300.

Some synagogues don’t even list the costs of seats. In Los Angeles’s Sinai Temple, for example, members who want a seat in the main sanctuary must request one directly from the synagogue’s development professional. But that’s on the West Coast — we’ll survey that one next year. Most of these synagogues have parallel services available for lower prices, and some offer free Yizkor services, as well.

Of course, the High Holidays services are one of the biggest fundraisers for most congregations; after all, something’s gotta keep the lights on and the bills paid.

And there’s something to be said about investing in one’s local community, at whatever level one can afford. Synagogue dues (High Holidays seats included) have been the foundation of many American Jewish congregations over the past century; somewhere from 45% to 85% of Conservative Jewish synagogue finances rely on membership dues, according to Barry Mael, the United Synagogue of Conservative Judaism’s director of Kehilla operations and finance. (This practice may hearken back to biblical texts. In Exodus, Moses runs a fundraising campaign for the Israelites to build the Tabernacle: “You shall accept gifts from every person whose heart so moves him” (Exodus 25:2). Though that may have worked better, and fairer, in the Sinai desert than on the island of Manhattan.)

High Holidays seats are just the tip of the iceberg when it comes to the costs of being Jewish. In recent months, a much larger conversation about affordability in our community has been roiling, with numerous surveys and opinion pieces depicting the rising price of Jewish day school tuition and synagogue membership. To mitigate costs, many synagogues across America are reconsidering the old dues systems: Some are questioning the need, some are considering voluntary dues, and others are moving on to models relying on income-based sliding scales.

For a no-charge service in Manhattan, consider Rabbi Judith Hauptman’s free prayer services Manhattan), which will ask for only a suggested donation.

Correction, October 4, 12:50 p.m.: An earlier version of this article, published on September 29, 2017, stated that Hauptman’s service was Reform. It is independent (traditional and egalitarian), not Reform.

(Full disclosure: Avital Chizhik-Goldschmidt’s husband is an assistant rabbi at Park East Synagogue, one of the synagogues listed above.)