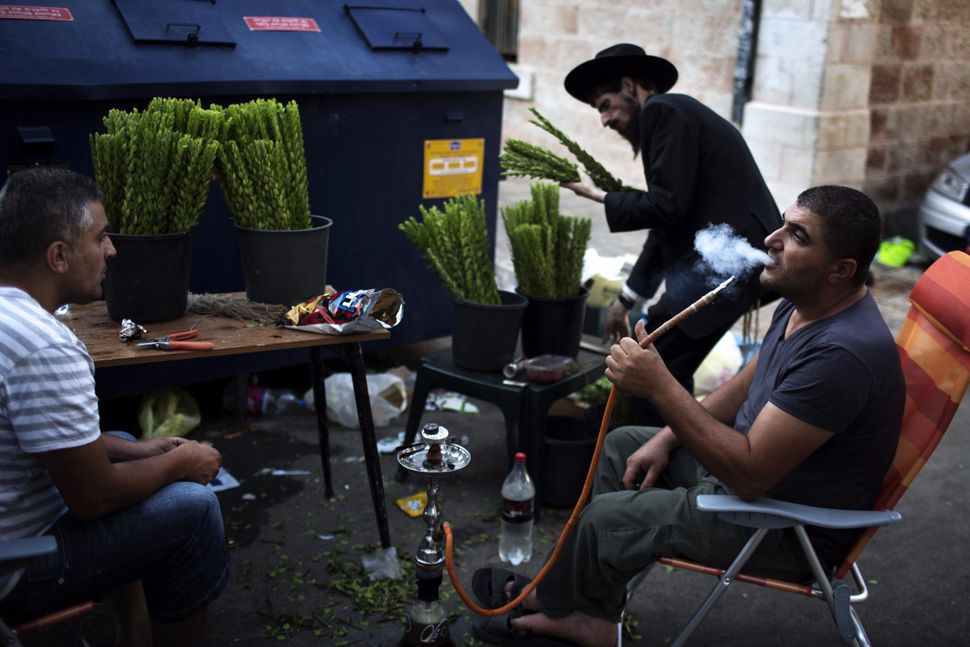 According to Genesis 1:29, God said, “Behold, I have given you every plant yielding seed that is on the surface of all the earth, and every tree which has fruit yielding seed; it shall be food for you.”

And cannabis is no exception here.

So we already know pot is kosher — even kosher for Passover, no less — but is it halal?

Kashrut and halal, the Islamic dietary laws, share a lot in common. Both prohibit pork and insects, both permit bovine and fish, but only with scales and fins. One major difference, however, is that alcohol is haram, or the Islamic concept of treyf. But cannabis, on the other hand, occupies more grey area.

The Quran does not expressly prohibit cannabis, as it does alcohol. While drinking is sinful, Islamic thought evaluates other mind-altering substances based on whether they “curtain the mind.” (In this sense, “curtain” means to veil or cover.)

As one of the Prophet Muhammad’s hadiths, or sayings, goes, “If much intoxicates, than even a little is haram.” So by this philosophy, if a lot of weed can get you very stoned, then even a little should be disallowed. After all, it would hence be classified as a “khamr,” or intoxicant.

But it’s more complicated with regard to medical marijuana.

“Muslims believe that there is no disease or illness that comes from God that can afflict humans that doesn’t have some sort of cure, some sort of medicine or treatment,” explains Ismail Ali, vice chair of the Students for Sensible Drug Policy (SSDP) board of directors, policy/advocacy council for the Multidisciplinary Association for Psychedelic Studies (MAPS), and an observant Muslim. This perspective, he says, can also be applied to the medical uses of cannabis.

Under a physician’s guidance, medical marijuana is not considered haram if it’s being used to treat a valid medical issue. Yet, more conservative Muslims may debate the extent to which ailments like PMS or generalized anxiety are as legitimate a medical reason to use cannabis as more terminal illnesses like cancer or epilepsy.

“My interpretation of whether or not a substance itself is haram, or prohibited, depends on intention,” says Ali. “The intention of behavior in Islam is one of the most crucial determining factors for whether something is wrong.” While someone’s intention and behavior are still up for interpretation by others, the way an individual reconciles their cannabis use and Islamic observance is quite personal.

That said, it’s almost unanimously agreed upon that the recreational use of cannabis contradicts the maqasid al-Sharia, or the higher aims and objectives of Islamic law.

In practice though, the presence of cannabis throughout Muslim regions tells a different story.

For centuries, hashish has been grown and traded throughout the Arab world, with Morocco and Afghanistan among the top providers. Meanwhile, in 2014, the Grand Ayatollah Sayyad Mohammad Sadeq Hussaini Rohani in Qom, Iran, issued a fatwa, or religious legal ruling, that entheogens (spiritual plant medicines) and psychedelics are halal for Shi’i Muslims under supervision. He also ruled that these plant substances don’t impair the mind or spirit. Rohani’s fatwa was prompted by an inquiry from Sufi mystic and Islamic scholar Wahid Azal from Lebanon.

So even if cannabis for recreational use is haram, it has been nearly ubiquitous nonetheless in Muslim-majority countries, especially among lower classes and for spiritual uses among the Sufi. According to legend, Haydar, the Persian founder of Sufism, stumbled upon a cannabis plant while wandering in the mountains. He ate the leaves and returned to his monastery talkative and spirited. In A Comprehensive Guide to Cannabis Literature, Ernest Abel, recounts how Haydar finally told his peers what he ate that made him so happy — so they, too, ventured into the mountains to try the cannabis plant and uncover the “pleasures of hashish.”