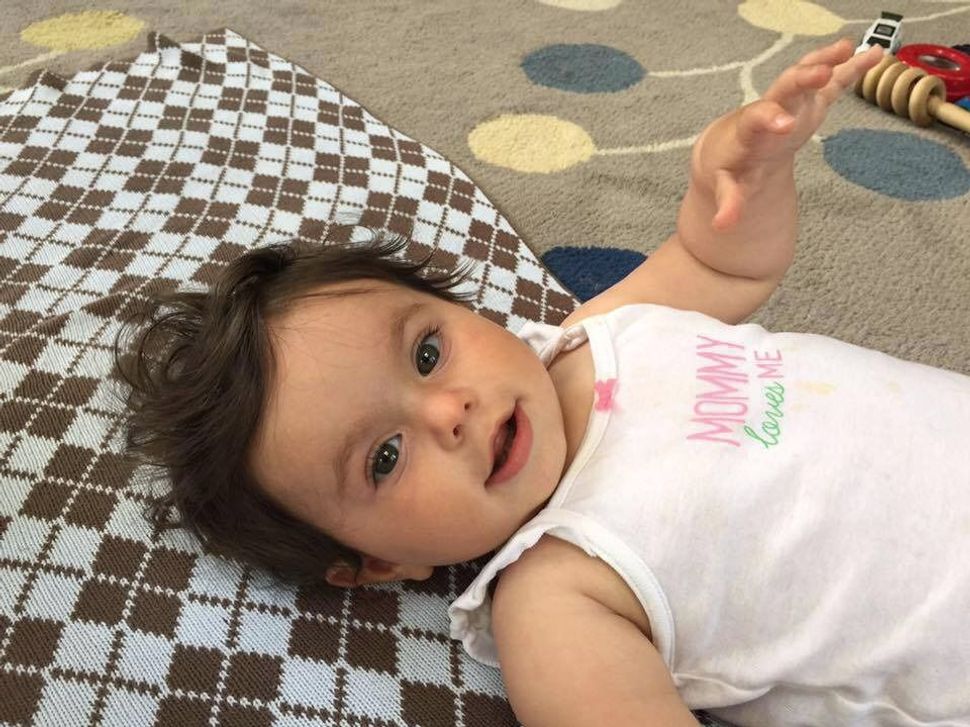 (Kveller via JTA) — About a year ago, I decided to be completely honest on Facebook and found out the true connective power of social networks:

I told my friends that my youngest child would die from a rare genetic disease.

Before revealing her illness, I used Facebook like many others. I was “on brand” — marketing myself by posting selected memories. From the moment I became pregnant with my first child seven years ago, I understood that my brand would be “Stay at Home Mom Who Dotes on her Kids,” and it was a job I relished. I kept the world apprised of my son’s every smile, coo and burp — every everything.

I curated my internet-visible profile to include only the good of parenting and none of the bad, although I occasionally complained about lack of sleep and blow-out diapers. I never wrote of the isolation I sometimes felt, or of my own first-time parenting fears. I saved those conversations for my in-touch friends and family, fearing that if I got too real on Facebook I wouldn’t be an entertaining enough friend to my masses.

I grew my brand as my family grew. I had two more children, both daughters. I was far too busy now to spend time snapping perfect pictures and tending to my newsfeed. My second and third children garnered far less attention than my first child, which is understandable given how people generally dislike sequels.

That all changed when my daughter Talia was diagnosed with Tay-Sachs, a fatal neurodegenerative disease. She died last summer.

My lighthearted comedy of a family had become a Lifetime movie of the week, and among many things I didn’t know how to handle was my social media presence. So I continued posting happy family photos during the terrible months when waiting for the test results and even after we found out the horrible truth.

I understood for the first time how Facebook is an alternate reality: You can create yourself as anything you want while hiding the parts you don’t want to show. How could people not see the lies behind my photos, I often wondered. What am I not seeing in their posts?

As Talia’s first birthday approached one month after her diagnosis, I obsessed over how to get a photo of her where she looked happy and healthy, mostly because I knew it may be the only birthday she celebrates — but also so I would have a photo to share with my Facebook community that didn’t elicit any questions. My brain was still in curator mode, trying to keep everything the same long after everything had changed.

At the same time, a year ago, the illusion of Facebook as a happy place for sharing happy family photos and silly internet memes came crashing down following Donald Trump’s election as president of the United States. My friends posted furiously about the impending apocalypse and took to social media to scream about the injustice around them, and to try to process their own depression over the election results.

Eight days after the election, four months after my personal world had crumbled around me, I finally made Talia’s diagnosis public, in part to show people how much worse the world could get and to walk them back from the ledge they imagined themselves to be standing on. Show me some happiness out there, I begged.

Everything that is good in the world did not disappear overnight. Find ways to channel your political grief while also continuing to find good and happiness in the world, as my own family was managing to do, I pleaded. Also, give me back my lighthearted distractions.

Before publicly outing Talia’s condition to the internet, I made sure to call every one of the friends who were still active in my life. I was determined to get to each of them before they heard about it from the internet. It felt important to give them that respect and prepare them for the heavy lifting I would be asking of our friendship in the next year.

I used Facebook to drive traffic to my newly created blog, where I tracked my mindset as much as Talia’s decline. When I found my will faltering, I would write down my fears and then share them with the world. The swell of attention my words received helped me alleviate my fears.

I tried not to write more than once a month because I didn’t want to overwhelm unsuspecting friends with doom and gloom. People could glimpse into my mind through these digital media, and could take their own time to process their emotions. Then when they reached out to me, it was always with something deeper than the dreaded “How are you?”

The friends I had in my Facebook community included long-forgotten elementary school classmates, out of touch, yet completely cherished camp friends, new neighbors whose names I could barely remember, old neighbors whom I longed to stay connected to despite now living half a country away, and as many family members as wanted me.

These friends now became a true source of comfort for me. Whereas pre-diagnosis I simply wanted to share my life with them without much thought as to their response, now I was seeking something deeper, something true out of them.

I received many personal messages from my far-flung friends, who sympathized with me and marveled at my strength. They also shared their struggles with depression and their own grief. They seemed grateful to have found a willing audience for their honesty.

I even heard from one high school friend who was himself raising a child with a rare disease and hadn’t found the courage to make it public. This friend, who was idolized in high school (and with whom I rarely ever spoke to back then), was struggling with the weight of his own expectations for his life.

He was the first person I knew, even loosely, who understood what I was going through, and he was the last person I ever would have expected to connect with. He went public with his own experience a few months later, received the willing and open love of his friends. I’m sure the pressure valve of self-expectation has loosened for him as well.

My awareness of the echo chambers in social media has forever altered my experience with it. It never returned to a purely happy form of distraction for me, and I’m grateful for that. I am also thankful for the surprisingly deep connections Facebook afforded me with my older friends.

Happy Facebook can be a place of escape — and it was for me earlier on — but I know now I much prefer to seek a real connection. Share something true and be prepared to receive truth in return.

Carla Steckman lives with her family in upstate New York. She blogged about Talia at www.thewarmweightoflove.wordpress.com and is currently writing a book on her experiences of parenting through the abyss.