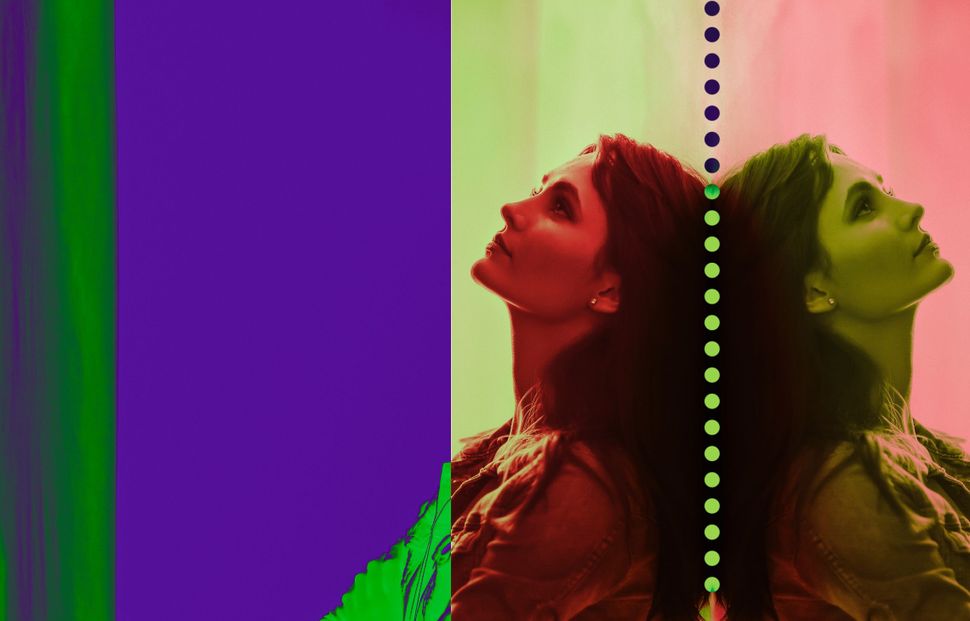 As a child growing up in Philadelphia, when adults would ask me about my religion, I would answer, with a smile, “I’m nothing!” This resulted in a polite smile mixed with pity and bafflement.

My Ukrainian Greek Catholic mother married a Jewish man, as did two of her four sisters. My mom may have married my Bronx-born, yeshiva-fleeing father to spite her parents. His mother wasn’t pleased, either. The one thing that the two sides of my family shared was the fact that, at least, Hitler hated them all: After all, Mom’s parents met on a slave labor farm in Germany.

My folks also both agreed on one thing: Religion was the opiate of the masses, and therefore religion was strictly forbidden to us as children. We were not allowed to learn the basics of either religion; I was told a bat mitzvah was “capitalistic,” and I was pulled out of Ukrainian Catholic language and culture school when I brought home drawings of Jesus Christ.

In grade school I’d ask Jewish teachers, parents and friends whether I was considered to be a Jew, and the answer was always the same: “You’re not Jewish, because your mother isn’t Jewish.” Thus, my standard answer became, “My father is Jewish… so technically I am not.”

Being children, my classmates were quick to point out that I was not in the club and couldn’t go to synagogue. My Orthodox Lubavitch neighbors seemed to enjoy keeping us as their goyishe helpers, turning on their lights on Shabbat or selling us their chametz every Passover.

Later, in college, my women’s studies professor divided us into small groups by “minority” status, putting me and another student into the “Jewish group.” As I started to apologize, “But technically I’m not Jewish,” my teacher cut me off: “Interesting how you keep repeating that!”

I wasn’t in denial, but rather, I was told my whole life that legally (according to Jewish law) I was merely a wannabe if I wasn’t upfront about my exact “status.”

Then, at the age of 27, I was living in Brooklyn when I met a tall, handsome Australian artist, “Zeek,” who called himself a postmodern Orthodox Jew. He made faith seem cool, like Matisyahu, the formerly Hasidic reggae rapper, and was also heavily involved with Chabad. Zeek took me to underground parties where Y-Love performed. When he asked me if I was Jewish, I responded at once: “Oh yes, I’m Reform.” But when he found out the details, he told me I wasn’t halachically Jewish, and he unceremoniously dumped me. To prove him wrong, like any mature adult, I decided to travel to Israel; if I was Jewish enough to qualify for Birthright, I thought, I might be Jewish enough.

I’ve been practicing Judaism for eleven years now, yet somehow I am always considered “half.”

The position of the half-Jew is different from any other bicultural or biracial adult: One side is rejected by traditionalists, and the other by anti-Semites.

Ask most Israelis, Conservative Jews and any Orthodox Jew, and they will quickly tell you that I am not Jewish. On the other hand, during a teaching stint in Switzerland, I lost my job due because I was practicing Judaism openly and talking about it; and with my Jewish background, I could never work in Saudi Arabia. This puts me -– and all other so-called “half Jews” — in a painful twilight zone, neither here nor there.

But the concept of matrilineal descent itself has very obscure origins. While it may sound like a bold feminist statement, it was most likely instituted to be able to identify bloodlines in the case of rape or adultery.

According to Shaye Cohen, professor of Hebrew literature and Philosophy at Harvard University, and the author of “The Matrilineal Principle in Historical Perspective,” there is no biblical evidence for the matrilineal principle. The first text that discusses it is rabbinic in origin, in the Mishnah Kiddush 3:12. The law may have been introduced no earlier than the first- or second-century C.E., either as the result of the influence of Roman law or as the result of a new rabbinic theory concerning the status of mixed marriages. Before the introduction of this rabbinic law, according to Cohen, the status of offspring of mixed marriages almost always was determined by the patrilineal line.

As for my personal journey, I have decided to undergo conversion, eventually — not right now, but perhaps after I marry, so that my children don’t have to go through what I went through.

“Why bother converting through the Orthodox process if you are just going to change to non-Orthodox afterward?” asked my Hasidic friend, who taught me so much about Judaism and sold me chametz when we were neighbors growing up.

“I just want the stamp, so I then I can rebel!” I joked, because like many ba’al teshuvahs with whom I identify, I rebelled against my parents by becoming religious.

But I’ve made my choice about who I am – despite the hardships, and regardless of whether or not I go through conversion down the road.

Because, baruch Hashem, I am just another Jew. Period.

Alyssa Pinsker, aka Girl Gone Global, has lived in India, Japan, Switzerland, France and New York City for at least one year each, and has visited 40 countries and six continents as a writer, teacher, student and performer.