Meribel Goldwin (left), the speaker at the event and president of Blossomed Life and Elena Tedeschi (right), the chef at the event and owner of Well Rooted Kitchen Image by Udor Photography

When Meribel Goldwin arrived from Belarus in 1994, she was ten years old and skinny. A couple years of eating hot dogs and sliced white bread on a food stamp budget, as well as traditional Russian foods prepared with sugar, salt and hydrogenated fats, turned her into a roly-poly American statistic. She became the one in three children who, according to the American Heart Association, was overweight or obese.

The 34-year-old nutritionist who presided over the Manhattan JCC’s Generation R foodie event on March 8, now looked every bit the fit, black-clad New Yorker as she encouraged the forty attendees to “push the matzo ball forward” into “nutritious plant-based” territory.

Goldwin, the recipient of a Blueprint Fellowship from event sponsor COJECO, was preaching to the converted — food-conscious thirtysomethings who share the speaker’s Russian-Jewish history and an acceptance of healthy lifestyle habits. Her mission: Help the crowd enjoy the comfort foods of their shared immigrant youth while moving away from the schmaltz-and-gribenes (greeven) combo that is the DNA for much calorie-rich Russian cuisine. 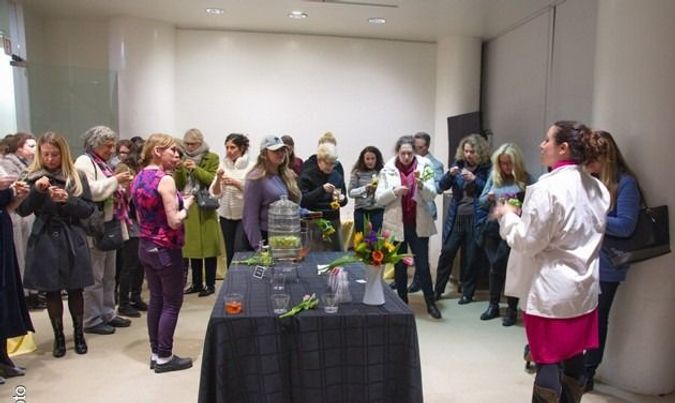 In an effort to explain how the Russian-Jewish diet originated, Goldwin offered up a brief food history in the shtetlekh, thousands of Jewish market towns throughout the Russian Pale of Settlement, Congress Poland (Russian-administered Poland), Galicia and Romania.

For most eighteenth- and nineteenth-century Jews in these regions, life was a series of restrictions. In the Pale of Settlement, for example, where most Jews lived, Empress Catherine II banished Jewish merchants from working in Moscow, relegating all Jews to a boundary between the Moscow outskirts and Prussia. The inevitable limited economic opportunities resulted in great poverty. When Emperor Alexander II came along, Jews had somewhat more freedom of movement, especially if they were craft workers, holders of academic degrees or military veterans. But in 1881, legislation in the wake of Alexander’s assassination brought about new restrictions. By the end of the nineteenth century, the descendants of Torah scholars, merchants and artisans suffered one of the lowest standards of living in Jewish history.

The effect of economic strangulation on the Jewish diet? Malnutrition at worst, Goldwin said, and an intake of high-calorie foods at best. To illustrate the latter preferred outcome, Goldwin showed a four-minute YouTube video of Horodok, a once-Polish shtetl in which relatively prosperous Jews owned one or more cows. Hence, the emphasis in Russian-Jewish food preparation on milk, butter and cream.

Goldwin observed too that shtetl Jews solved the problem of food preservation by pickling mushrooms, tomatoes, cabbage and fish. Garlic, onions, potatoes and bread, mostly in plentiful supply, rounded out a meal. Chicken was reserved for Shabbat, geese for yom tovim. The relatively long-lasting schmaltz and gribenes could keep noodle and potato kugel dishes fresh for a few days.

Goldwin argued that these dishes, and others such as ptcha (jellied calves’ feet) and shuba (pickled herring and vegetables), were not that unhealthy in a culture where ingredients were sourced locally, and where people walked more than they do in the U.S. Today a sedentary American lifestyle has made the schmaltz-and-gribenes diet unsustainable for a younger generation of Russian-American Jews, she said.

Plants to the rescue

Goldwin, who owns a nutrition consultancy called Blossomed Life, recommends substituting plant-based foods for the schmaltz, eggs, cheese and milk that characterize so much of the Russian menu. Instead of liver — mushrooms or lentils. Instead of eggs — simmered flaxseed. Instead of matzo — quinoa. Instead of herring — pickled eggplant. 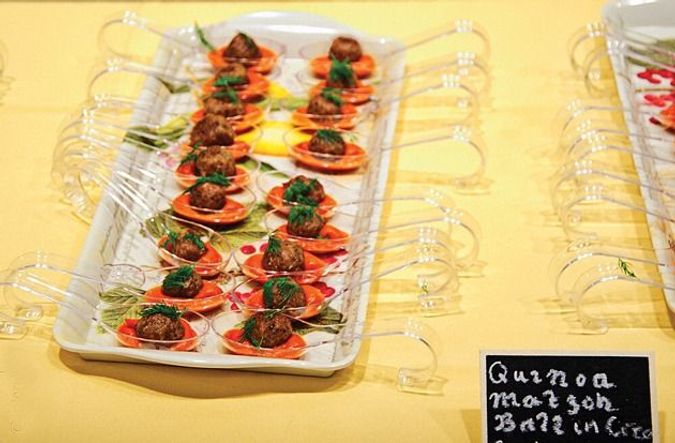 Goldwin is not opposed to indulging an authentic Russian food craving on special occasions.

“I’m only concerned that a combination of high-fat ingredients, inflammation-producing animal products and a lack of exercise is harming our children and grandchildren,” she says. “My generation of Russian Jews needs to ensure a connection to our Russian food traditions while eating mindfully.”

Indeed, nutrition activists such as Goldwin have identified a healthcare paradox in the Russian-Jewish community: First generation individuals have better health outcomes than second generation, and health outcomes worsen the longer immigrants remain in the U.S. She points out too the research that makes a positive correlation between deep-fried meats and digestive organ cancers.

“What was good in our home countries is not good for us here,” she says. “We Jews need to do what we have done throughout history: Adapt brilliantly to new circumstances.”

Happily, the new circumstances this time are not TB-ridden tenements. They are kugel topped with shiitake “schmaltz” or quinoa matzoh balls in creamy carrot-beet sauce — two accommodations to a holistic food culture that the evening’s attendees sampled.

Sample one of the recipes that helped Goldwin lose 25 pounds.

Safety tip: Fill blender half way. You may need to blend in batches. Allow steam to escape by placing a dish towel beneath lid to prevent accumulation of steam, which can blow off the lid.

1 flax egg equals: 1 tbsp flax meal and 3 tbsp of water. Mix and allow to sit 5-10 minutes until it forms a gel-like consistency.