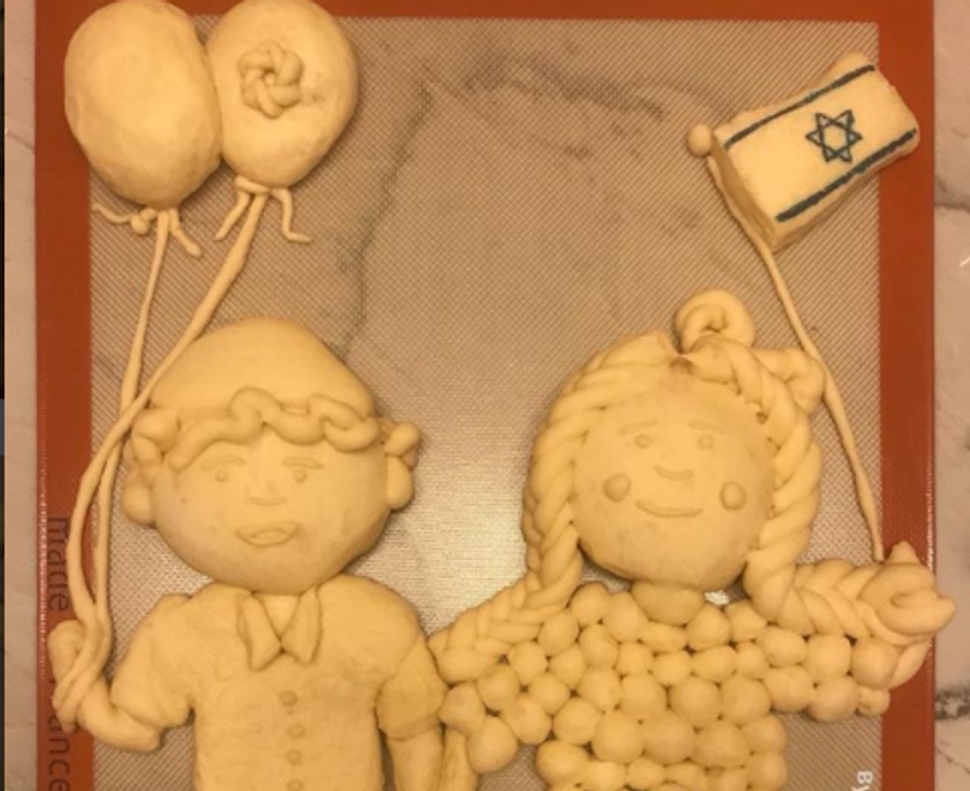 If you need to build an ark, the Torah will tell you how. If you need to construct an ephod, the Torah will tell you how to do that, too. But if you want to bake challah, you have to look beyond the Five Books of Moses, as Gitty Salomon has. The ingenious Brooklyn, N.Y.-based folk artist not only bakes a variety of challah. She also uses challah dough as sculptor’s clay to illustrate nearly 6,000 years of Jewish history, ritual and folklore.

What an amazing experience, bH! Thank you so much to Linda and @moms_on_a_mitzvah for inviting to do my first Challah demo. Presenting with Kelly from @myorganicdiary and sharing the stage with @flatbushgirl was a treat! And thank you to everyone who came. So grateful ✨ #challahart

A speech therapist by training, Salomon began her avocation in 2014 by baking a “schlissel” challah for the first Shabbat after Pesach. That tradition, in which bakers make challah in the shape of a house key, led to her making a flower-shaped challah at Shavuot seven weeks later. Salomon began posting photos of her new challah art — baked and unbaked — on Facebook, Instagram and Pinterest. She received an onslaught of positive feedback. Attracted to the hands-on aspect of the project, her artistic conceptualizations as well as the social media attention, she was soon crafting challah sculptures for every occasion.

To fix on a subject, Salomon goes online each week to read a parasha summary. Some parashiyot — the ones in “Genesis,” for example — are highly narrative and lend themselves to illustration (see “Tree of Life”). Others, particularly in “Leviticus,” strike Salomon as more esoteric, and some weeks she opts instead to illustrate a month on the Hebrew calendar (see “Adar”) or a scene from ”Fiddler on the Roof.”

Among Salomon’s other themes: Israel Independence Day (Yom Haatzmaut), American Thanksgiving and the Lion of Judah.

The dough Salomon uses is rich in eggs, sugar and gluten. “It’s delicious, but not the healthiest recipe,” she says. “In this case, artistry trumps nutrition.”

Salomon’s challah artwork survives only in virtual form. As for the actual bread sculptures, they share the same fate as their more conventional “bread-ren:” Salomon and her family eat them on Shabbat.

10.Make a well/hole in the middle of mixing bowl.