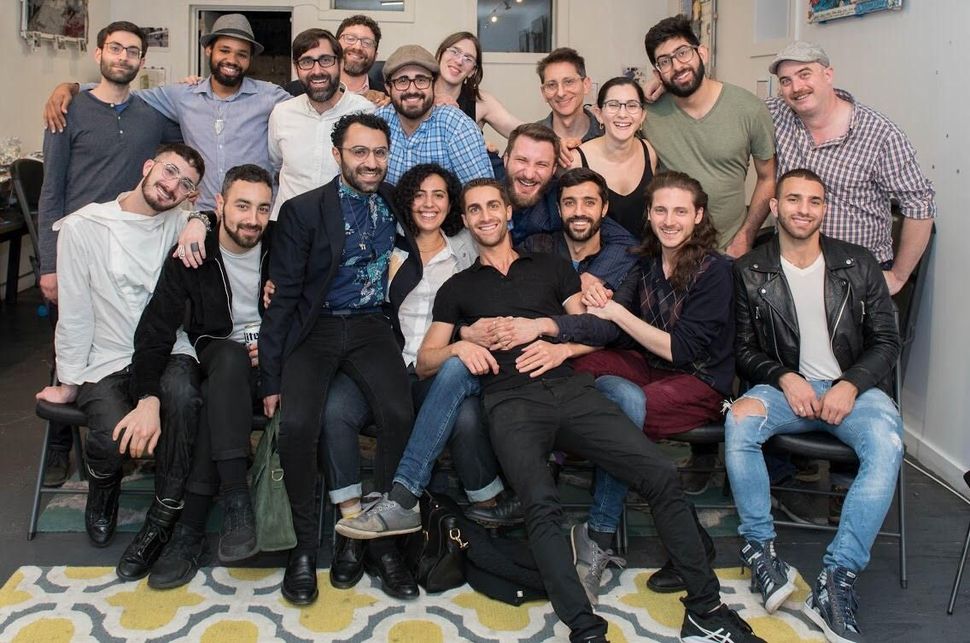 On a Saturday night in May, somewhere in Crown Heights, a group of young professionals in their 20’s and 30’s swayed back and forth to the classic Mizrahi songs they grew up on — everything from Ofra Haza to Cheb Khaled.

The gathering, set with mood lighting and a perfect sound system, was attended by Sephardic and Mizrahi LGBTQ Jews, a growing community called the ‘Sephardic-Mizrahi Q Network,’ which up until recently had no way to weave together these two seemingly conflicting threads in the tapestry of their identities.

The dance party was a major step forward for the fledgling community molding its own identity.

This community is just one of those created by Ruben Shimonov, a 30-year-old Bukharian Jew currently enrolled in a dual-master’s degree program in Public Administration and Judaic Studies at New York University. For the better part of the last decade, Shimonov has dedicated himself to building community for people with whom he shares an identity: young Russian-speaking Sephardim and for Sephardi and Mizrahi Jews. His latest community building effort is one at the intersection of Mizrahi, Sephardi and LGBTQ identity — an identity to which he too ascribes.

Born in Tashkent, Uzbekistan, Shimonov and his family left the former Soviet Union to seek asylum in the United States when he was six years old. After settling briefly in New York, his immediate family moved to Seattle, Washington, where Shimonov spent most of his adolescence. In Seattle, his family joined “a community deeply rooted in Sephardic tradition— and when I say Sephardic I mean Ladino speaking,” he laughed, referring to the nearly dead Judeo-Spanish language spoken by only 130 people in the United States, according to U.S. Census Bureau’s 2009-2013 American Community Survey.

Summing up his identity was never easy. From a young age, Shimonov explained, he already had “a multilayered identity.” He came from a Bukharian family that lived in Central Asia for well over 2,000 years, but at the same time he was a “Russian speaking Jew, because we were also part of the Soviet experience and experiment.” From another angle, he explained, he was this first-generation American trying to discern American Jewish culture. And all of this was against the backdrop of this Greek Sephardic community in Seattle. He downplayed his complex identity as a child because he felt that it put him outside of the Jewish community’s known boxes.

After moving back to New York in 2013, Shimonov took up the role as the cross-community engagement coordinator at Queens College Hillel. At first, his position was only part time, but within two semesters and his ability to draw in Bukharian, Persian and other Sephardic and Mizrahi students to Hillel, his role quickly became full time, as Director of Cross-Community Engagement and Education.

One of his flagship programs was a monthly Bukharian Choikhona, the traditional word for tea house, where Bukharian students and those interested in the culture would study, discuss and celebrate Bukharian culture, history, language. The program allowed these students to celebrate their community— and allow themselves to see themselves and to be seen as more than “gold chain and tracksuit wearing people of Eastern communities,” Shimonov said, playing on widely held stereotypes of the Bukharian community. During the 2015-2016 academic year, the program involved 160 students, many of whom repeatedly returned to other programs.

As he speaks, Shimonov insists on giving “credit where it is due,” he repeats, naming all the individuals who have supported him along the way. He names everyone from mentors to those who have helped set up for events — sometimes without names, mindful not to ‘out’ anyone who may not want to be publicly named as LGBTQ.

Shimonov is careful to distinguish both “Mizrahi” and “Sephardic” identity when he speaks about his community building work, because the two connote different ancestral heritages. The heritage of Sephardic Jews has its roots in the Iberian Peninsular or Sepharad, the Hebrew word for Spain. Over the centuries, those communities have flourishes around the Mediterranean basin and the Middle East. The term is often used informally to describe non-Ashkenazi communities. Mizrahi, meaning ‘eastern’ in Hebrew, is a more specific term for Jews with origins in the Middle East, the Caucasus and Central Asia that are over two thousand years old.

Upon moving to New York, a series of family events happened that made him realize “every day is a blessing, tomorrow is not a given, and I need to live my life as full of purpose as I can.” That inspired him to come out as gay.

Now happily married, Shimonov recalls being “kind of a late bloomer.” It’s not that he was consciously remaining in the closet or was trying to change his attractions, but “it was a certain part of my identity that was on the backburner.”

“I was so engaged and deeply connected to other parts of my community, that I didn’t give myself the time or the space to process [who I was].”

Breaking the news to his family was not simple. “It’s not that I didn’t think my family wouldn’t accept me,” he explained, “but because there’s this fear that I didn’t want them to think they didn’t know who I was.” His family is and was supportive.

But Shimonov says his experience of family support was rare, in Sephardic, Mizrahi and Russian speaking communities do not have such a support system.

“When we’re talking about homophobia and transphobia within the Jewish world, you’re really looking at Orthodox, Hasidic, Sephardic, Mizrahi, Russian speaking — those are the pockets of the most rejection,” explained Mordechai Levovitz, the executive director of Jewish Queer Youth (JQY).

And in fact, the UK’s former Sephardic chief rabbi, Joseph Dweck, was forced to step down from his position as clerical judge in 2017 after saying that communities should not be blind to the suffering of their LGBTQ members. There should not be witch-hunts, he said, adding there were “plenty of skeletons in everybody’s closet.” What is particularly striking is that the Dweck did not advocate any form of pride or LGBTQ inclusion programs— he just noted the difficulty of the struggle facing LGBTQ individuals in the Orthodox Sephardic and Mizrahi communities. Regardless, the community backlash was severe.

Organizations like JQY and Eshel, an organization for Orthodox LGBTQ individuals which Shimonov cites as supportive in his coming out process, run occasional programming for LGBTQ Mizrahi and Sephardic Jews. “We try to incorporate specifically Mizrahi and Sephardi activities in JQY, so people feel comfortable and have a taste of home,” Levovitz explained, but “it’s not every day.”

“In Jewish queer spaces, we don’t see people who look like us,” he said speaking of the Mizrahi and Sephardic Jews. The most visible leaders of LGBTQ Jewish sphere are of Ashkenazi descent. “Even if we do feel welcomed, there is often ‘exotification’ [at events].”

Shimonov posted in a secret Facebook group for queer Sephardic and Mizrahi Jews, and suggested a meet-up over a potluck Friday night dinner. The response was overwhelmingly positive, and quickly, a community materialized from the internet and in the material world. Over time, organizations including Moishe House, OneTable, COJECO BluePrint Fellowship, and the Genesis Philanthropy Group began to support the program.

Rebecca Davoudian, who lives in Great Neck, New York, and hosted one of the dinners, told Jewcy that homosexuality is often a taboo in Sephardic communities. “It’s nice to give people a space where they can be Mizrahi and Sephardic and queer and Jewish.”

“We refuse to sacrifice one part of ourself for the other— this is us, this is all of us,” Shimonov said. Since starting to organize these meet-ups, Shimonov has seen young participants stepping up to the plate as leaders within this small community, organizing their own events, as they feel more empowered to express their true selves.

Walking into the dance party in Brooklyn earlier this month, just hours before Israeli performer Netta Barzilai won Eurovision, Shimonov and his husband surveyed the crowd. They were glad to be attending their first Sepharadic and Mizrahi LGBTQ party – this time not as hosts, but as guests.

Rachel Delia Benaim is a reporter and editor at weather.com. Her reporting on the intersection of religion and gender has been featured in The Washington Post, The Guardian, and Tablet Magazine, among others. Follow her on Twitter and Instagram