How To Survive Jewish Weddings As A Cash-Strapped Bridesmaid 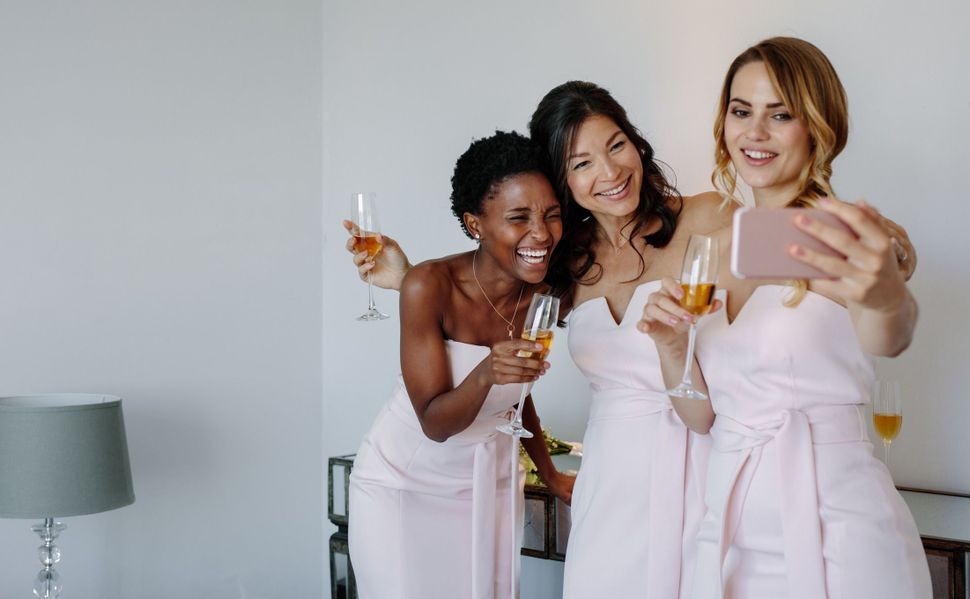 Serving as a bridesmaid in a Jewish wedding is not cheap.

“It cost me about $700 per wedding, when I calculated cost from the day the couple gets engaged till the end of their sheva berachot [traditional post-wedding celebration],” said one woman in her early twenties.

Often, a bridesmaid is obliged to purchase a kitchen essential as a shower gift for the newlywed couple, in addition to a marching gown and throwing an often-decadent bachelorette party. Expensive, yes, though some argue that all the frilly extras are often what make this time special (and fun!) for both you and the bride.

So how to find that perfect balance? If you too are a Bridesmaid On a Budget, here are some tips on how to make it out of wedding season alive with a full wallet in tow:

When I first started asking people about their solutions to being a cash-strapped bridesmaid, I was met with a simple but hackneyed response from a male friend: “Get married.”

I’ve received this comment before, but with far less sarcasm as it was meant to be taken seriously.(Apparently, those that think babies come from storks are also convinced that husbands can be picked up at the grocery store too.)

In any case, getting married would solve all your bridesmaid related woes, but I wouldn’t suggest you stave off bridesmaid debt by tying the knot. Although, if you are the first of your friends to get married, you may have a bigger selection of single friends to choose from, which means more money can be pooled into your festivities. One woman in her mid-twenties whom I spoke to said, “Some girls will ditch you. And when they’re engaged, they’ll get closer to you so you’ll pay for their things.” I and others can attest to this debacle but in reverse order: Too many times, I’ve agreed to be part of a bridal party, put money and effort into the requisite occasions, and then lost contact with the bride once she’d entered nuptial bliss.

“In the last 2 years I’ve joked that asking someone to be a bridesmaid is like a backhanded slap in the face. Like, please do all this work for me to have a fun wedding so I can forget you exist by the time my one-month anniversary rolls around,” says another woman I spoke to. One can only expect that those same brides celebrate with as much gusto when your time rolls around.

After consulting with a bridesmaid connoisseur (she marched in 5 weddings over the course of two months!), she had this to say about glamour and beauty costs: “One thing that allows me to keep within a budget while I’m a bridesmaid is learning how to do my own makeup. I invested in better products and started reading makeup books to teach myself how to apply my own makeup without having to pay a professional. Another big help with expenses is borrowing or rewearing gowns instead of buying a new one each time. I have worn a couple of my gowns between 2-4 times each. I’ve also borrowed from other girls and it really helped.”

Another young woman in her early twenties told me that she usually gets her makeup done at Sephora. “With a loyalty card, they’ll do it for free and you just have to pay for the lashes. The alternative to the loyalty card at Sephora is spending $50 on makeup products, so at least you get product beyond the service, making your spending a little bit more worthwhile.”

If you’re asked to wear a specific color, I’ve had a lot of luck on reputable sites like Rent the Runway or Fame and Partners where you can customize a particular style, color, and shape to your liking.

3. Just say No to the Dress

We live in an age where saying yes is the token answer for everything. Grab life by the bootstraps, right? Well, not always.

“If you’re not friends with the person, don’t say yes,” says a recent NYU grad school student. “If I don’t have that internal motivation for someone it’ll end up feeling bitter. The bridal party is already an experiment of sorts with female interaction.” She goes on to explain how everyone comes from different financial backgrounds and has different expectations, and that it’s often difficult to fit everyone’s specific needs. At the end of the day, you all have one mutual interest: to make the bride happy. But you have to know when it’s time to sit it out. Last year I had a career opportunity the same weekend as a friend’s bachelorette party. I weighed out my options, and ultimately told her I’d be missing her girl’s getaway, in the hopes that as a true friend, my opting out would not affect our friendship.

“These are the things that make up a life together,” Katherine Heigl’s character in the archetypal bridesmaid movie, 27 Dresses, says while registering gifts for her sister’s bridal shower. Her husband to-be chimes in by saying, “This is the useless crap that the 70-billion dollar a year wedding industry convinced us we have to have or we won’t be happy.”

It’s easy to lose sight of what’s important when you’re caught up in all the festivities. If the bridal party truly understands that they’re preparing a couple for their life together and not just for a wedding, it might make gift shopping more practical.

In my Sephardic culture, the bridal party chips in for what’s called the wishing well— a laundry basket filled with kitchen essentials debuted at the bridal shower. “I created a general list (compiled from other lists that people have sent me) of the wishing well necessities. Buying the best gadgets is not always the way to go because there could be a product equally as good for a better price,” the bridesmaid connoisseur tells me.

As for the bachelorette party, there is no need to go something extravagant. If the bride really has her eyes set on a destination party, the recent NYU grad school student says, “Get the groom involved. In some cases, he will chip in. He feels the tension when the bridesmaids are disorganized, and he sees that through his bride. Ask him: Do you have better ideas? Can you book a flight or hotel for her if we want to make it a surprise?”

Even with these different approaches, there is no way to get around the expenses that add up when you have multiple friends getting married at once. A social worker I spoke to, in true Kristen Wiig style, told me: “There is no ‘on a budget.’ Lol. I’m just poor.”

How To Survive Jewish Weddings As A Cash-Strapped Bridesmaid