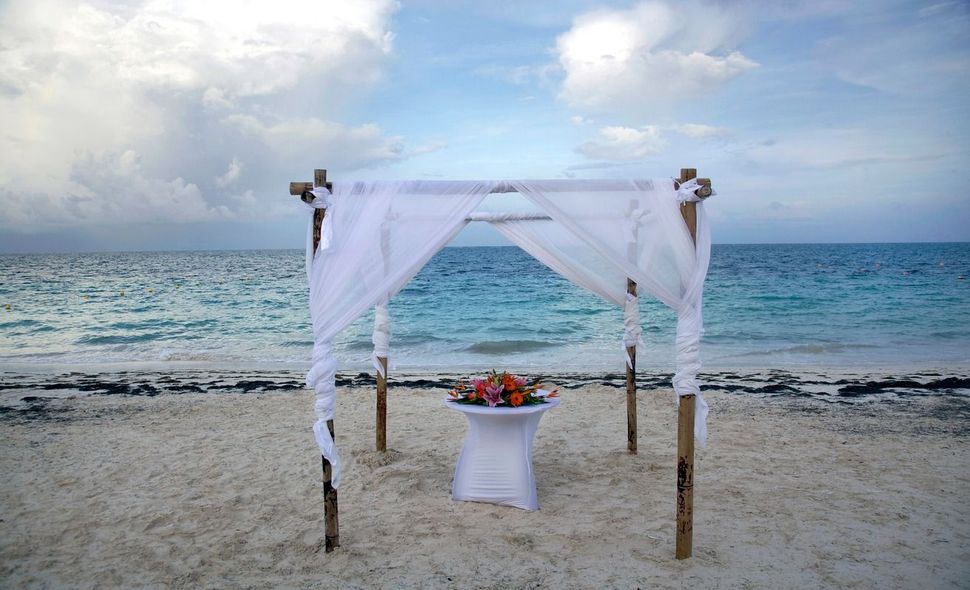 The chuppah, the traditional Jewish wedding canopy, is commonly thought to represent the home the bride and groom will create through their marriage.

And in recent years, more and more couples are putting thought into how to make that chuppah more indicative of who they are personally, both as individuals and as a couple.

This kind of individualization can be visual, in the form of a striking chuppah made of materials significant to the bride and groom, or symbolic, by using a particular item as a canopy that has a place in the couple’s history.

Making a chuppah more personal to the couple beneath it feels new, but actually dates back to the Babylonian Talmud, Gittin 57a: “It was the custom when a boy was born to plant a cedar tree and when a girl was born to plant a pine tree, and when they married, the tree was cut down and a canopy made of the branches.”

Personalizing the chuppah is an innovation in the Jewish ceremony to which many rabbis give their unofficial blessing. “Rabbi Karen Perolman of Short Hills, New Jersey said she believes personal choices in the form of an individualized chuppah are especially meaningful. “I love a personalized chuppah,” she saidsaid Rabbi Karen Perolman of Short Hills, New Jersey. “The idea that there are people, alive or dead, who are helping to shelter a couple’s new home and their first home as a married couple is beautiful. The symbolism is perfect.”

London-based Karen Cinnamon runs the blog Smashing The Glass, devoted to innovative and creative takes on elements of the Jewish wedding. She said that in the five years she’s run her blog, she’s seen more and more unusual chuppahs, full of color and life.

“Guests want to walk into the ceremony, and see the chuppah and think, ‘Oh, this is so THEM,’ not, ‘oh this is devoid of personality,’” Cinnamon said. “You want your guests to feel that your wedding is a one-off that reflects who you are as a couple. It’s a great element to express yourselves and have fun with, and it’s such a beautiful visual focal point.”

One of Cinnamon’s favorite chuppahs, featured on Smashing the Glass, was a chuppah at a wedding at the New York Public Library, where the “poles” were made of towers of artfully-arranged books, and the “canopy” was composed of dangling light bulbs – one of which the groom helped himself to and smashed at the ceremony’s conclusion in lieu of a glass. 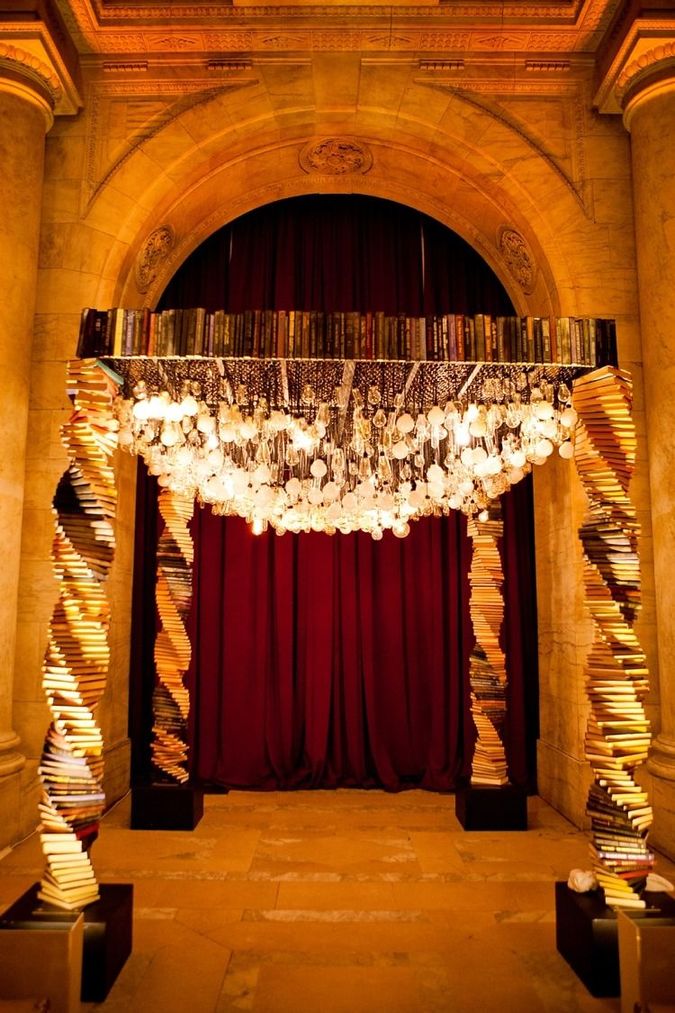 “It was a great example of a chuppah playing into the theme of the celebration and the couple’s identity,” she said.

Many couples choose to integrate florals or family heirlooms into the chuppah. Decadent floral chuppahs have taken center stage at many wedding ceremonies in what some might call the “Pinterest effect.”

While many couples choose to use a grandparent’s tallis as a chuppah canopy, symbolizing the integration of the couple’s past into their future, some attempt to bring friends and relations into the chuppah in other ways. Perolman worked with a bride who integrated her deceased mother’s wedding dress as part of the canopy.

Rabbi Faith Joy Dantowitz of Livingston, New Jersey said she has worked with couples who invited all the guests to design a patch, and later, made a chuppa out of all of the patches. Such a measure, she said, is a terrific way to personalize the ritual, but she cautioned that it can be a lot of extra work: “I think personalization is wonderful if it is meaningful to the couple — and not a source of more stress, as planning weddings is not stress-free.”

Not only can the chuppah serve to symbolically bring friends and relatives, alive or deceased, into the ceremony, but it also can serve as a point of symbolic integration in an interfaith marriage. Perolman said that many interfaith couples use a piece of cloth for the canopy that is from the non-Jewish side of the family in order to bring “the other side” into the ceremony.

Rabbi Sari Laufer in Los Angeles, California said she officiated at a wedding in Mexico between a Jewish man from Mexico City and a woman who converted from Catholicism. The mother of the bride, who had been her daughter’s catechism teacher and struggled with the conversion, made the chuppah canopy out of Mexican white cotton.

“It was incredibly moving,” Laufer said of the canopy. “In general, I love any part of the ceremony that tells the couple’s story, like a tallis belonging to a grandfather, or a chuppah made out of fabric that has some meaning to the couple.”

And sometimes, the innovation is less structural and more in terms of placement. Cantor Lucy Fishbein deliberately chose, when she got married in August 2017 in Cape Cod, to place her chuppah not in front of the guests, but rather in the center, with guests radiating out all around the chuppah.

“Rather than have our Rabbi rabbi facing the crowd and our backs to everyone we loved, we wanted to find a way to have lots of vantage points and connections to the kahal throughout our wedding,” Fishbein said. “We were in the center of a circle with our bridal party and families on one side and the remainder of our guests on the other.

“That way all our guests could connect panim al panim – face to face — with either our rabbi or one of us. It made it feel more intimate and created a really sacred circle, almost as if it mirrored the seven hakafot (circles) from the wedding ceremony,” Fishbein said.

Fishbein’s chuppah itself, in fact, is famous: it has been written up in The New York Times in 2014 as “The Traveling Chuppah,” under which over 50 couples have been married.

Cinammon said that traffic on her Smashing the Glass blog has led her to believe that innovation in elements of the chuppah and the ceremony itself will only grow in the future – because of the importance of personalizing something so meaningful.

“For us, as Jews, the ceremony is what it’s all about,” Cinnamon said. “Favors are fun, but they’re not symbolic, they’re not who you are.

“Within the Jewish ceremony, we have so much latitude for beautiful, creative elements where we can really express ourselves,” she said. “And you get inspiration and confidence when you see other people doing things that are different, and realize: I don’t have to listen to my parents, or do what they did. We can do something that expresses the identity of the two of us.”

And sometimes, the chuppah takes on a life of its own after the wedding, even when a life is extinguished.

“I officiated an unveiling for a 50-year old husband and father of 3 who died suddenly a year ago, 6 days after his twins’ bnei mitzvah,” Rabbi Michael Friedman of Westport, Connecticut said. “The widow used their chuppah cover to cloak the gravestone before it was unveiled. There was not a dry eye.”