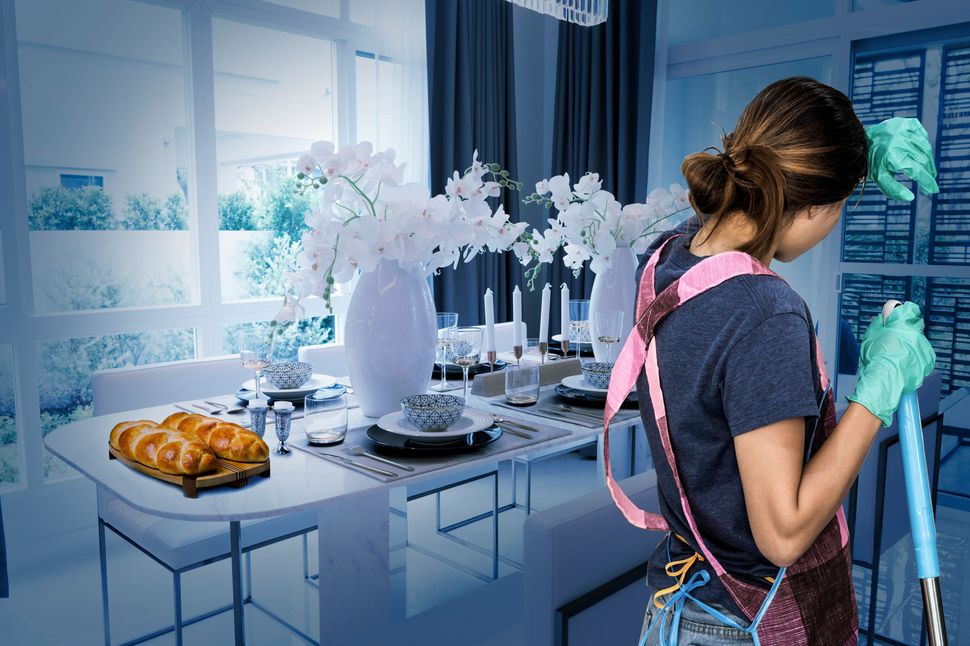 The room sparkles, a montage of brilliantly colored wigs, gleaming cufflinks, the Sabbath china set. The men recite the prayers with such gusto! Bravo, what a Yeshivishe accent, every ‘oy’ pronounced loud and clear, your rebbe would be proud! We serve tuna tartare and foie gras and brisket, open a bottle of Glenmorangie. Someone shares a thought on the Torah portion; a song is sung. Our children sit around the table, wearing matching outfits, listening carefully.

Every week, at the Shabbat table, we gather and talk about the dangers of open borders, the specter of socialism, the comic fragility of liberals. MAGA! The embassy! Baruch Hashem!

And in the kitchen, there is a woman.

She is cutting fruit for dessert. Scrubbing the dishes we just dined on.

She thinks to herself in Spanish as she chops the vegetables for matzo ball soups, wipes down the counters, mops the floors, bleaches the toilets — just as we recline on sofas in the next room, discussing a viral meme depicting Donald Trump as the iron-fisted messiah.

Here is the secret that no one wants to talk about:

The very Jews who are writing so passionately in their local publications about the irrelevance of the immigration crisis to our community, releasing statements about ‘sober’ responses to the immigration crisis, posing for photo-ops with those who have promulgated these inhumane policies — it is often these very people who rely on cheap, undocumented immigrant labor in their day-to-day lives.

Whether in Lakewood, Long Island or Livingston, many Trump-voting Jews employ undocumented Mexican and Central American immigrants in their homes and businesses. Some live in, some live elsewhere and commute daily for long hours. Some are paid below minimum wage. Some are shipped down to Florida for Passover hotel programs.

Yet these same Jews stay silent when it comes to the inhumane treatment of immigrants on our border. While the ‘Torah Trumps Hate’ group is getting some attention, it is still a fringe group in the Orthodox community. After all, it is considered a social faux pas for “respectable” traditionalist leaders and thinkers to vocally defend anyone outside our community’s walls. That is something that only liberals do, in other denominations.

So instead, we talk about how “this isn’t our problem.” “Let’s stick to our community’s issues.” “It’s really quite complicated.” I have yet to see the throngs of ‘my own’ speaking up, beyond the requisite lip service from self-appointed community representatives. The Orthodox Union released a statement condemning family separations at the border only after the organization sparked an uproar for awarding Attorney General Jeff Sessions a “justice” award.

But once the cameras are off and the press releases sent, in social media threads and WhatsApp conversations, I am shocked by a certain ugliness that I now wish I never saw, in many of the conservative Jewish circles in which I often find myself.

There is a certain cognitive dissonance here — the way it is socially acceptable in our community to talk about “migrants” who are “storming the border,” and the reality with which those very immigrants live (invisibly) in the intimacy of our homes, schools and communities. Forget about the fact that we too were immigrants here not long ago, seeking asylum and often derided for it — there is a certain gall, a hypocrisy, in the way conservative Jews effusively support the demonization of these newcomers while secretly continuing to benefit from their labor.

It is these immigrants who build Jewish homes, renovate kosher kitchens, construct yeshivas and nursing homes and sprawling real estate developments. It is these domestic workers who have keys to their employers’ homes, pick up their children from school, care for their elders. We entrust them with our most prized possessions, yet apparently, we cannot bring ourselves to defend their basic rights.

Have you looked in the mirror?

And if you have — if you have the humanity to do so — how can you remain complicit? How can you continue supporting an administration that systematically dehumanizes others? That describes asylum seekers as “infestations”?

We are wealthier, and more privileged today, than ever before.

And as a child of Soviet refugees myself, I find it slightly nauseating to acknowledge this new privilege.

I was happy to see that the ultra-Orthodox newspaper Hamodia ran an editorial on June 20, with the headline, “Where have we gone wrong?”, illustrated with an image of an immigrant child. I hope this will be a moment of reckoning for us. Perhaps this community will wake up and realize that we have gone wrong by largely supporting an ideology that equates human compassion with weakness.

These days, I am haunted not so much by the photographs of immigrants on the banks of the Rio Grande, but by the distinct memory of my tenth-grade Prophets teacher, petite and short-wigged, modest. I can still hear her screaming the Isaiah verses, zealously, in Hebrew:

“What need have I of all your sacrifices?” says the Lord. “I am sated with burnt offerings of rams, and suet of fatlings, and blood of bulls…Trample My courts no more; bringing oblations is futile, incense is offensive to Me…Your hands are stained with crime…Cease to do evil; learn to do good. Devote yourselves to justice; aid the wronged. Uphold the rights of the orphan; defend the cause of the widow.”

We have lost our way. We are busy with our rams and fatlings and blood of bulls, our black hats and glatt-kosher-mehadrin-mehadrin 40-denier-tights and hashkama minyans, our early prayer services — while willfully ignoring the strangers, the widows and orphans, even in our very own homes.

We have grown complacent, fattened by our wrist watches and our Passover hotel programs, apathetic to those around us.

I am afraid for our people.

I am afraid for our moral character, our communal conscience.

God Himself reminds us of the dire consequences of this apathy. As He warned Isaiah, in that very same passage: “And when you lift up your hands, I will turn My eyes away from you.”

We cannot afford to turn away.

Avital Chizhik-Goldschmidt is the life editor at the Forward. You can follow her on Twitter @avitalrachel or write to her [email protected]