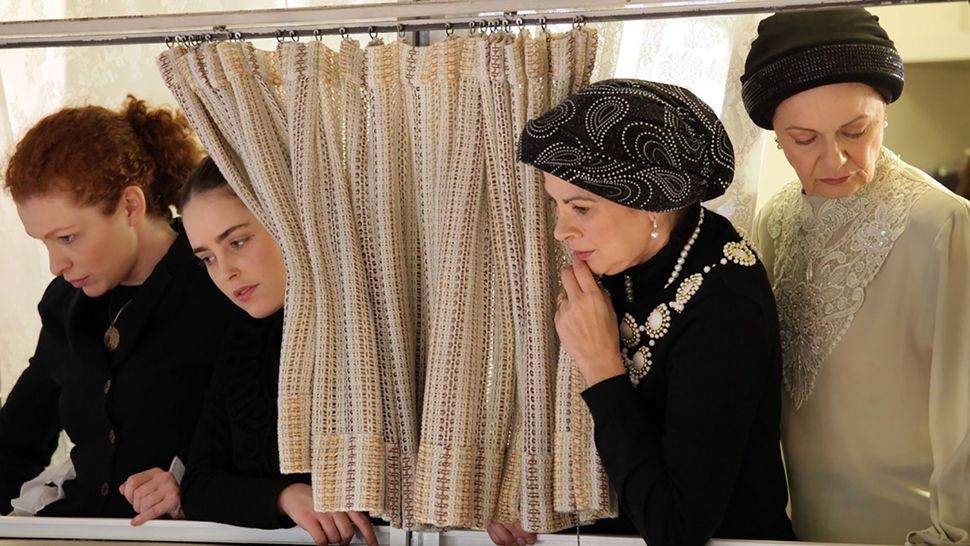 Image by Fill The Void film

In religious communities, the pitied are often easily noticeable.

In some communities, it is distinct to where they live and what positions they hold. In others, what they are allowed to wear. In all, it’s as obvious as a naked finger.

“No wedding band,” someone whispers in performative sympathy, fondling her own glittery ring. “Poor dear, single.”

Often, in the Orthodox Jewish community, the term ‘shidduch crisis’ is used to describe a surplus of single community members.

“I find that term deeply offensive,” said Dr. Sharon Weiss-Greenberg, executive director of JOFA, whose Facebook post on the subject garnered hundreds of comments about the hurt and shame singles in religious communities experience, prompting her to devote JOFA resources to initiate conversations about the stigma.

In a panel event organized by JOFA this month, experts from across American religious communities gathered to reflect on the stigmas of singlehood in their circles — something common across theological differences.

“It doesn’t matter what you do, how much you accomplish,” said Reverend Khristi Lauren Adams, a Baptist pastor and chaplain, who is the author of The Misinterpreted Gospel of Singleness: A Cultural Critique of Myths Surrounding Singleness in the Christian Community. “You’re lacking completeness without a spouse in tow.”

Tayyaba Bukhari, the CDO of MALIKAH, an organization that works to empower Muslim women leaders, echoed that thought. “Getting married [in Islam] is completing half of your religion…you attain more closeness to God…so it’s very highly encouraged and a very attractive thing to do,” said Bukhari. Bukhari explained that there is often tension between communal expectations and individual’s choice, which is especially fraught for first-generation American Muslims, as they navigate the values with which they were raised by conservative immigrants parents and the American culture that emphasizes personal desire.

And Mormons are no different, explained Dr. Sharon Harris, an assistant professor at Brigham Young University (BYU) who has lived in and studied in the Mormon community. In Mormon doctrine, only married individuals attain the highest level of Heaven. For unmarried individuals, there are “singles wards;” communities for single individuals.

“It’s supposed to be optional, and it is technically,” Harris told the crowd. “Except that means most singles move there [to singles wards], so you run the risk of feeling even more on the outskirts if you stay in a conventional congregation. So, I was in singles wards for many years, and there was a period where I was a middle school teacher…and I had the summers off….And I knew they were putting together youth camps, and I thought well, I’ve got some time that could be used to help. I went to the organizer and said, ‘I’m available, I’d be happy to help out.’ Not everyone volunteers to spend a week at youth camp! I thought they’d be excited about it. And she said, ‘Oh you know what? We’re fine. You just stay in the singles ward and date.’ I couldn’t give to the community. It was more important I do whatever they do in the singles ward…[instead of ] the opportunity for the youth to see somebody who’s participating, [who’s] accomplishing, [who’s] professional.”

Rabbi Abigail Sosland, Morah Ruchanit [Spiritual Advisor] of Schechter Westchester High School is recently married, but reflected on her years of being single in the panel discussion. “I have this deep, internalized shame I carried for decades.” She, too, was lectured with the same maxim of “You have free time? Date.”

“It took me so long to realize that this wasn’t okay,” she said. Sosland said that she would not be invited for Shabbos meals, the hallmark of Jewish communal life, because hosts feared her presence would make things awkward. At social gatherings, friends would coo over engagements and grandchildren, without any acknowledgment of personal or professional accomplishments of those in the room. Sosland said some singles feel they are treated inconsistently: “More is demanded of them to give to the community, assuming they have more disposable income or extra time on their hands, but the community doesn’t always take care of them to the same degree.”

Single women, in particular, experience a double standard, over single men. As Sosland described it, it’s the George Clooney versus Jennifer Aniston paradox: The single man breaks hearts while the single woman has her heart broken. For men, taking their time can be admirable: Building up a nest egg, climbing up the career ladder, and all sorts of accomplishments outside the home. Women are still defined so domestically, with marriage presumed to be not only a natural but an inevitable step early in life, preferably as soon as after she completes her schooling.

When asked about how to change the conversation, panelists agreed there is a collective responsibility to reexamine faith communities’ mindsets towards singleness.

Communities ought to celebrate personal and professional accomplishments beyond marriage and children. Sosland noted how grateful she had been to certain married friends who, when she was single, would make sure to include her in their events and sit alongside her so she would not be alone.

Bukhari said that part of dismantling stigma means empowering women to know their worth: “[Let] a girl, a woman, at any age, know her value does not come from a relationship with a man, but the relationship with herself and her God.”

Harris invoked the Mormon ritual of sealing, which is bonding individuals together eternally. While it most common between couples and between parents and children, Harris pointed out it has been used for friendships and close platonic bonds, emphasizing the importance of valuing non-familial relationships as just as enriching and valuable.

Rachel, a member of the LDS Church, was drawn to the panel because she admired Harris and her work in singles wards. “I love all of the research that [Dr. Harris] has done and all she has to say. And I think it’s fascinating to hear about the effect across various religions.”

Mohammad, who described himself as an “older single,” said that he found comfort in how the panel addressed the issue. “You can find these niche communities that have these small conversations, but they’re really meaningful and heartwarming.“

Another audience member, a young Jewish woman described the panel as reassuring, adding wryly, “I’m only 23 but I’m already starting to feel the pressure.”

“It’s a relief,” said an older single, who asked to not be identified.

“We hope that people will take the lessons and practical suggestions the panelists presented and make change in their communities,” said Rivka Cohen, program manager at JOFA. “As an organization dedicated to the mission of Orthodox feminism, we believe and know firsthand that no change is too small — even just being mindful of how we act and what we say and who we invite to our Shabbat tables can make a world of a difference. Most importantly, we hope that everyone will continue these conversations, both in their own communities and across faith divides.”