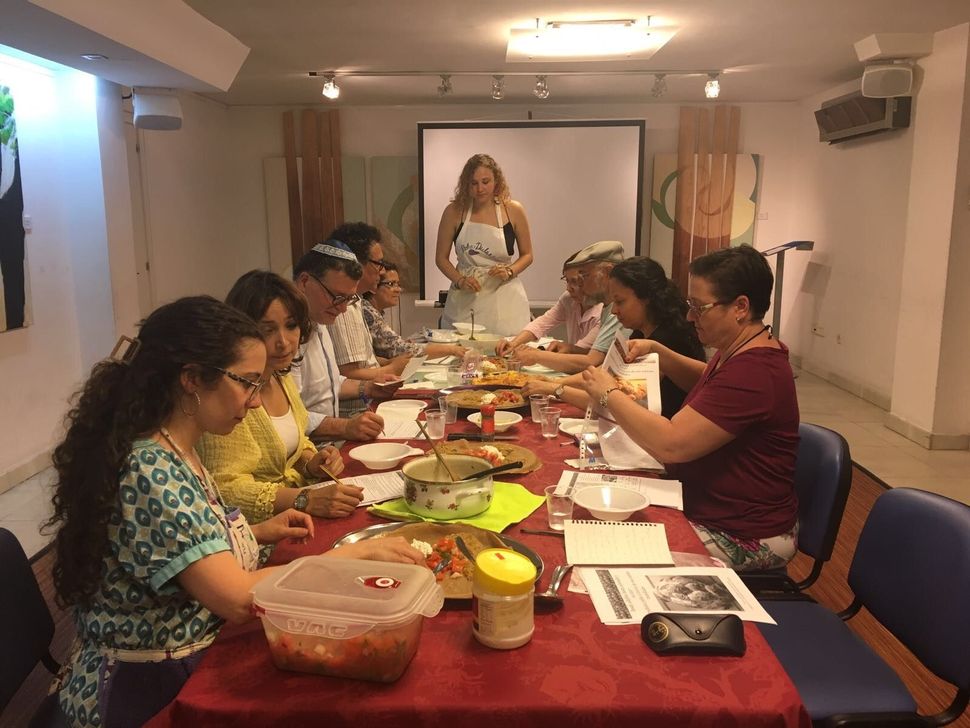 When Yael Cobano, the President of the Comunidad Judía Reformista de Madrid (CJRM) or the Reform Jewish Community of Madrid, planned her congregation’s potluck Rosh Hashanah dinner last year, she focused on nine ingredients. Members were asked to bring dishes that contained any of the following: Apples, honey, leeks, beets, dates, beans, squash, pomegranate, and fish. Known as simanim, these ingredients are essential in conducting a Rosh Hashanah Seder – a meal rich in symbolism in which each food represents one specific hope for the New Year. 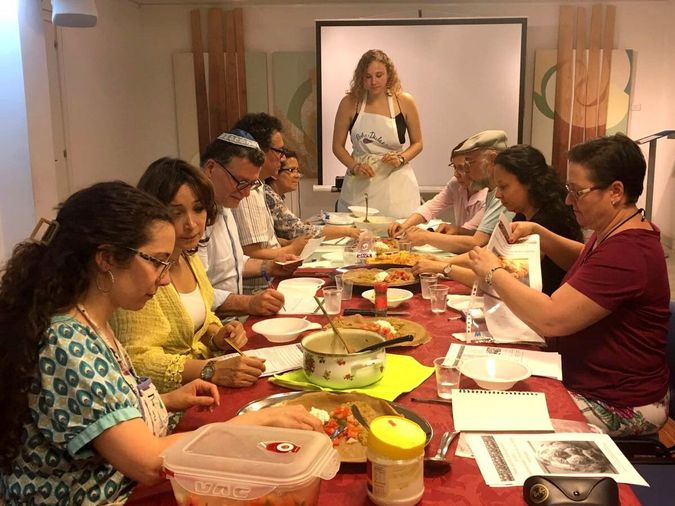 To have a Seder on Rosh Hashanah is a Sephardic tradition. While it’s not clear when it began, and whether Sephardim practiced it before their expulsion from Spain in 1492, some scholars point to one particular quote when discussing its origins. “One source that is used as a reference for this custom comes from the Babylonian Talmud (Tractate Horayot: Folio 12a): ‘Said Abaye: Since you hold that symbols are meaningful, every man should make it a habit to eat on New Year pumpkin, fenugreek (rubia/black-eyed peas), leek, beet and dates’,” said Ty Alhadeff, a Research Coordinator for the Sephardic Studies Program at the Stroum Center for Jewish Studies at the University of Washington.

The ingredients mentioned in the quote – as well as others adopted into the tradition as Jews traveled and settled away from Spain – aren’t accidental. Each symbolizes a wish, a yehi ratzon, a “may it be [God’s] will” that congregations and their members hope for in the upcoming New Year. The connection between an ingredient and the yehi ratzon it represents is most often based on word play, either in Aramaic or in Hebrew. For example, a Hebrew word for “date” is tamar – similar to the word tam, that means “to end”. The inclusion of dates in the Seder speaks to Jewish people’s hope that animosity against them will end in the New Year. 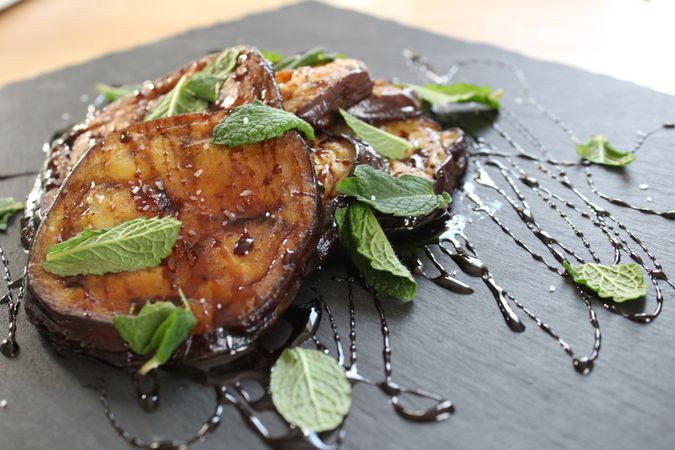 Much like during the Passover Seder a blessing is recited over maror or korech, so too is a yehi ratzon said for each ingredient during the Rosh Hashanah Seder. In previous Seders at the CJRM, the congregants said their yehi ratzon’s with the raw ingredients laid out on a Rosh Hashanah Seder plate. Dishes they made for the Rosh Hashanah meal itself didn’t necessarily include these symbolic simanim. Last year, however, Cobano and other community members decided to take their New Year celebration a step further.

Together with Sara M. Gardner, a Fulbright scholar who was researching the culinary heritage and cultural identity of Sephardic Jews, Cobano devised a menu around the nine symbolic ingredients. “Every family prepared a dish that had one [of these ingredients], varying between appetizers, main dishes, and desserts,” said Cobano. There were dates stuffed with goat cheese and salted almonds, an endive salad with pomegranate and tahini sauce, a squash soufflé with almond flour, black-eyed pea and coconut milk pudding, a fish stew, and an apple tart and a honey cake for dessert.

For Gardner, the Seder was a logical extension of the cooking class – “From Adafina to Schmaltz and Zaatar: the Jewish Tradition through its Global Kitchens” – she had organized for the Madrid congregation while living in Spain during her Fulbright fellowship. The class focused on teaching the culinary traditions across the Jewish diaspora and included Ashkenazi, Sephardic, Misrahi, Ethiopian, and Indian Jewish foods. “We made dishes and talked about the history and culture in all of those kitchens,” she said.

The class turned out to be more than just Gardner sharing her knowledge – while teaching, she was also learning. “It was enriching for me because when you talk about food, and Jewish food especially, everybody has a story, everybody has a memory of a grandmother or an aunt or someone in their family preparing a dish; or of the scent and the taste of a holiday,” said Gardner. “I [learned] people’s stories and the connection people feel to their different traditions and different foods.”

These stories and the recipes people made for the last year’s Rosh Hashanah meal became the basis of a cookbook the congregation decided to create. In conversation with congregants from the United States, Cobano realized that the idea of holding a Seder on Rosh Hashanah was a tradition virtually unknown outside of Sephardic communities. “We need to share this diversity, these customs with the rest [of the world]; it shouldn’t just remain here,” said Cobano. 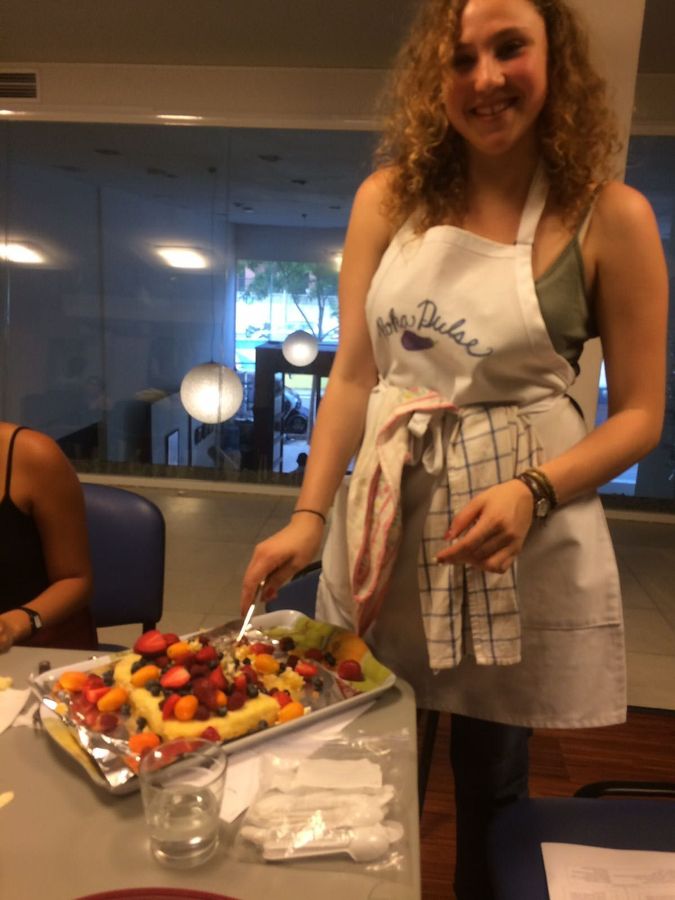 The diversity celebrated during those Shabbat dinners made it into the cookbook. Although inspired by the Sephardic tradition of a Rosh Hashanah Seder and organized around the simanim (each section is devoted to one of the ingredients and includes the yehi ratzon that accompanies it) the cookbook’s recipes hail from many different traditions. Some of these traditions serve as inspirations for the menus Gardner included at the end of the book. “There are geo-cultural menus like a Spanish menu, an Ottoman-Sephardic menu, a Mediterranean menu. They capture thematically the different stories and histories that come out through the introductions to all the recipes throughout the cookbook,” said Gardner.

The Madrid Reform Jewish community plans to use the recipes from the cookbook for this year’s Rosh Hashanah, and they hope that Jewish people around the world will also partake in the tradition through this book (it will be published in English). They’ve filmed a video to supplement the information provided in the book and to share their approach to organizing a Rosh Hashanah Seder. For them – a nascent congregation in Madrid – this cookbook is more than just a collection of recipes. It’s also a story of a community in the making, a medium through which they hope to connect with other Jews, and a contribution to the developing history of the modern Spanish Jewry.

Margarita Gokun Silver is a writer and an artist living in Madrid, Spain. You can see more of her writing at www.MargaritaGokunSilver.com and follow her @MGokunSilver.