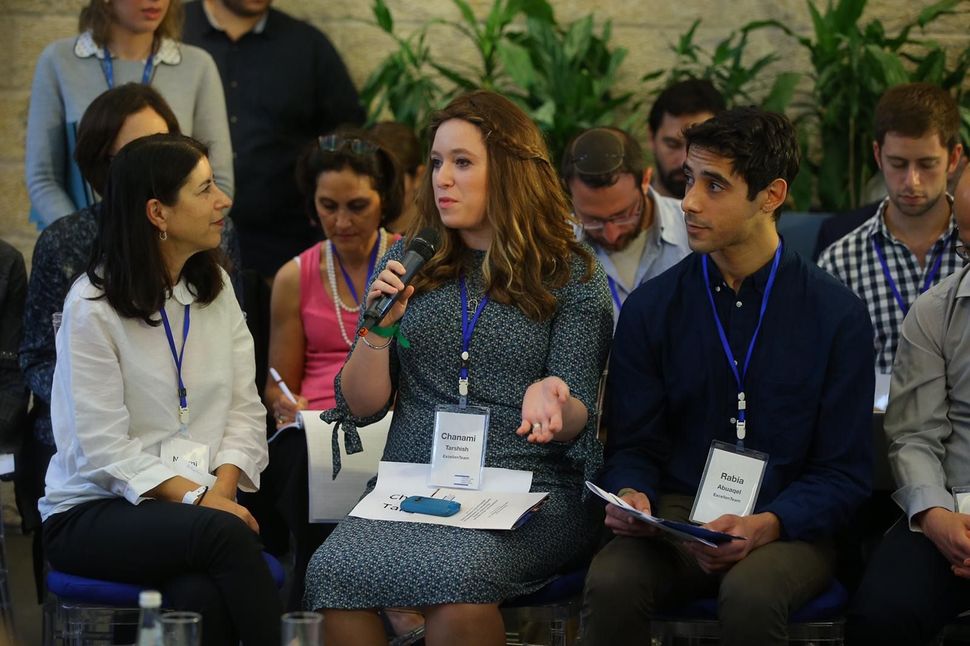 JERUSALEM – According to President Reuven Rivlin, Jerusalem “is a microcosm of what is going on all over the region.”

While that may or may not be true, the city’s varied and diverse population — comprised of Muslims and Jews, religious and secular — certainly isn’t representative of the industries that have made the start-up nation famous around the world.

Israel is famous around the world for its thriving high tech sector, garnering billions of dollars flowing into the country. However, the profits of this boom are unevenly distributed — the vast majority of those reaping the benefits, seventy-five percent, are Jewish men, according to Start-Up Nation Central, an Israeli non-profit. Women comprise less than 24 percent of the hi-tech workforce and Arabs just under one and a half percent. Haredim, Israel’s ultra-Orthodox, are even less involved, representing less than one percent of those working in the so-called Silicon Wadi.

In an attempt to alleviate the problem, Start-Up Nation Central — in partnership with the President and tech giants such as Google and Western Digital — has launched Excellenteam, a program providing supplemental training to Arab and Haredi computer science graduates to better integrate these “grossly underrepresented” minority groups into the industry.

The three-month program, whose curriculum was developed in collaboration with industry insiders, is meant to fill in its participants experience gaps, explained Yishai Goldstein of 40 Nuggets, one of the corporate partners.

“It’s not pure charity,” he explained. “There are advantages to the companies as well. The basic idea is that these people don’t know how to pass interviews and there might be difficulties from a social aspect. They are missing core things that people from other backgrounds may have learned like,” in the case of the Haredim, “basic math and [familiarity] with the basic technologies that are out there. We mentor them and show them what we are looking for. We are looking to employ tens of programmers and they’re hard to find.”

According to Start-Up Nation Central CEO Prof. Eugene Kandel, the dual challenges of lack of social mobility and a shortfall of 15,000 skilled professionals is “threatening society.”

Prof. Amnon Shashua, the CEO of Israeli technology firm MobileEye, at whose corporate headquarters the program’s launch was held on Thursday, agreed. On the one hand, he said, “because of the size of our society, we suffer from a shortage of talent,” he said. On the other hand, “we have two big sectors which, each for own reasons, are not integrated into the fabric of the economy and especially the hi-tech economy.”

Speaking with The Forward, Chanami Tarshish, an ultra-Orthodox Excellenteam participant, explained that while she had studied programming in college, she found her subsequent employment as a web developer unfulfilling.

“I found the job boring and did not feel like I was challenging myself,” she explained, echoing a common sentiment that Haredi women in tech are usually under-utilized, relegated to working in quality assurance or other low level jobs. And while there are many in her community who eschew the Internet and computers, they have penetrated enough into the insular world of tech that nobody gives her a second look when she uses her rabbinically-approved “kosher” smartphone with its limited catalogue of apps.

It is this kind of thinking that KamaTech has been encouraging through its own mentoring programs. A program run by ultra-Orthodox Jews that works to foster “Haredi technological leadership,” KamaTech was founded by Moshe Friedman, the great grandson of the founder of the fundamentalist Orthodox Council of Jerusalem.

Haredim want to integrate into the economy while maintaining their own unique lifestyle, he said, claiming that more than 20,000 Haredim had approached his organization over the past half decade. “Because we are so strong and big, we can integrate without fear,” he said.

While such a goal may seem far off given the prevalence of full-time Torah study among Haredim and the low level of secular education provided in their schools, their rate of workforce participation has improved dramatically since the early 2000s. According to Dr. Gilad Malach of the Israel Democracy Institute, in 2003 Haredi employment numbers were at their lowest ebb, with only 36 percent of Haredi men and 51 percent of Haredi women working. However, the government’s decision to cut child allowances around that time provided a very strong incentive to go and look for work and, together with the development of new gender-segregated higher educational frameworks, managed to boost workforce participation to 51 and 73 percent respectively.

The problem, he explained, is that while workforce participation was up, the number of families living under the poverty line didn’t decline, remaining around 55 percent. Since then, the government’s focus has been on helping Haredim enter “professions that are more important for the labor market like computers and engineering”; over the last two years, the number of families living in poverty has dropped by nine points.

In the Arab sector, the problem is very different, said the IDI’s Nasreen Hadad Haj-Yahya.

While the educational system, like that of the Haredim, is problematic, she said, there are other challenges. Many Israeli-Arabs work in demanding blue collar jobs such as construction, and are forced to retire earlier than their white collar counterparts due to the work’s physical toll. Their children are then forced to cut their own educations short in order to help support their families, perpetuating this cycle of poverty, said Haj-Yahya. The lack of technology companies operating in Arab areas, combined with the low level of Hebrew language education, also contributes to the problem. Unfortunately, according to Haj-Yahya, there is no organized inter-ministerial effort that would allow the problem to be treated holistically.

“There is [also] a lot of discrimination against the Arab population and this is also part of the problem,” she said. Despite this, over the past twenty years, the number of Arab women in the workforce had tripled to thirty percent.

Next year, half of Israel’s first graders will be either Arab or Haredi, President Rivlin said on Thursday. “This can be very dangerous,” he said, if they are not given the skills to properly integrate into Israel’s increasingly high tech economy. “When [secular Israelis] were 80 percent of the population, we could take everyone on our back, but when we become 50 percent it’s impossible. We have to understand that we are all together and we have to take care of all of us. Here we are all Jerusalemites and Israelis. The gap between Arabs and Israelis can be bridged.”