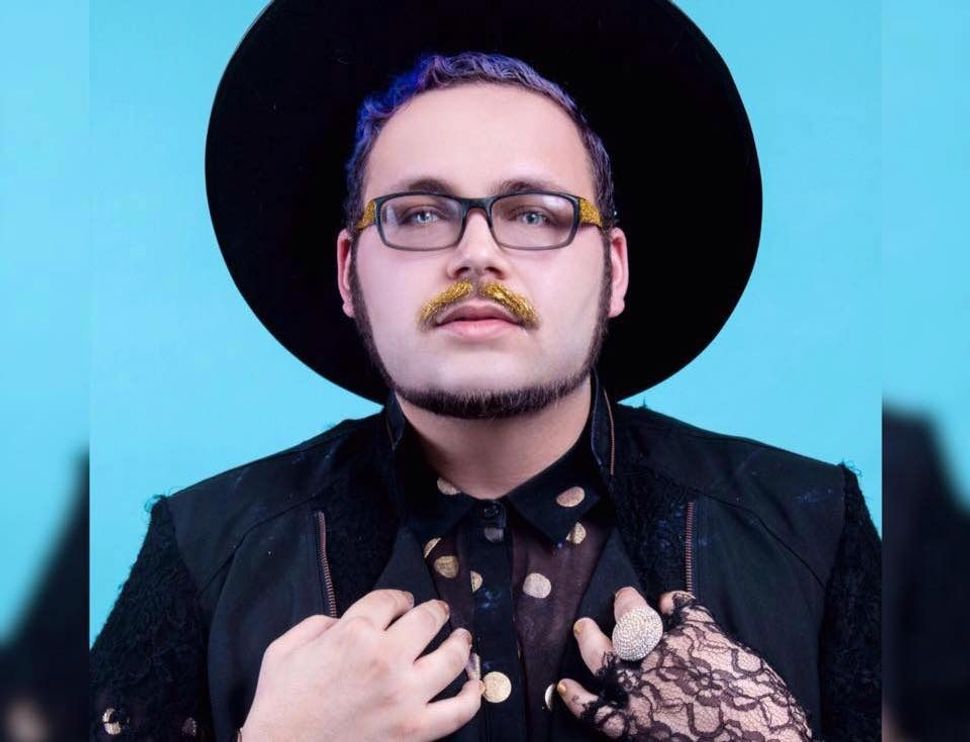 Not every bearded drag queen can play the ukulele in a towering purple wig and a dress made of balloons.

But Eric Jaffe has turned that schtick into a burgeoning career in Philadelphia, where he’s become a nightlife staple.

And the mold-breaking performer says that his Holocaust-survivor grandparents are partly to thank for his success.

“Absolutely, some of my fearlessness comes from them,” Jaffe told the Forward. “They had amazing stories. And they were both incredibly supportive.”

Jaffe is having a big year. The monthly revue he hosts fills local Philly bar Tavern on Camac. He made his New York debut in December, performing at Alan Cumming’s East Village boîte Club Cumming. At an annual drag competition this fall, Jaffe walked away with three awards, including Philadelphia’s Drag Queen of the Year. And he’ll premiere his raunchy parody of the musical classic “Sweeney Todd” this month. “The full 90 minutes, but with very different words” he teases. “Thweeney Todd, the Flaming Barber of Fleek Street”, will debut at Philly alt-performance venue Franky Bradley’s January 26. Judge Terpin — in this case, “Judge Twerkin” — doesn’t stand a chance.

Jaffe grew up “pretty religious” in Cheltenham, just outside Philadelphia. “Every Saturday, as a kid, we were at Beth Shalom, the Conservative shul in Elkins Park,” he said. “We observed all the holidays, I got bar-mitzvahed, and I attended Hebrew school all the way through high school. I still consider myself a cultural Jew.”

Jaffe’s drag may not quote anything he learned at Hebrew school, but his upbringing had a huge influence on his work. “Among the Jewish community here in Philadelphia, the way I was raised and taught in my synagogue was that there are all kinds of people in this world, and that everyone deserves to be treated with respect,” he said. “We were never taught to judge anyone based on their lifestyle choices.”

A theater major at Florida Atlantic University, Jaffe “wasn’t getting cast too often in shows.” So he took up the ukulele – “a pretty silly and funny instrument”, he said. He started playing in local bars, performed at open-mic nights, and wrote an entire ukulele musical. His practice paid off in 2015, when he won a worldwide ukulele championship with a hastily recorded performance video.

Along with the instrument and his biting song parodies, Jaffe also includes a healthy dose of Yiddishkeit in his raucous performances. “I’ve got a ‘Santa Baby’ song parody called ‘Santa Bubbie’,” he laughed. “It describes that if Santa were to come to my Jewish household on Christmas Eve, he’d get gefilte fish and matzo-ball soup. My family’s Jewish humor helped me learn to not hold back. When we were together, it was joke after joke, just a natural thing.” Jaffe’s parents, a lawyer and publisher, passed away when he was in his early 20s.

Over the recent Christmas holidays, Jaffe hosted “Oy to the World,” a night of Jewish-only drag. Is there some kind of sorority among Hebraic queens? “We’re all somewhat connected,” he laughed. “In Philadelphia, there’s, like, four of us. When I’ve met a Jewish queen, you connect a lot easier.”

Today, he’s magnified his idiosyncrasies into the larger than life drag persona – including a very Talmudic-looking beard. “I keep my beard for a perspective on gender,” he said. “You can be feminine and have a beard and hairy chest. Or have a mix of the two. You don’t have to commit yourself.”