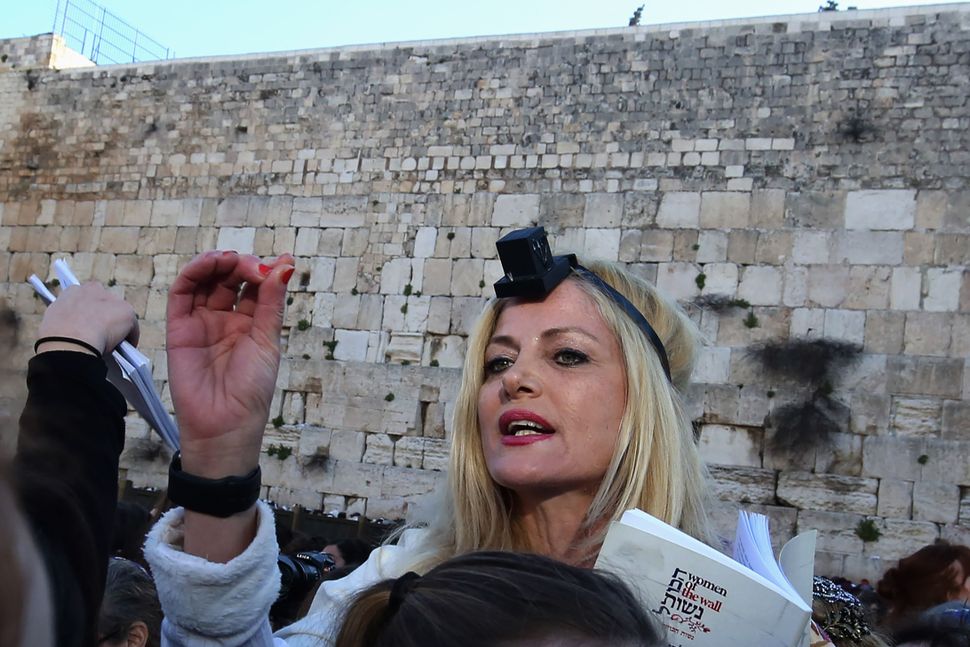 A member of the liberal Jewish religious movement ‘Women of the Wall’ (WOW) wearing ‘Tefillin’ or phylacteries (small black leather boxes containing scrolls of parchment inscribed with Torah verses), and ‘Tallit’ (traditional Jewish prayer shawls for men), prays during an event marking the organisation’s 30th anniversary and the start of the Jewish month (Rosh Hodesh) of Adar Bet, at Judaism’s holiest prayer site of the Western Wall in the Old City of Jerusalem on March 8, 2019 Image by Getty Images

There are literally hundreds of different ways of choosing, wrapping, and storing a set of tefillin [phylacteries]. Eichler’s Judaica superstore offers more than 2,000 tefillin-related items for purchase online alone, from a Swarovski crystal adorned bag, to a military camouflage case, and a strangely economical set of blinged-out gold plastic storage boxes—all to compliment the numerous styles of tefillin available. The tefillin themselves vary in size, according to left or right-handed preference, as well as Sephardi or Ashkenazi affiliation.

And yet, even in an increasingly inclusive American Jewish community in which it’s common to find Jews of all backgrounds and beliefs wearing tefillin, going to a Judaica store to try on tefillin in person can still feel surprisingly intimidating, for those on the margins — like a bad flashback of Yentl at the book peddler’s cart. There isn’t a single store in the United States with a written mission to warmly welcome all Jews to try tefillin on — and the fear of being judged, harassed, or simply grouchily attended to, overshadowing the decision to take on the mitzvah — is real for some women, transgender, and non-binary Jews.

“I feel self-conscious when I go into a Judaica store when I buy books for school,” said Frankie Sandmel, a rabbinical student at Hebrew College. “Like I don’t look like the kind of Jew who buys books at Judaica store. Tefillin is such an intimate practice and part of my intimate relationship with God. I didn’t want it to involve feeling self-conscious.” As a result, Sandme ended up asking their father to bequeath them a brother’s unused set of tefillin. The choice is meaningful, as “putting them on has helped me feel connected to my family in a real way,” they say.

But many people don’t have anyone in their lives willing to gift them a spare set of tefillin. A premium handmade set of tefillin can set you back $1,100. For even more cash, you can commission a sofer (scribe) to create your own bespoke set aligned with your specific customs and body type. For those with limited funds, a basic kosher set of tefillin starts at $150 but those are clunky, with painfully stiff, broad straps and glue that wears down quickly. But hey, don’t sweat the cost if you’re a Jewish man: various highly subsidized programs such as The Ichikowitz Family International Tefillin Bank will comp the cost of your first set (provided you’re an adult Jewish male, of course).

Ladies and non-binary folks are meanwhile left out in the cold. Unlike tallitot [prayer shawls] and kipot [skullcaps], which can usually be borrowed from the communal baskets at the back of most American shuls, tefillin are rarely offered. After converting to Judaism and taking on tefillin, Rabbi Elizabeth Bonney-Cohen of Kehillath Israel in Brookline, MA was put off by phylacteries on more than one front. For starters, as someone who chooses to dress modestly, it was awkward to roll up her shirt sleeve in mixed company. Then, the wrapping act itself translated as overly masculine and constrictive. She remembers, “All the tefillin I first saw were really large and didn’t look like they would fit my body. It sounds silly that something so superficial could be a barrier, but they were just these big black boxes I was supposed to be strapping to my body.”

She eventually found her bashert set of tefillin at the Women’s Tefillin Gemach, an organization founded to collect and refurbish donated tefillin and then loan or sell them to women who need a set at an accessible price point. Bonney-Cohen was able to try a variety of tefillin, eventually settling on a small refurbished set with softly broken-in leather from the previous owner. “This felt anything but harsh,” she reflected. “This felt warm and it called to me. I kept wondering: who owned this and what memories are literally wrapped up in this tefillin?” Today, the sensation of the straps provides a real sense of peace for her, she says. “Rather than being bound in chains, I feel bound by a swaddle.”

Alexandra Casser, who took over the management of the Women’s Tefillin Gemach and is part of Stam Scribes — a talented collective of progressive Jewish scribes — is the one to receive donations, take them apart and inspect them, then repair the tefillin to meet the laws of kashrut. She says that the demand for these female-friendly tefillin outweigh the stock received from Jews all over the world, and she is always on an active hunt to receive more tefillin.

“Tefillin can be divided into two major types,” she explains. “Gassot, which are heavier and thicker, or p’shutim, which are thinner. The trend today is towards very large tefillin.” However, bulkier tefillin don’t suit all body types, and those with slender arms, or who cover their heads with mitpahat (scarf) might struggle to keep them on comfortably. For those without access to older tefillin, which tended to be p’shutim, or the funds to commission something bespoke from a sofer, the Women’s Tefillin Gemach (which is run out of Stam Scribes) might just be the answer.

And once you’ve managed to find the right tefillin, how do you learn to wrap them?

Rachel Putterman, who is studying to be a rabbi at Hebrew College, struggled to find instructional videos. “I went on YouTube to learn and it was all Orthodox men in their basements. Given that women have been ordained since the 80’s and have been wearing tefillin in decent numbers since then, it’s ridiculous that a resource didn’t exist,” she says.

In an effort to make wrapping tefillin feel more comfortable to all, she and a super-diverse cast of 10 Jews (including those who identify as Transgender and Non-Binary), came together on a shoestring Kickstarter budget to film All-Genders Wrap, a video in which Jews of all backgrounds show how they lay tefillin. The result is a Utopian vision of a Jewish community—one in which all are welcome and wearing tefillin isn’t controversial or intimidating for anyone. When it comes to donning tefillin Putterman says, “These kids in their 20’s don’t, in my experience, have any kind of baggage.”