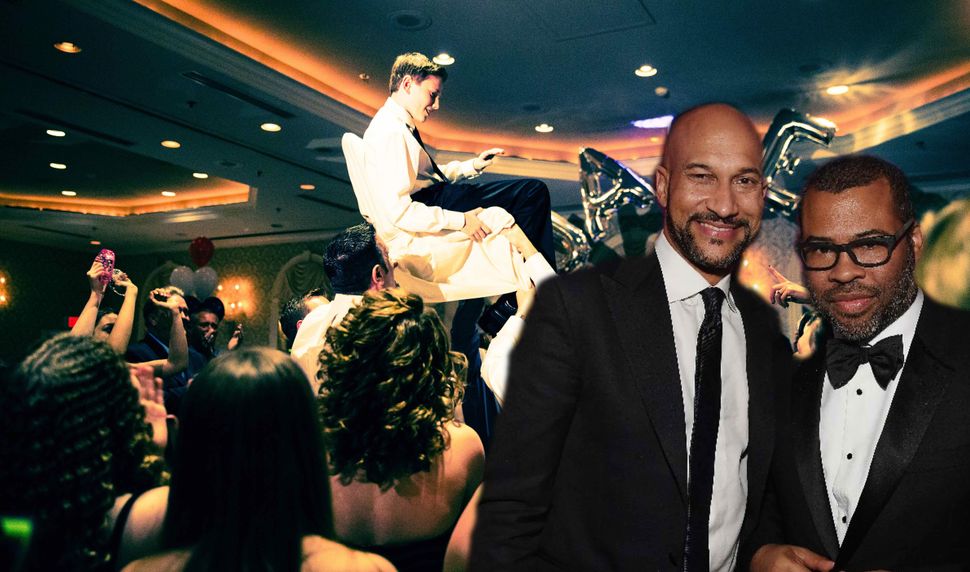 Every day this week we’ll be highlighting classic and cutting-edge Jewish comedy, including the top Jewish comedians of the Trump era, and the best ever Jewish memes. L’chaim!

Who gets to joke about Jews?

The correct answer to that question is: Jews.

Safe to say this bit would sound slightly different if it were coming out of the mouth of Johnny Carson.

“Really? Only Jews can joke about Jews?” you ask. Yes, really! Except in the following cases.

The Forward has determined by both scientific method and deep kabbalistic study that the following jokes, from non-Jewish comedians, are not only allowable but funny. They are funny because they reflect a considerable knowledge, and perhaps event respect, for Jewish faith or culture — they are instances of tough love and familial elbow-jabbing, not stereotyping.

Thus we present, in order from least to most Jewwiest, the best Jew-jokes by non-Jewish people:

Jewish circumcision jokes are a dime a dozen, but it’s hard to write a good one, let alone one that doesn’t unfairly demonize Jews for the ancient (and very safe!) practice. Case in point: This video appears to have been posted to YouTube by someone — username NATIONALCOMMUNISM666 — who thinks circumcision is a crime.

But Ryan nails this one not by joking about circumcision itself, but by jabbing at Jews for thinking about baby dicks — to the point that the fate of their hypothetical baby’s dick is enough to make Ryan’s Jewish boyfriend break up with her.

This clip comes in the third episode of the first season of “The Sopranos.” A Hasidic rabbi has hired Tony’s crew to obtain a get, a Jewish document of divorce, from his abusive son-in-law — by any means necessary. Unfortunately, like the Jewish people, the son-in-law’s will to survive surpasses the lengths to which our beloved wise guys are willing to go to beat the get out of him.

The son-in-law then likens his resolve to the Jews of Masada, who held out against the Roman army and chose suicide over surrender. “And the Romans — where are they now?” the son-in-law asks, rhetorically. But Tony responds, “You’re looking at em, asshole,” poking a big, fat hole in both the son-in-law and the entire Jewish people’s fantasy of unbreakable survivorship.

Michelle Wolf has made no secret of her feelings about the House of Trump. In this riff, she goes after First Daughter Ivanka. Wolf had already made headlines for comparing Ivanka to herpes. (In the below episode, she also compares Ivanka to a tampon: “She shouldn’t be left in the White House for more than eight hours.”)

Wolf notes a CNN article noting that Ivanka is America’s most powerful Jewish woman. Wolf begs to differ: If Ivanka could only run her clothing business into the ground, how many Jewish immigrants who worked in New York’s Garment District are more likely to qualify for that title?

This joke comes from one of Chris Rock’s highest energy sets, when he made Robin Williams look like a tranquilized zoo animal. Granted, it’s a joke about black people, for black people: “Black people don’t hate Jews. Black people hate white people. We don’t got time to dice them up into little groups!”

But the straightforwardness of Rock’s claim — coming off a reference to Louis Farrakhan, no less — is a funny reminder to Jews that some of the minorities we think hate us have bigger systemic fish to fry. If only Rock’s words were applicable in 2019. Start watching at 45:00.

Mulaney has made some serious lemonade from the lemon that is his Jewish wife, Annamarie Tendler. He’s joked about her on several occasions, poking fun at her ignorance of Catholicism, her pushiness, and the general tell-it-how-it-is-ness of Jewish women.

What sets this Jewish wife joke apart from the others, and from other wife jokes, is that it hints at the problems inherent in Mulaney’s reliance on Jews for humor simply because his wife is of the tribe. It also makes fun of Nazis, for bonus points:

“And now there’s Nazis again! When I was kid, Nazis was just an analogy you’d used to decimate your child during an argument at the dinner table. There’s new Nazis. I don’t care for these new Nazis and you can quote me on that. “Oh, Jews are the worst and Jews ruin everything and Jews try to take over your life.” It’s like, “You know what, motherfucker? My wife is Jewish. I know all that. How do you know all that?” I’m allowed to make fun of my wife. I asked her and she said yes.”

This joke is a companion piece, in spirit, to Chris Rock’s joke about black people hating white people, not Jews. In his “Racial Draft” sketch, from his legendary show “Chappelle’s Show,” Chappelle imagines that the races of America — the whites, the blacks, the Asians, the Jews, the latinos — are drafting either racially or culturally ambiguous Americans for their race.

The Jews, when their turn comes, sidestep the obvious choice — Madonna — and pick a winner: Lenny Kravitz, born of a black mom and a Jewish dad. Part of the humor here is pointing out American Jews’ inborn love of African American culture.

But then Chappelle sharpens the jab just above the competition: One of the draft’s announcers notes that Kravitz’s father was the lawyer for his actress mother before they got together: “Couldn’t make that up.”

This sketch is Jewish absurd humor par excellence — shul, in this case, means a guy in a bear costume with hula hoops and football players practicing field goals. Why? Partly because Jewish guilt is so powerful even an Irish Catholic can feel it, and partly because, with all their coaxing, you can be forgiven for wondering just what is going on at the shul the Chabad guys are always inviting you to. And partly because it’s just fun to say, “Shul.”

Jewish men are often hairy. Some have some light shading about the chest. Others are covered in long bristles, like certain species of jungle vine. As it happens, 23andMe told me that I am missing a particular genetic marker for excessive body hair. How could they have gotten that so wrong?

Two circumcision jokes made the list, of course. We Jews are sensitive about the practice in more ways than one, so it takes a special comedian to make us laugh over it without shaming us. And who is more special than Robin Williams? He was an “honorary Jew,” according to many obituaries. He reportedly once admonished a German reporter who asked him why there wasn’t so much good comedy in Germany: “Did you ever think it’s because you killed all the funny people?”

This joke comes in the midst of a re-telling of the bible, both the Torah and the New Testament, in typical hyperthyroidal Williams fashion.

“Is there a Daniel Rosenblum in the hizzay?!”